The Best Things To Do And See In Pacifica, California

If Berkeley is San Francisco’s hippie cousin, then Pacifica is the city’s cool, underrated sister to the south. It’s a town known for its perpetual fog, surf scene, and small-town charms, but it’s so much more than that. Here are the top spots you should check out in Pacifica.
Pacifica’s Mori Point & San Pedro Rock © John Menard/Flickr

Bakery, American
Devil’s Slide | © Jitze Couperus/Flickr
If you’ve never had a cannoli from Mazzetti’s, do yourself a favor and drive down there immediately. Mazzetti’s Bakery is the ultimate place for sinfully delicious treats (think your favorite bakery on steroids). It’s a tiny location, and it can get rather crowded with lines going out the door on occasion. Basically, if you want to show someone you really care about them, get them something, anything really, from Mazzetti’s.
More Info
Open In Google Maps
101 Manor Drive, Edgemar - Pacific Manor, Pacifica, California, 94044, USA
+16503551007
View menu
Visit website
Visit Facebook page
Send an Email
Give us feedback

Who knew a 20 to 30-minute drive could be so beautiful? Devil’s Slide serves as the gateway to Half Moon Bay and all that lies beyond. Though once deemed ‘hellish’ for its rock-slide-prone sections, it’s since received a ton of structural overhaul and repositioning to ensure its stability. It has to be one of the most gorgeous sections of Highway 1. Every turn reveals a new, breathtaking view of the Pacific that even the occasional tunnels can’t diminish. It’s the perfect escape for a lazy, sunny Sunday afternoon.

Family owned and run for nearly 30 years, Colombo’s is the ultimate small-town Italian deli. If you try one of their many massive sandwiches (the ‘Godfather’ is a particular local favorite), be prepared to save half of it for later as they are a true test for anyone’s stomach. The main reason it’s on this list, though, is the bread. Baked fresh every morning, no bakery or delicatessen in the Bay Area can top it. 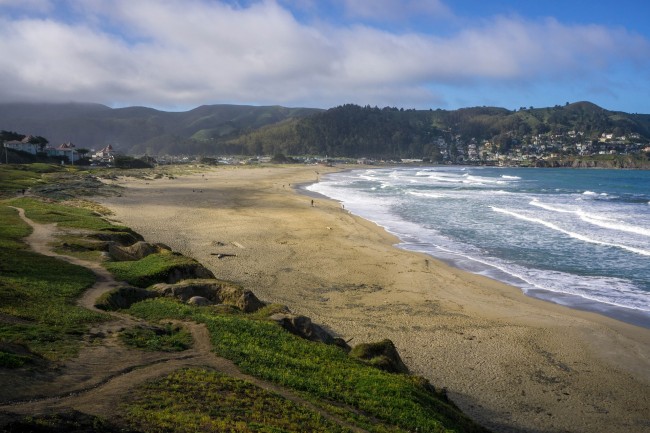 Forget Rockaway Beach, Pacifica State Beach is the place to be if you’re looking to try somewhere new, underrated and gorgeous. It’s located in the Linda Mar neighborhood (which happens to get some of the best weather in the entire city, fighting the stereotype of the ever-present fog looming over it), and it’s known for some pretty killer sunsets. Parking is $4 for a half day (less than four hours), and there are public restrooms (and showers) at the beach’s entrance.

Camelot is legendary for its classic fish and chips (the closest to the real thing you can get on this side of the Atlantic). Having been a local staple for over 40 years, the restaurant is known for its charming British-themed ambiance and welcoming atmosphere combined with fresh ingredients and made-to-order dishes. If you’re going for the true gastro-pub experience, get your fish and chips with a pint of Guinness while you take in the colorful British memorabilia.

The Fog Fest has been a part of the social calendar for Pacificans since its establishment back in 1986. Now every September, members of the community come together to celebrate the arts, music, and crafts that punctuate the everyday lives of its residents. The weather is famously unpredictable, however, so be prepared. You may experience the legendary fog, the festival is named for, or you may happen upon one of the lucky few days when the entire town is soaked in sun. See the official website for more information.

Park
If you’re looking for a hike with gorgeous views, enjoy the nature that rests just a few miles outside of San Francisco at San Pedro Valley County Park. There are miles of trails that would please any hiker, with difficulties varying from easy to medium. Take the Brooks Creek Trail to see the waterfall, which drops 175 feet and offers some much-needed respite after a long morning hike. If you’re looking for ocean views, try the Montara Mountain Trail, which offers views of the Farallon Islands. Bonus: be on the lookout for horses as some trails allow for equestrian passage.
By Devon Delfino
More Info
Open In Google Maps
600 Oddstad Boulevard, Pacifica, California, 94044, USA
+16503558289
View menu
Visit website
Visit Facebook page
Send an Email
Give us feedback
Give us feedback