A casual walk around Los Angeles will expose you to so many murals that it’s almost easy to take them for granted. Public art can be found everywhere, from the individually designed LA metro stations to the utility boxes that dot the sidewalk. Here are some spectacular public artworks anyone can visit. 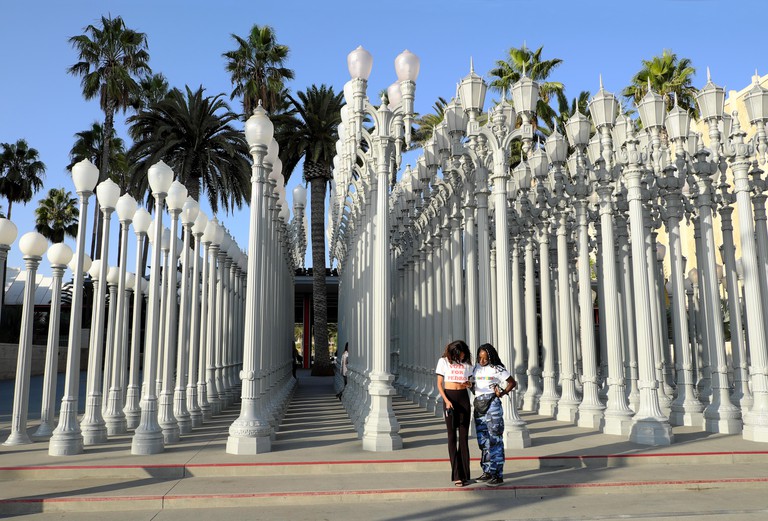 © Kathy deWitt / Alamy Stock Photo
Outside the Los Angeles County Museum of Art (LACMA) is Chris Burden’s iconic assemblage sculpture, Urban Light. You haven’t really visited Los Angeles until you’ve stopped by to take your picture among the 202 restored cast-iron streetlamps that make up the piece. It was installed in 2008 and has been featured in several TV shows and movies since, including American Horror Story: Hotel and No Strings Attached (2011), as well as numerous advertising campaigns and photoshoots. 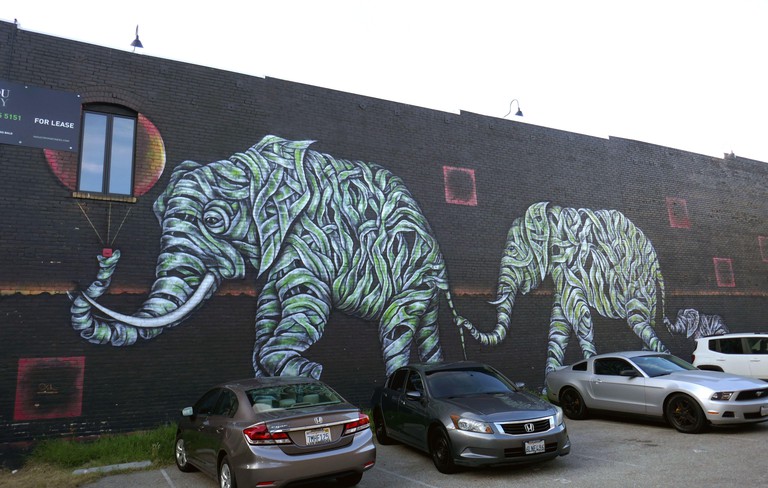 © Barry King / Alamy Stock Photo
The Alley Project comprises more than 100 murals by more than 85 artists hidden among the alleys of Historic Filipinotown. Gabba Gallery owner Jason Ostro had the idea to fill the neighborhood with murals to combat the graffiti in 2014, and the area has since blossomed with colorful pieces in every style. Find the murals by heading to the Gabba Gallery on Beverly Boulevard, and explore the small sidestreets surrounding it. (You can find a suggested route here.) There is also an additional alley in Echo Park near the Bob Baker Marionette Theater. 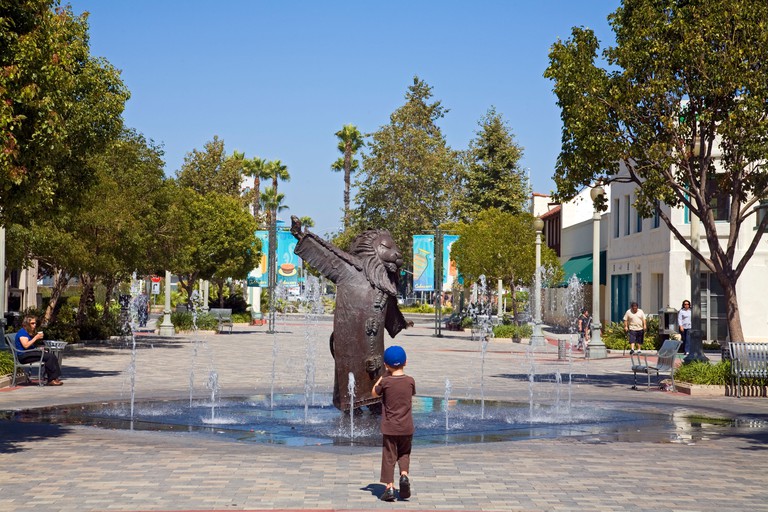 © Citizen of the Planet / Alamy Stock Photo
This whimsical fountain sits in Town Plaza in downtown Culver City, just steps from the Culver Hotel. Douglas Olmsted Freeman sculpted this commissioned piece in 2004, which features a kingly lion in a robe dancing among jets of water. During the day, it’s not uncommon to spot children playing in the jets to cool off from the summer heat. The inspiration for the lion came from Culver City’s history with both motion picture studio MGM and The Wizard of Oz (1939). Much of the cast stayed in the Culver Hotel when filming the movie. 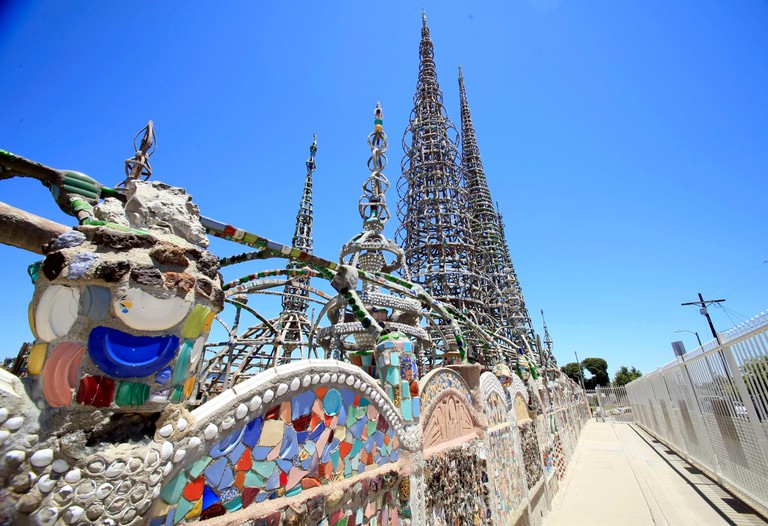 © mauritius images GmbH / Alamy Stock Photo
Simon Rodia, an artist and construction worker, constructed the Watts Towers over 33 years. There are 17 towers in total, the tallest measuring more than 99ft (30m). The towers themselves are made from steel rebar, concrete and wire mesh and then embellished with pieces of glass, seashells, pottery and tile. The towers were deeded to California in the ’70s, restored and then turned over to the City of Los Angeles in the 1980s. The LA Cultural Affairs Department cares for this stunning piece of public art and testament to perseverance today. 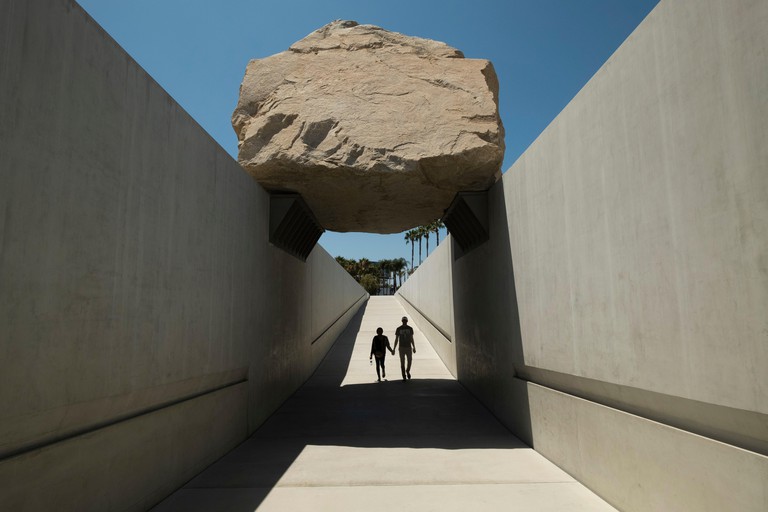 © Larry Brownstein / Alamy Stock Photo
Not far from Urban Light is another public piece on view at LACMA. Michael Heizer’s Levitated Mass appears as a large boulder suspended over a pedestrian pathway, allowing guests to stand beneath it. It comprises 340 tons of diorite granite and concrete. It was transported from a quarry in Riverside to Los Angeles, passing through 22 cities. 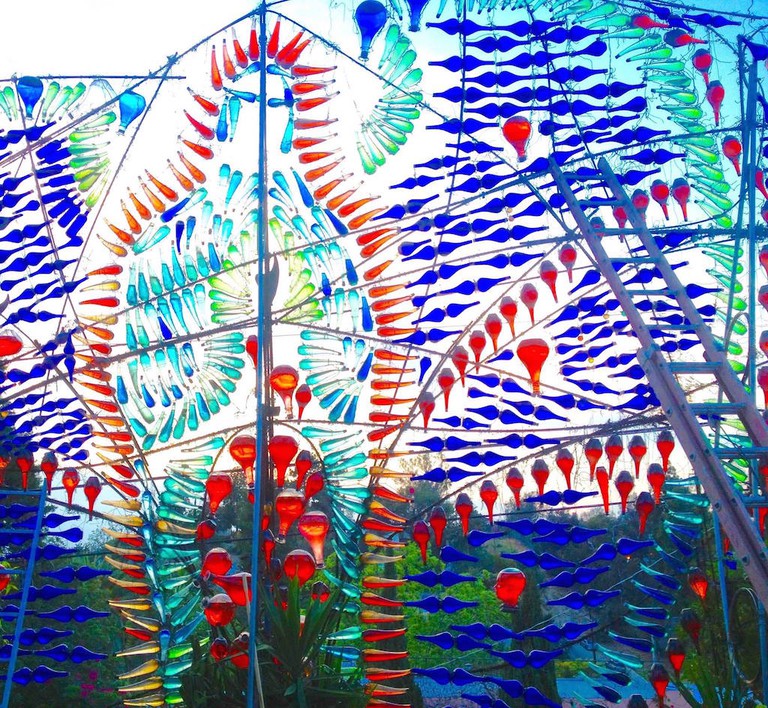 Courtesy of Randy Lawrence
Randy Lawrence has been building Phantasma Gloria in the yard of his Echo Park home for more than a decade. Lawrence suspended colored glass bottles full of water from wire to form a fantastical display – including an image of the Virgin de Guadalupe – that shimmers in the sunlight. It’s truly a labor of love. 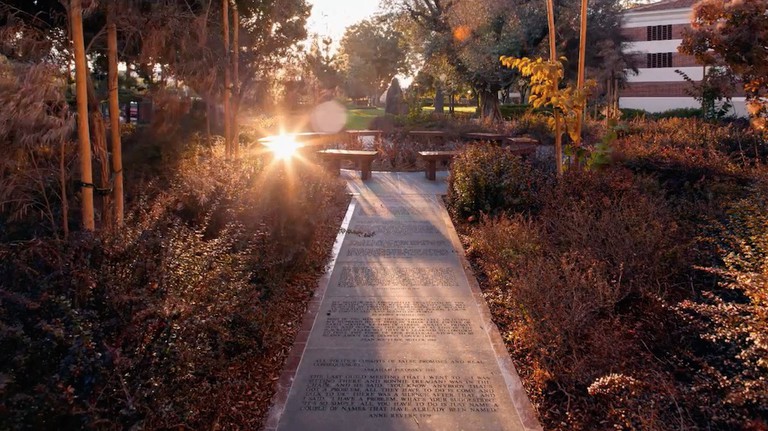 Courtesy of Brigid McCaffrey
Artist Jenny Holzer’s Blacklist is a subtle yet important piece. It comprises 10 benches positioned in a circle. Each stone bench features an engraved quote from a member of the Hollywood Ten. This group refers to the 10 Hollywood filmmakers – including screenwriter Dalton Trumbo and director Edward Dmytryk – who were blacklisted after refusing to cooperate with the House Un-American Activities Committee and its investigation into allegations of communist party members or sympathizers within the entertainment industry in 1947. Find it outside the USC Fisher Museum of Art. 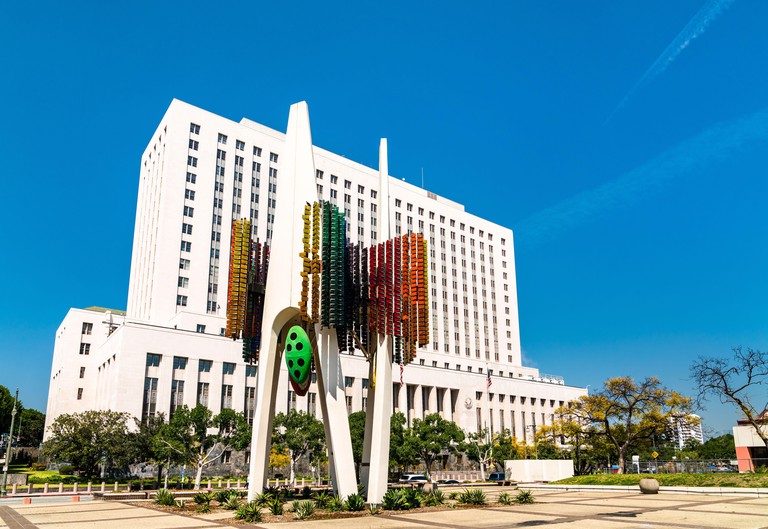 © Leonid Andronov / Alamy Stock Photo
This odd sculpture has been particularly polarizing. Artist Joseph Young presented Triforium to the city in 1975. It stands six stories high in the Los Angeles Mall-Civic Center complex and weighs a staggering 60 tons. It also wasn’t cheap, costing more than $900,000 to build and install the commissioned piece. In its early days, the colored lights would flicker in time to music, making it what Young would boast as a unique “polyphonoptic kinetic tower.” Yet, for all its grand design, people hated it. The sculpture fell into disrepair and was deemed too costly to repair, and because of its size, it was too expensive to remove. However, it saw an upgrade in 2016 when a group of residents dedicated to its restoration received a $100,000 MyLA2050 grant from the Goldhirsh Foundation.

The Great Wall of Los Angeles 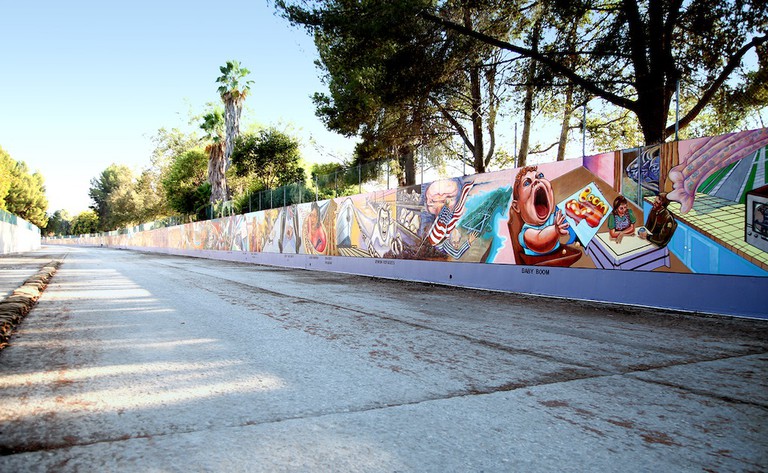 © 1976 SPARCinLA.org
The Great Wall of Los Angeles can be found at the Tujunga Wash, a flood control channel in North Hollywood. In the 1970s, Judith Baca, founder of the Social and Public Art Resource Center (SPARC), came up with the idea to paint a mural detailing California’s history as seen through the contributions and perspectives of local ethnic groups. Over five years and with the help of numerous experts, artists and more than 400 local youth and their families, the mural took shape. Even though it already spans about a half-mile (1km), it’s considered a work in progress. 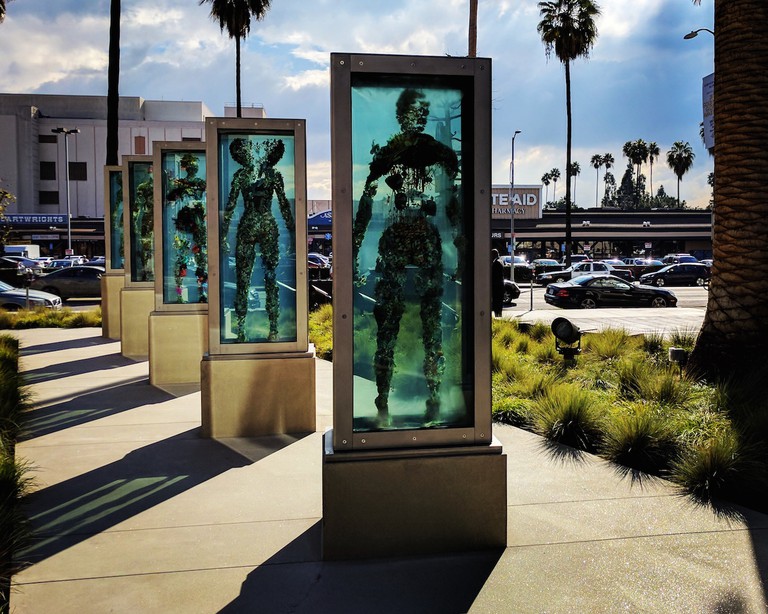 © Juliet Bennett Rylah
Dustin Yellin’s Psychogeographies are glass plates pressed together, and inside, they hold a collage in the shape of a person. The collages are made from a variety of materials, including paper scraps and refuse, layered in a way that creates a 3D effect. You can find a series of these panels on Sunset Boulevard in the courtyard of the NeueHouse Hollywood building.
Give us feedback