The Best Islands To Visit Off the California Coast 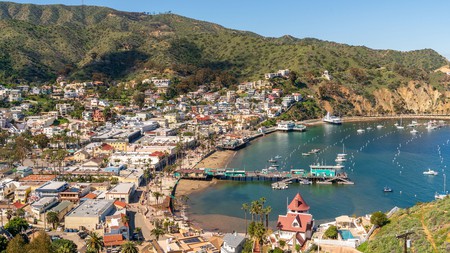 Venture just a few miles off California’s iconic coastline, and there are numerous islands to explore, each offering a unique experience. Including the so-called ‘Galapagos of California’ and a Victorian lighthouse-turned-bed and breakfast, these seven islands – listed from south to north – are all worthy of a visit.

Coronado is actually a tied-island, as it’s connected to San Diego by a thin strip of land known as the Silver Strand. But Coronado still has a distinct charm and resort-island feel – plus, wide beaches with soft sand. While it can be reached by car via the Coronado Bridge, there’s also a ferry that departs from downtown.

Once on the island, it’s hard to miss the red Spanish-style turrets of the Hotel del Coronado. As it was built in 1888, the hotel is full of history and even some alleged ghosts. Visitors can grab lunch or drinks at the hotel and explore the grounds. Beyond a visit to the iconic hotel, a day in Coronado is best spent on the beach, bike riding through town or browsing the shops and galleries on Orange Street.

For more ideas, see our post on 10 Things To Do on Coronado.

From the moment visitors arrive at Catalina’s city of Avalon, they are greeted by white sandy beaches, colorful houses built into the hillside and boats floating in clear blue waters. Located 22 miles (35 kilometers) off the Southern California coast, it’s about a one-hour ferry ride, with departures from Long Beach, San Pedro and Dana Point. Of course, there’s also the option to splurge and arrive via helicopter, private boat or private plane.

The island itself is full of outdoor adventures, from kayaking to glass-bottom boat tours. With diverse marine life, Catalina is also ideal for snorkeling and scuba diving. Visitors aren’t allowed to rent cars, but it’s easy to explore Catalina by foot, bike or golf cart.

Avalon is on the resort side of the island, with luxurious hotels, fine dining, a golf course and a historic Art Deco theater. But over 88 percent of Catalina isn’t developed, and the backcountry and other harbors are ideal for camping and hiking off the grid.

For more ideas on what to do, check out the Ultimate Guide to Catalina Island.

Often referred to as ‘California’s Galapagos,’ the Channel Islands National Park is known for its biodiversity and rugged landscape. The national park comprises five islands: Santa Cruz, Anacapa, Santa Rosa, Santa Barbara and San Miguel. Though all are worth a visit, Santa Cruz and Anacapa tend to be the most popular as they’re the closest to the mainland.

The best way to explore the park, which is replete with sea caves, kelp forests and stunning vistas, is by snorkeling, kayaking or hiking. Though the closest island is only 11mi (18km) off the coast of California, there is no electricity, transportation or food shops available to visitors, adding to the remote feel.

Boats to the islands depart from Ventura and Santa Barbara, and it can take between one and three hours to get there depending on which island you’re visiting. There is also the option to fly. For those who want to stay overnight, there are campsites on all five islands.

Read more tips on visiting the islands in the Complete Guide to Channels Island National Park.

It might not have the natural beauty of some of the other islands, but the notorious Alcatraz is worth a visit for the history alone. Also known as ‘The Rock,’ Alcatraz served as a federal penitentiary from 1934 to 1963, housing infamous prisoners like Al Capone. Visits to the island include an audio tour, complete with recorded commentary from some of the former inmates. On clear days, Alcatraz provides views of both the city and the Golden Gate Bridge.

Though Alcatraz is only 1.5mi (2.4km) off the coast of San Francisco, the waters are known for being frigid and treacherous. Ferries take visitors from Fisherman’s Wharf to Alcatraz. It’s best to book tours early as they often sell out weeks in advance. For the brave, there are also select dates where guests can pay to sleep overnight in a cell.

Part of a pair of islands known collectively as ‘The Brothers,’ East Brother Island is home to a Victorian lighthouse that doubles as a bed and breakfast (and dinner). The lighthouse was first built in 1873 to aid ships passing through the foggy waters of the San Francisco and San Pablo Bays. Built back when lighthouses required someone to maintain them, it included lodging for the lighthouse keeper. Instead of tearing it down, the lodging was preserved and turned into an inn in 1979.

Open to visitors Thursday–Friday, the lighthouse sleeps just 10 people, offering a secluded experience – although it’s only a 30-minute boat ride away from downtown San Francisco. Day visits are available on select Saturdays during the summer for those who want to see the historic lighthouse without spending the night.

The largest natural island in San Francisco Bay, Angel Island offers a fascinating mix of history and outdoor activities. It’s often referred to as the ‘Ellis Island of the West,’ though Angel Island has a much less welcoming history. During the early 1900s, thousands of immigrants were processed and detained at the island’s Immigration Station. Today, the Immigration Station is a museum that details its storied history.

After visiting the museum, there are also multiple trails for hiking and biking around Angel Island. Those who hike to the top of Mount Livermore – the island’s highest point – will be rewarded with 360-degree views of the bay. Angel Island is accessible via private boat or via a public ferry that departs from San Francisco and Tiburon. While there is no hotel on the island, there are campsites that can be reserved. The only restaurant is the Angel Island Cafe & Cantina.

Situated in Humboldt Bay off the coast of Eureka, Woodley Island is accessible via bridge or boat. It has a large marina for both commercial and recreational boats. During the open fishing season, visitors can purchase fresh crab and fish from the vessels coming in.

A significant portion of the island is also a protected habitat, making it a favorite among birdwatchers who come to see the godwits, pelicans, egrets and other birds that frequent the area. Humboats is the only dockside rental place, offering kayaks, canoes and stand-up paddleboards. They also have several nature kayaking tours, including a whale-watching option and an eco-tour that explores parts of the Humboldt Bay National Wildlife Refuge.