The Best Hotels With Suites to Book in San Francisco 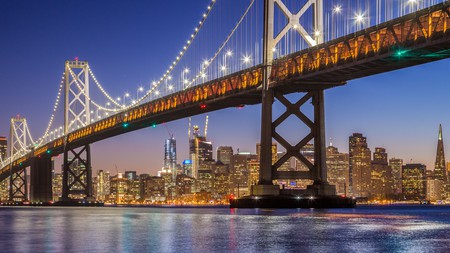 Cool, cosmopolitan, unconventional – San Francisco is a must on any West Coast road trip. A small city that packs quite a punch, it’s played a pivotal role in American culture, from the Gold Rush through the Summer of Love to its current incarnation as a tech mecca. It’s a looker, too – an appealing jumble of hills, cable cars, historic homes, pristine beaches and world-famous landmarks such as the Golden Gate Bridge and Alcatraz. It’s a place where you won’t want to rush – so splurge on one of the best hotels with suites in San Francisco, California, bookable with Culture Trip. 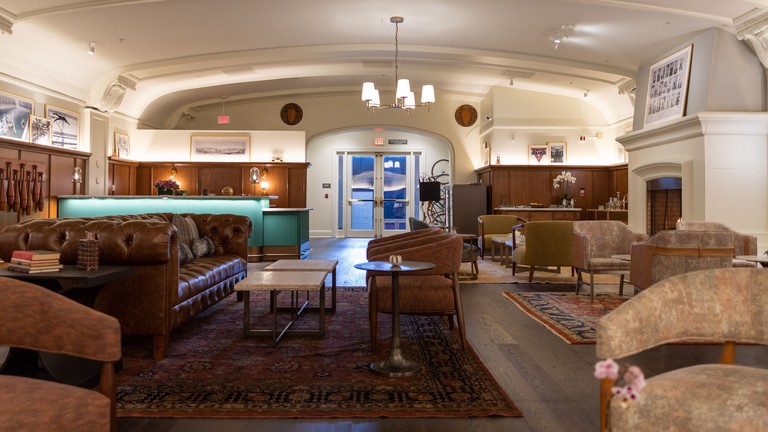 Enjoy a morning coffee and warm donuts while gazing out at the Bay Bridge; the penthouse suite of this eight-story red brick building on the waterfront Embarcadero offers some of the best views in town. Stylish interiors – think leather club chairs and industrial-style lamps – are complemented by thoughtful details including Soundfreaq alarm radios and luxurious Frette bed linens, while perks such as guest bikes, complimentary yoga mats and those fresh donuts are the icing on the cake. 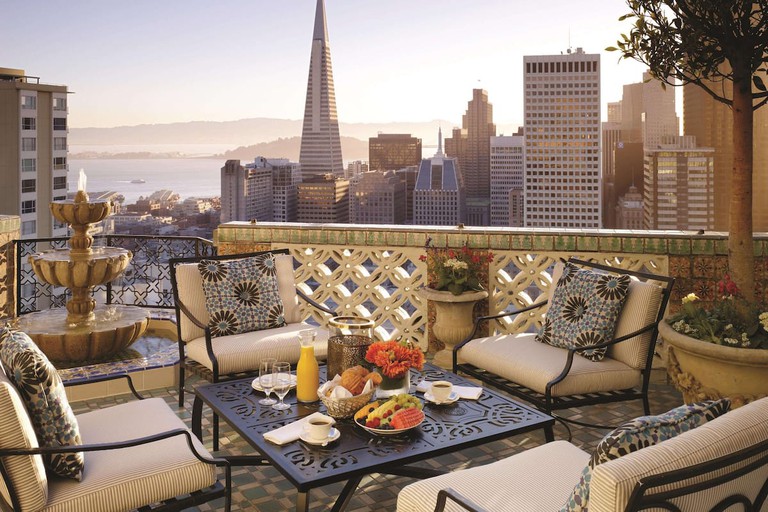 Courtesy of Fairmont San Francisco / Expedia.com
Every city has its iconic hotels, and the Fairmont is San Francisco’s. A turn-of-the-century building perched on top of chi-chi Nob Hill, it’s been a favorite haunt of film stars and royalty for decades. Follow in their well-heeled footsteps by booking one of the hotel’s dazzling suites, complete with marble bathrooms and telescopes to peer at Alcatraz and Coit Tower. For a true once-in-a-lifetime experience, splash out on the palatial penthouse suite, and slink between a billiards room, library and Mediterranean-style terrace. 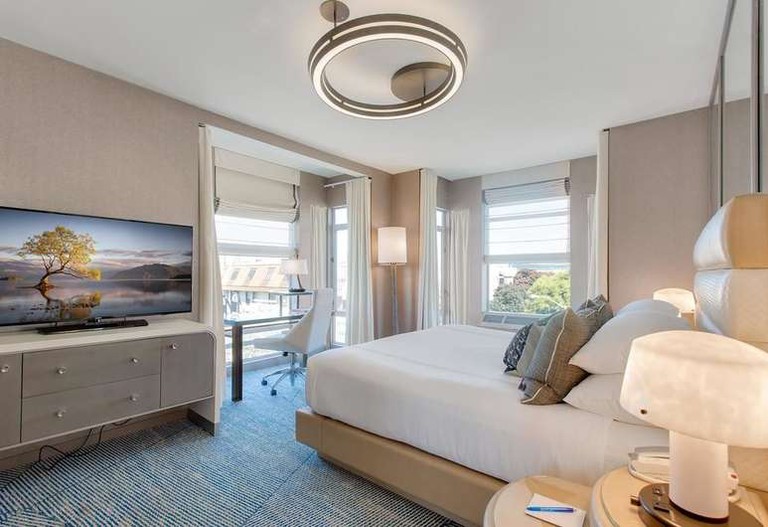 Courtesy of Hotel Zoe Fisherman’s Wharf / Expedia
Grab a bowl of clam chowder and wave hello to the sea lions – this contemporary hotel, located in iconic Fisherman’s Wharf, puts guests at the center of the action. Choose from 221 rooms fittingly decorated in a crisp, nautical style or go for broke and book one of the suites, which offer views over the city, a working fireplace, spa-style toiletries and twice-daily housekeeping. Head out for dinner in boho North Beach before returning to a nightcap around the fire pits on the hotel’s cozy terrace. 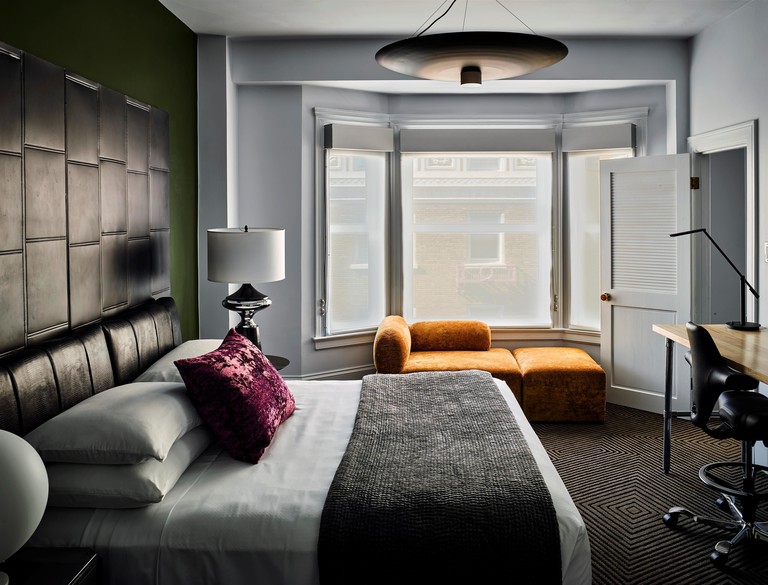 Courtesy of Hotel Zeppelin San Francisco, a Viceroy Urban Retreat / Expedia
Play it cool if you happen to bump into an off-duty rock star at this hip Union Square hangout, where rooms boast individual turntables and even the bathrooms are psychedelic. Channeling the city’s counter-cultural heritage, there are happenings aplenty – holy high tea, anyone? – and bold artwork splashed across every wall. Sumptuous suites come with chaise lounges and an array of books to expand the mind, while king-size beds and blackout shades ensure restorative sleep. Groovy.

Hotel Spero, for a Spanish ambience 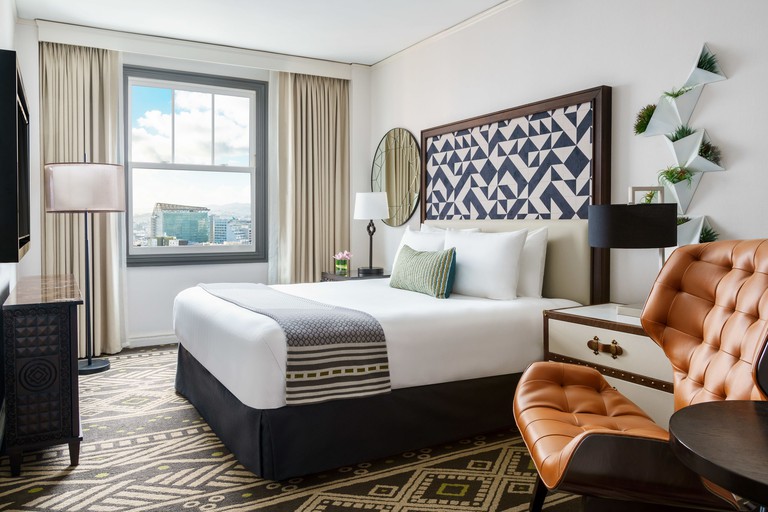 Courtesy of Hotel Spero / Expedia
A fixture of downtown city hospitality since the 1920s, this Spanish Colonial-style hotel is a feast for the eyes, from its hand-painted ceiling beams down to its original marble floors. Rooms feature Spanish tiled floors, ambient lighting and spa-style bathrooms, while its collection of suites range from bold, urban designs with workspaces to airy, sun-filled Serenity Suites. The hotel’s not just a pretty face either, with a sustainability pledge that runs from the complimentary toiletries through to water-saving showers.

Hotel Kabuki, part of JdV by Hyatt, for a Zen abode 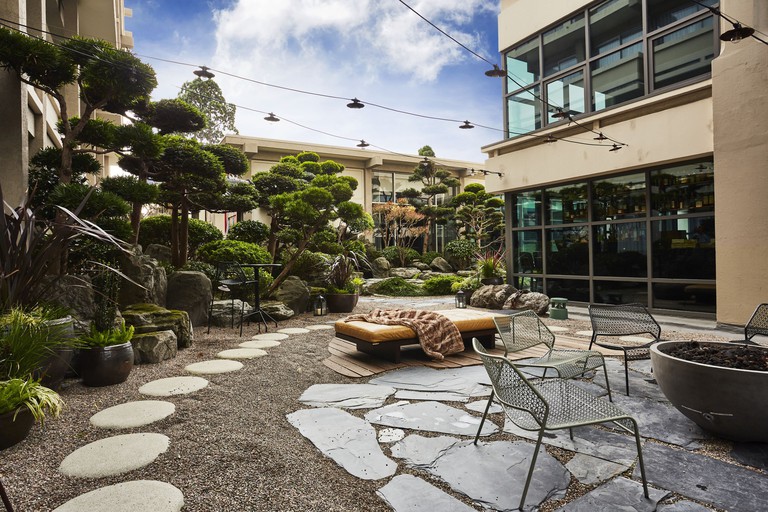 Courtesy of Hotel Kabuki / Expedia.com
Japantown has been home to San Francisco’s Japanese community since the early 1900s, and this boutique hotel on Post Street celebrates its rich history. Step into the lofted-beam lobby and you’ll find vintage Japanese graphic design prints, an open-air meditation garden and a bar where you can try some of Japan’s renowned whiskeys. Book dinner in its acclaimed restaurant, Nari, or head out to a gig at rock ‘n’ roll mecca the Fillmore before heading back to a suite kitted out with rain showers, plush beds and designer toiletries.

Hotel Nikko, for a Japanese-inspired stay 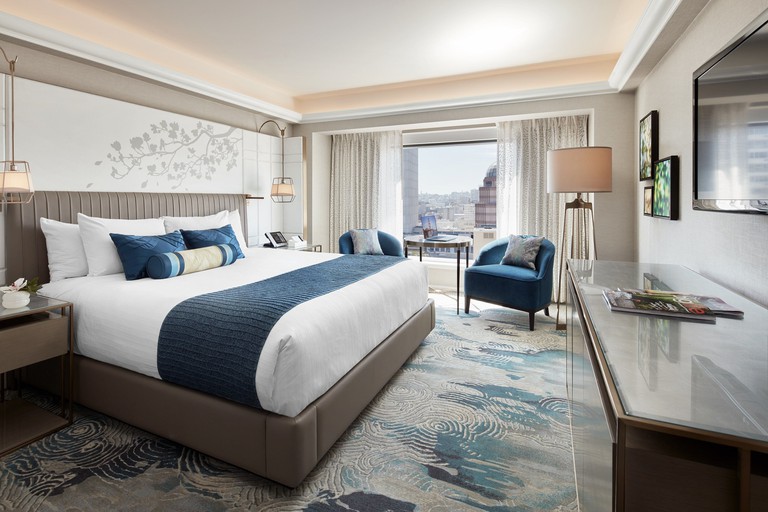 Courtesy of Hotel Nikko San Francisco / Expedia
This huge Japanese-style hotel has enough going on within its walls to ensure you’ll never be bored, from saunas, steam rooms and its own hair salon to Broadway-inspired nightclub Feinstein’s at the Nikko. Located a couple of blocks from busy Union Square, and offering great transport links to the airport and other parts of the city, rooms offer a tranquil retreat from the metropolitan buzz, while the roomy suites up on the 20th and 21st floors boast marble tubs, pillowtop beds and, of course, spectacular views. 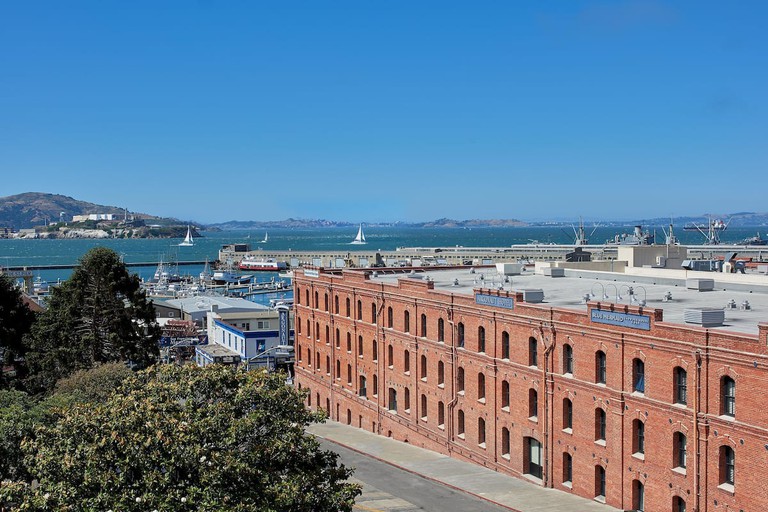 Courtesy of Argonaut Hotel / Expedia
If you’re in need of a breath of fresh air, make a beeline for this breezy waterfront hotel in Fisherman’s Wharf’s historic Haslett Warehouse building. With boat rides on your doorstep, fresh seafood on the menu and sunny rooms overlooking the Bay, it’s an ideal spot for some R&R. Suites featuring jacuzzi baths and in-room spa services are decked out with porthole-style mirrors, wooden shutters and clapboard headboards, lending an appropriately nautical feel to interiors. 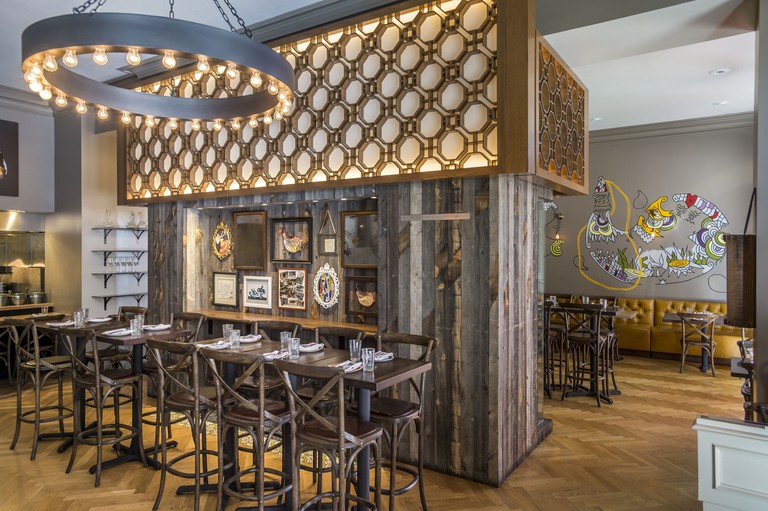 Courtesy of Warwick San Francisco/ Expedia
Cool, classy and timeless, this historic Beaux Arts-style hotel offers more than 70 rooms and suites in an enviable location just steps from Union Square and Nob Hill. Built in 1913, the building’s heritage is reflected in repurposed antique and mirrored headboards, while a soft color palette and opulent fabrics add to the luxe feel. Suites are similarly decadent, with soaring 25ft (8m) ceilings, four-poster beds, fireplaces and balconies. Cap off an evening spent in the nearby Theater District with a glass of wine or a cocktail in the European bar.
Give us feedback