The Best Hotels to Book Near Garden Grove, California 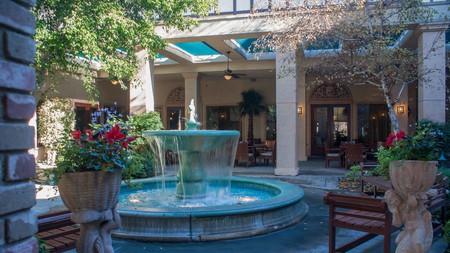 If you’re a kid, Orange County is one of the most magical places on Earth. Not only is it home to Disneyland – officially the Happiest Place on Earth – but you also have the Knott’s Berry Farm theme park and Southern California’s best beaches to run riot on. For parents, taking the kids to OC theme parks is just the start of the perfect family holiday. Whether it’s waterslides, magicians or turtle fountains, hotels in Garden Grove, Anaheim and Cypress join in the fun – these are the best, now bookable via Culture Trip.

Disneyland Hotel, for instant access to the Happiest Place on Earth 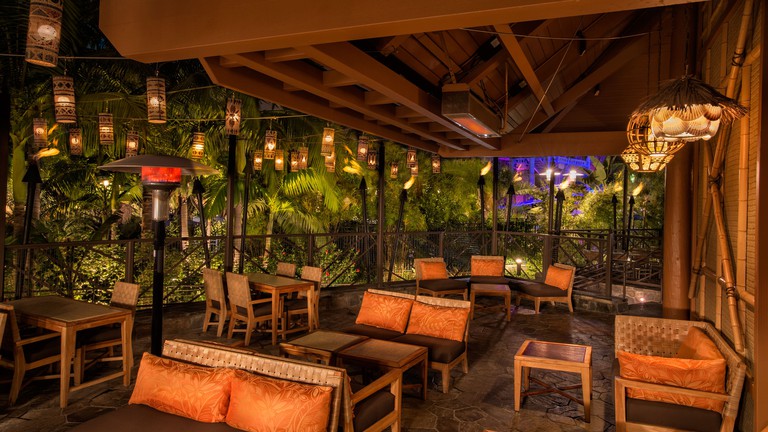 Courtesy of Disneyland Hotel / Expedia
Providing the lodgings for the Happiest Place on Earth? You’d better sprinkle magic dust over everything. The Disneyland Hotel – a short stroll from both Disneyland Park and Disney California Adventure Park – does exactly that, with light-up Sleeping Beauty Castle headboards, themed restaurants and bars (try Goofy’s Kitchen or a Jungle Cruise watering hole) and water slides in the shape of monorail trains. 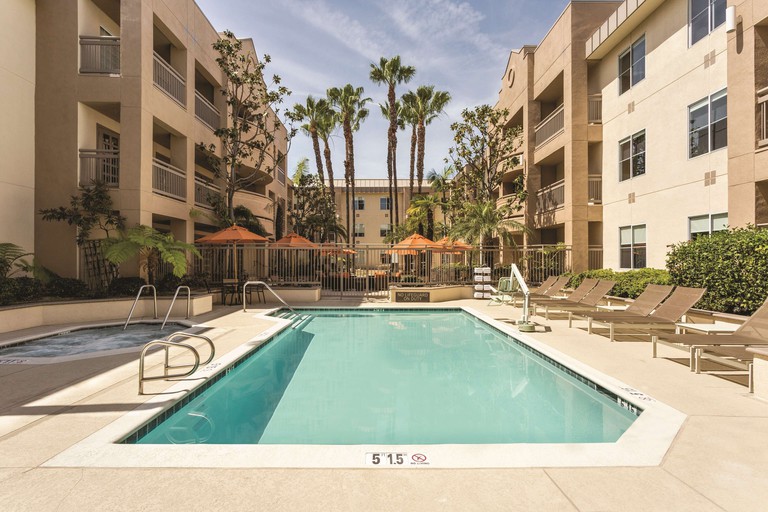 Courtesy of Hyatt House Cypress/Anaheim / Expedia
Situated near the Disneyland Resort, Medieval Times Dinner & Tournament and Knott’s Berry Farm, Hyatt House couldn’t be better placed for a family adventure if it were built in Anaheim by parents themselves. Some of the best beaches in Southern California, including Huntington Beach and Seal Beach, are also close by. Plus, the residential-style suites come with complimentary grocery shopping, so you don’t have to take a break from the fun. 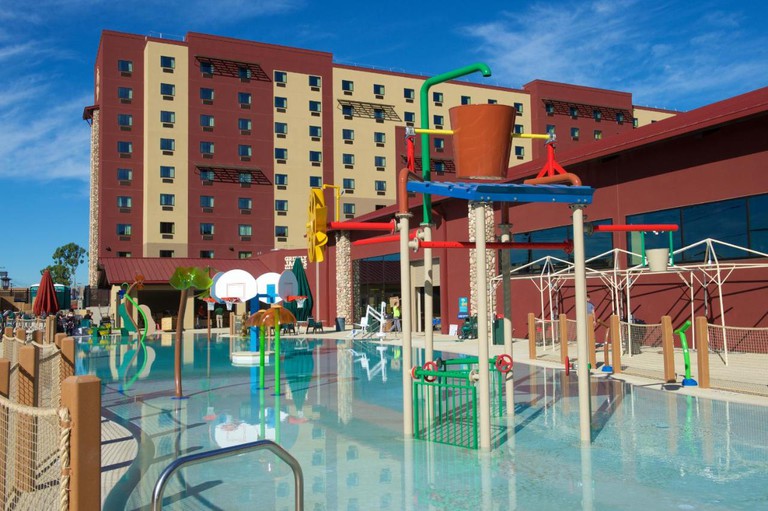 Courtesy of Great Wolf Lodge Anaheim / Booking.com
We’re just gonna say it – you’ll be howling with laughter at the Great Wolf Lodge indoor water park in Anaheim. Experiences here range from the sedate to the scary: take a relaxed tube ride on the Crooked Creek lazy river, before braving the aptly named Howlin’ Tornado, which hurls four-person rafts down a six-story drop. To keep the merriment going once you’ve dried off, opt for one of the themed suites that mimic a cozy cave or a log cabin.

Ayres Hotel Seal Beach, for nearby sand and surf 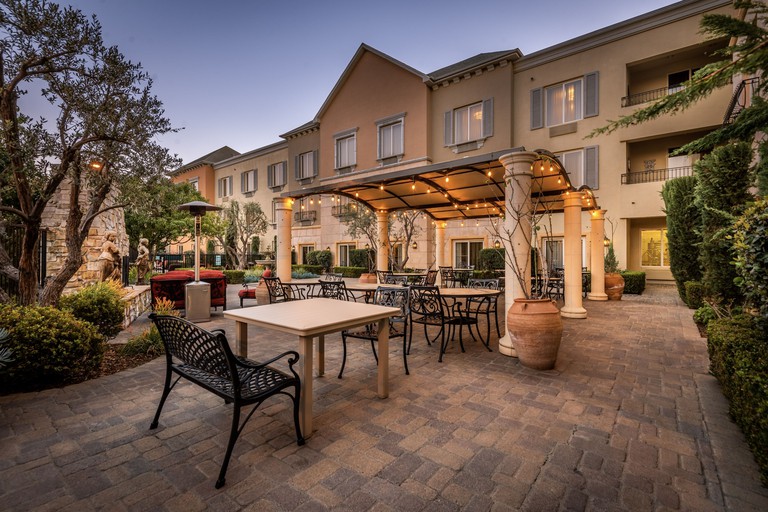 Courtesy of Hyatt House Cypress/Anaheim / Expedia
With 112 newly decorated deluxe guest rooms, the Ayres Hotel offers a stylish perch 4mi (7km) away from the waves at Seal Beach. Whatever the weather, you’ll fall in love with the communal areas here. Dip into a sparkling heated outdoor pool and hot tub or soak up the sun in the beautiful courtyard with its gurgling fountains. In the evening, sit around the outdoor fireplace for warmth and good company. 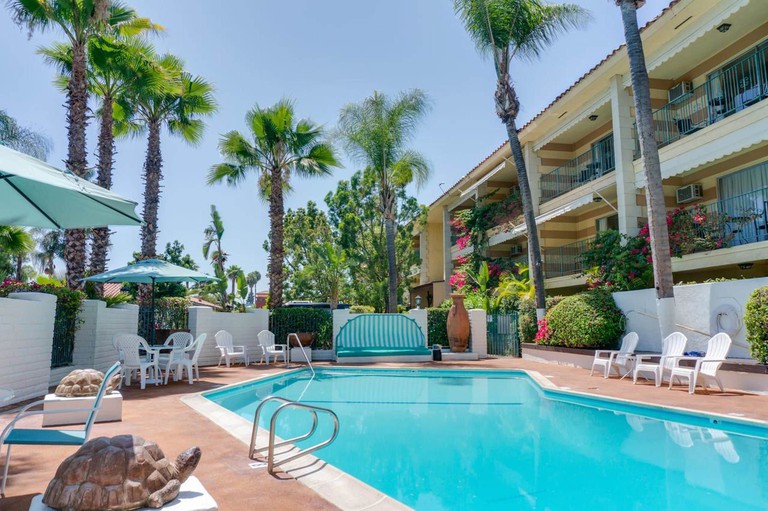 Courtesy of Hotel Pepper Tree Boutique Kitchen Studios / Expedia
Whether it’s the inflatable red peppers floating in the swimming pool or the colorful Spanish-inspired courtyard, the Hotel Pepper Tree will brighten up your day. Like your food cooked your way? Prepare family meals in your own kitchen or head outside to the barbecue area for some al fresco dining. The kids will be drawn to the heated pool that, charmingly, is guarded by a number of turtle fountains spraying water from their mouths. 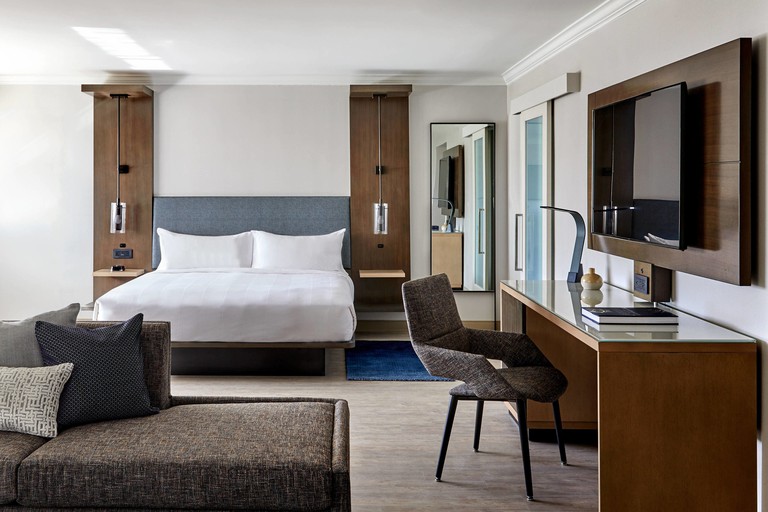 Courtesy of Anaheim Marriott / Expedia
Angels Stadium, the Honda Center and City National Grove are all nearby this four-star hotel, making it a great base for seeing a game or catching a show. Disneyland also looms large here. To sweeten the deal, check out the Good Neighbor Program, which means that kids aged 12 and under eat breakfast for free when their parents order an entrée at the hotel’s signature restaurant, nFuse Kitchen, as part of a vacation package. 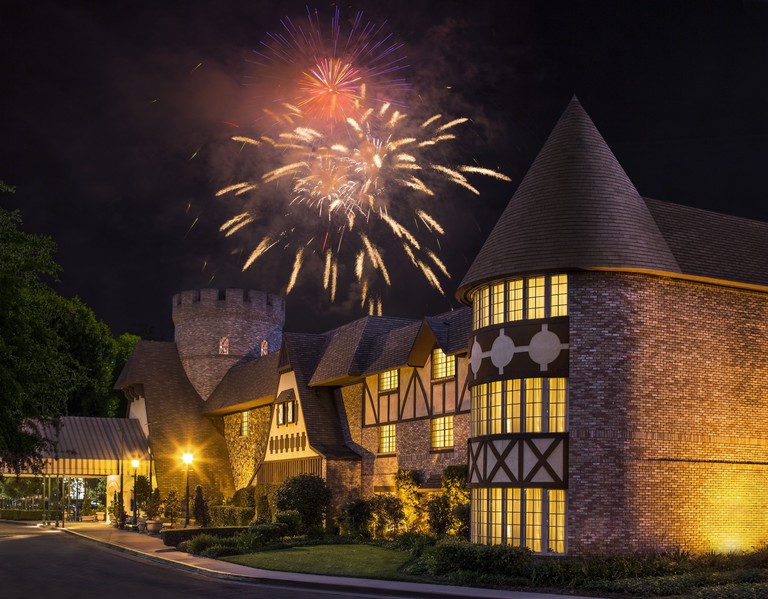 Courtesy of Anaheim Majestic Garden Hotel / Expedia
A hotel that looks like a fairytale castle? Other hotels may call themselves “magical”, but the Majestic goes a step further. Once you’ve grabbed a beverage at the Garden Court Lounge, head upstairs to the showroom for 75 minutes of hocus pocus by one of the world’s premier close-up magicians, David Minkin. If you need even more entertainment, jump aboard the Dream Machine Shuttle to Disneyland Park and Disney California Adventure Park. 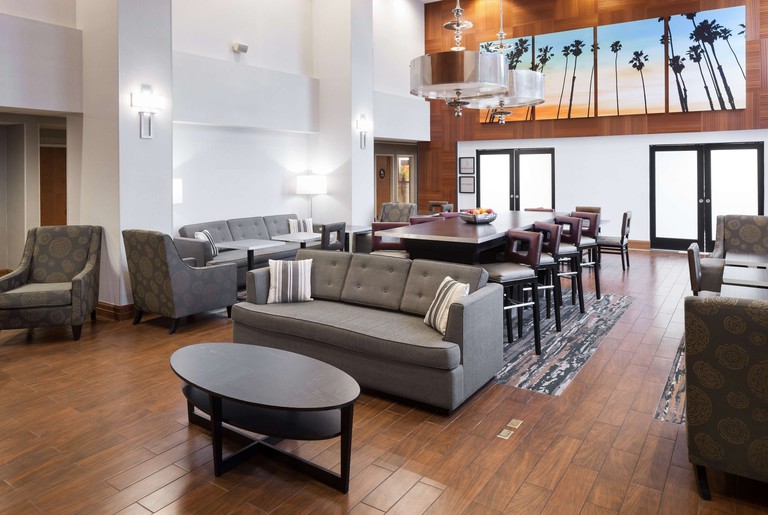 Courtesy of Hampton Inn Los Angeles/Orange County/Cypress / Expedia
For a quick stopover in Orange County, the Hampton Inn has you covered. It’s just a short drive from the Long Beach and John Wayne/Orange County Airports, meaning you are unpacked and ready to go in a heartbeat. And there’s a lot of exploring to do – the best Cypress shops and restaurants, the Disneyland Resort, Knott’s Berry Farm, the Aquarium of the Pacific in Long Beach and Southern California’s beautiful beaches are all on your doorstep.

Desert Palms Hotel and Suites, for space to spread out 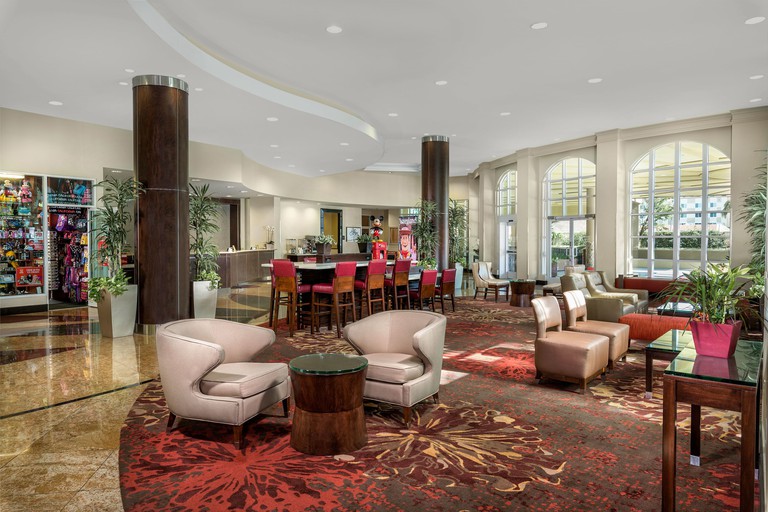 Courtesy of Desert Palms Hotel and Suites / Expedia
Less than a block from Disneyland, the spacious guest rooms at the Desert Palms Hotel and Suites will ensure the whole family gets a good night’s rest before tackling Mickey Mouse’s home. The on-site attractions aren’t to be sniffed at, either. Take a load off beneath shade awnings next to a heated outdoor pool, soothe some aching muscles in the hot tub and get ready for the day at the hot breakfast buffet.
Give us feedback