The Best Hotels to Book in Santa Ana, California 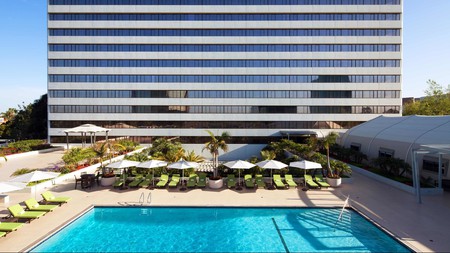 You may never want to leave the relaxing pool area at this Westin | Courtesy of The Westin South Coast Plaza, Costa Mesa / Expedia

Although you’ve likely heard of the infamous Santa Ana winds, this Southern California city is often overlooked for its more well-known neighbors of Anaheim and Newport Beach. But don’t sleep on this multicultural city; it has a rich history, hosts a diverse food, arts and culture scene, is highly walkable and makes a great hub for venturing into other Orange County towns. Here’s our pick of the best hotels in Santa Ana, California – bookable on Culture Trip.

Avenue of the Arts Costa Mesa, a Tribute Portfolio Hotel, for les artistes 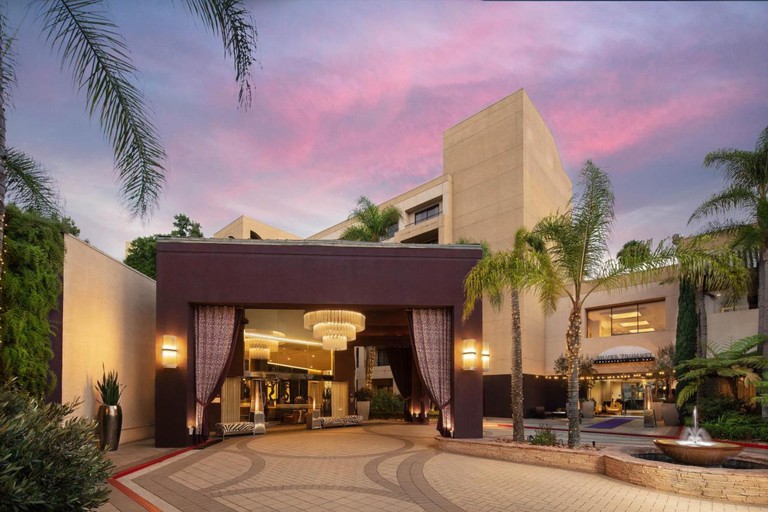 Courtesy of Avenue of the Arts Costa Mesa, a Tribute Portfolio Hotel / Booking.com

Santa Ana is aflame with an ever-evolving artistic community, so stoke your creative fire with a stay at Avenue of the Arts Costa Mesa. Just a 15-minute drive from Downtown Santa Ana – which hosts an art walk on the first Saturday of each month – this Tribute Portfolio Hotel features eclectic design, evident in the curving and swirling patterns throughout the entire property. From the fuchsia velvet sofas in the lobby to the newspaper-print accent walls in the hardwood-floored guest rooms and violet pillows by the outdoor pool, this place is picture-perfect. 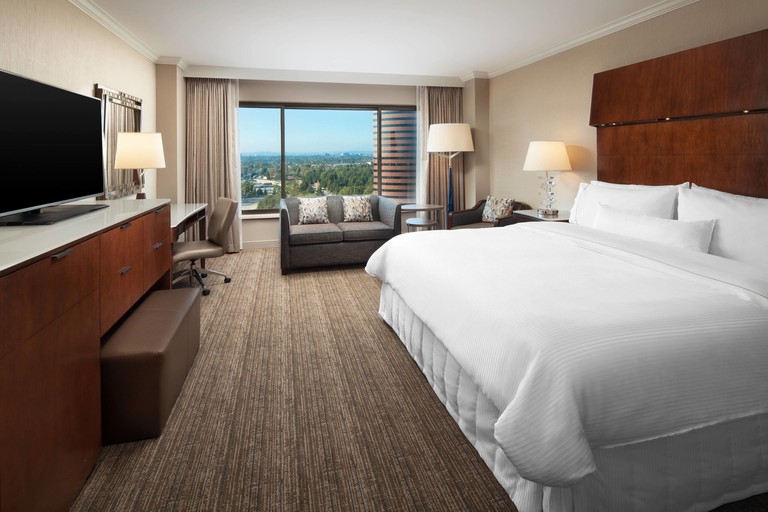 Fashionistas from around the globe come to South Coast Plaza – the largest shopping center on the US West Coast – to shop until they drop at the nearly 300 retailers. With a stay at this Westin – next to South Coast Plaza and a 15-minute drive from Downtown Santa Ana – you can roll out of bed and into Nordstrom, Sephora and Valentino. Stop for wagyu and wine at Mastro’s Steakhouse across the street before hitting the hay in your airy guest room. 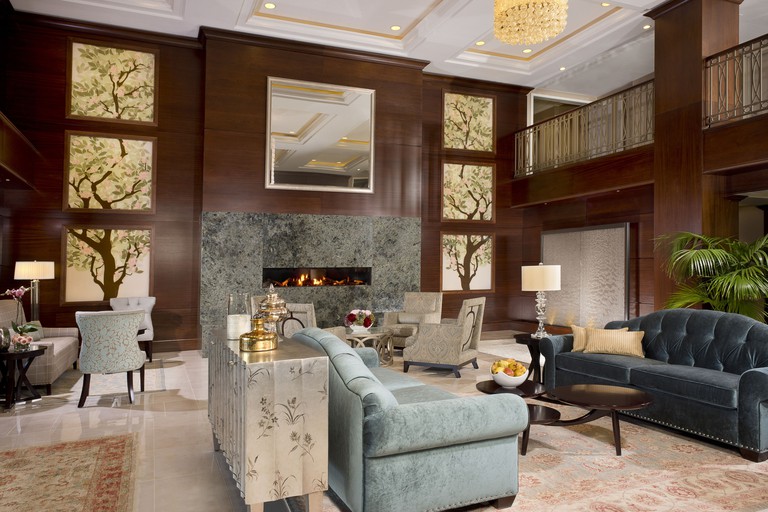 The vibe at the Ayres Hotel Fountain Valley is a Zen tea party – you’re invited to take a cuppa from the comfort of the seafoam-green and celestial-blue velvet sofas in the lobby while watching the flames flicker in the enormous gas fireplace. After a day walking around the Downtown Santa Ana Historic District – a 20-minute drive away – give your tootsies a rest back at the hotel in the outdoor heated pool and spa before resting like an angel in your gold-and-yellow room complete with a triple-sheeted Ayres Celestial Sleeper bed.

Residence Inn Tustin Orange County, for settling in for a cozy night 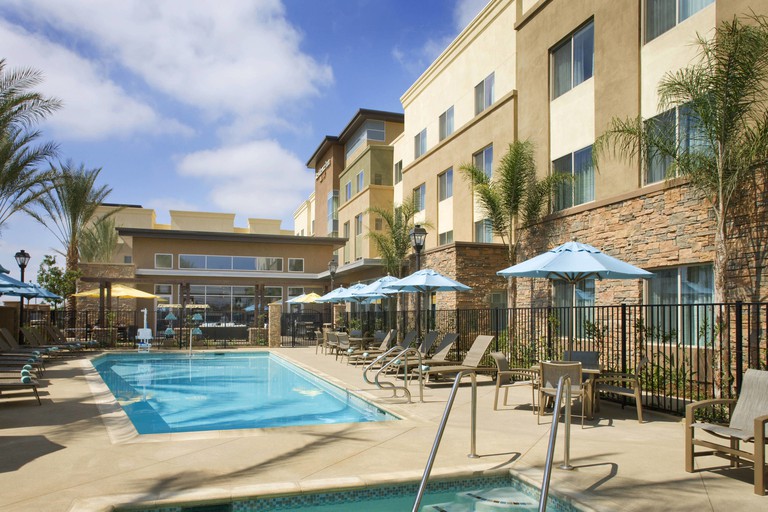 Southern California is sprawling, and you can’t discover all of its secrets on a short trip. So, why not get comfortable? This extended-stay property in Tustin is just 4mi (6km) from Santa Ana and makes a great home base for exploring the diverse city and its surrounding towns. Whip up breakfast in your fully equipped kitchen, and get a sweat session in the gym before venturing to local attractions such as the Santa Ana Zoo, Kidseum and the Discovery Cube Orange County. 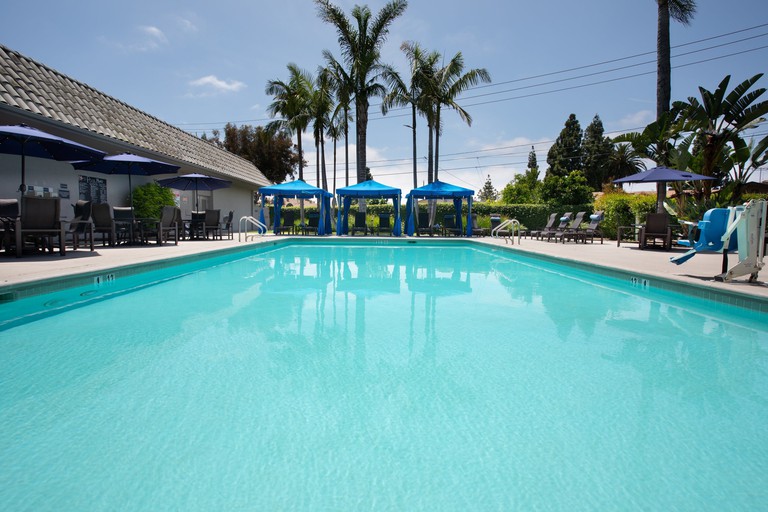 A 15-minute drive from Santa Ana, this contemporary Crowne Plaza lies in a more corporate area of Orange County, meaning quieter nights and upscale dining options. Hipsters will love the short walk to the Camp, an ecofriendly retail center – the Black Widow tart from Blackmarket Bakery is a must – and the LAB Anti-Mall, where you can pick up SoCal souvenirs, such as amulets and succulents, while you chow on a vegan soyrizo burrito. At the hotel, don’t miss sipping signature OC margaritas around the firepit at the Fireside Tavern. 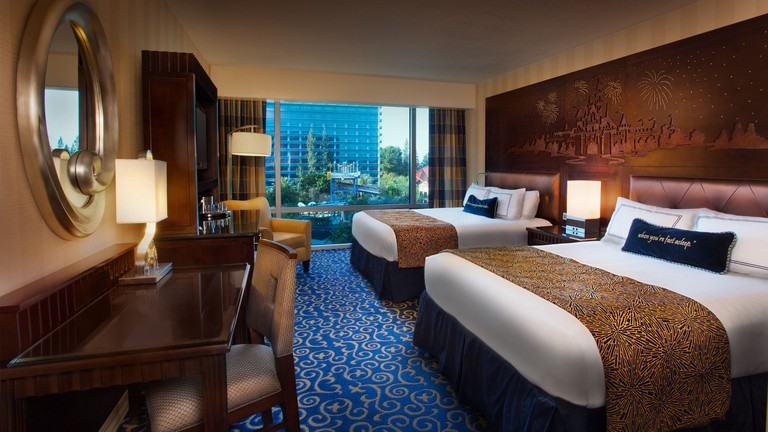 If you want to be on-site at the Happiest Place on Earth, you can’t get much closer than the whimsical Disneyland Hotel. Cheshire-cat-purple velvet armchairs beckon in the Alice in Wonderland-style lobby, and a sparkling waterfall near the Mickey Mouse-shaped outdoor pool lights up at night. After a romp in the parks, enjoy a HippopotoMai-Tai at on-site Trader Sam’s Enchanted Tiki Bar, then head 8mi (13km) to Twisted Tiki at the McFadden Public Market in Santa Ana to keep the party going. 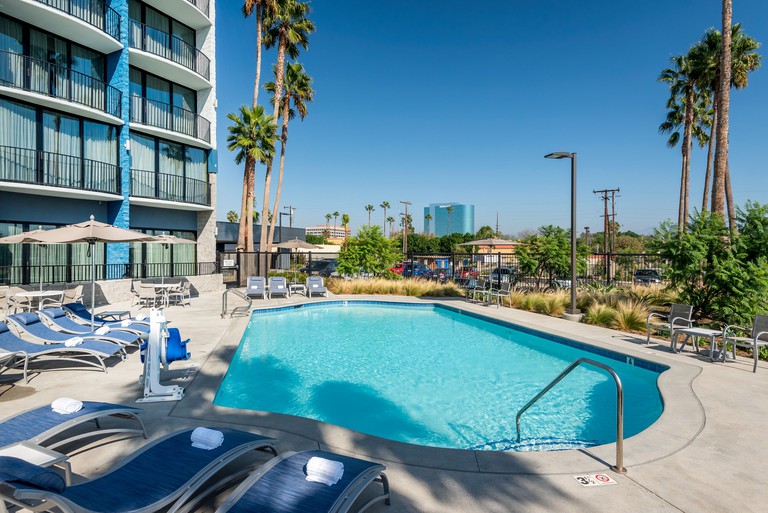 This hotel in Santa Ana is your best bet if you want to get inspired by creatives – the downtown Artists Village is a short drive down the road. Snooze deeply thanks to blackout curtains in sleek rooms bedecked with pops of neon – we love the lemon-lime accent wall – before waking up to free breakfast. Afterward, get a quick nip in the outdoor heated pool before you get in your steps for the day. 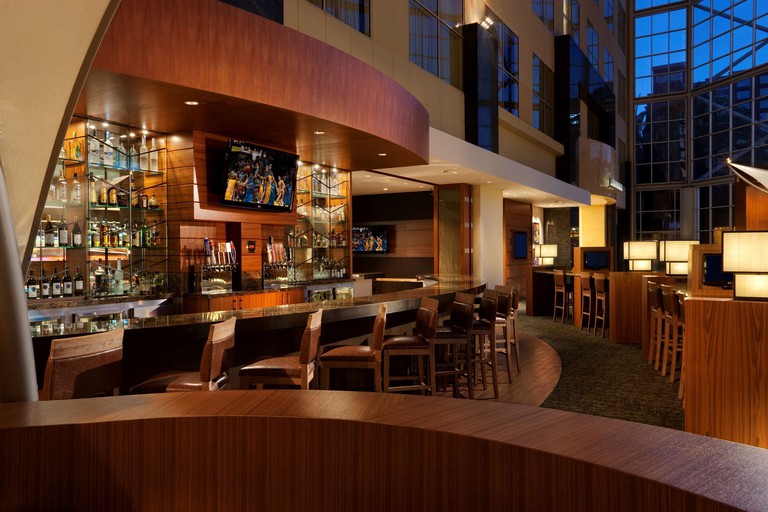 Is that a salty sea breeze from the Pacific Ocean wafting through your window? Although Garden Grove is a bit inland, you wouldn’t know it by the looks of this Hyatt Regency, which styles many of its deluxe rooms and suites with ocean blues and artwork of crashing waves. You’ll find palm trees galore surrounding the hotel and its two outdoor pools and sports deck; they’re even inside the expansive, naturally lit lobby. Also, you’re only 15 minutes from Santa Ana and eight minutes from Disneyland. 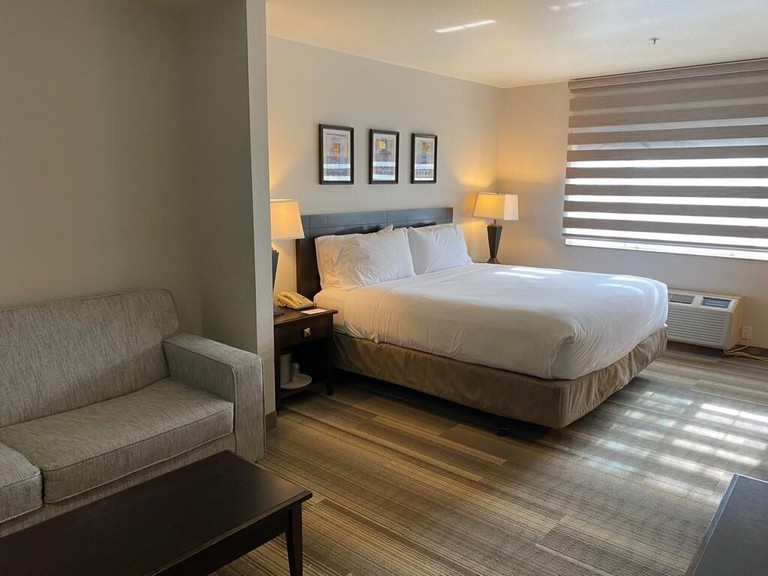 When you’ve had your fill of pan-roasted sakura pork chops and white-cheddar-jalapeño cornbread at the renowned Playground in Santa Ana – a Jonathan Gold favorite – head 12 minutes to Hotel Marguerite and drink in the quiet country-cottage atmosphere. Immerse yourself in the outdoor heated pool and hot tub, or head a block north to Haster Basin Recreational Park for a serene-green walk through the 21-acre (8ha) park before asking the 24-hour reception desk for a late checkout. 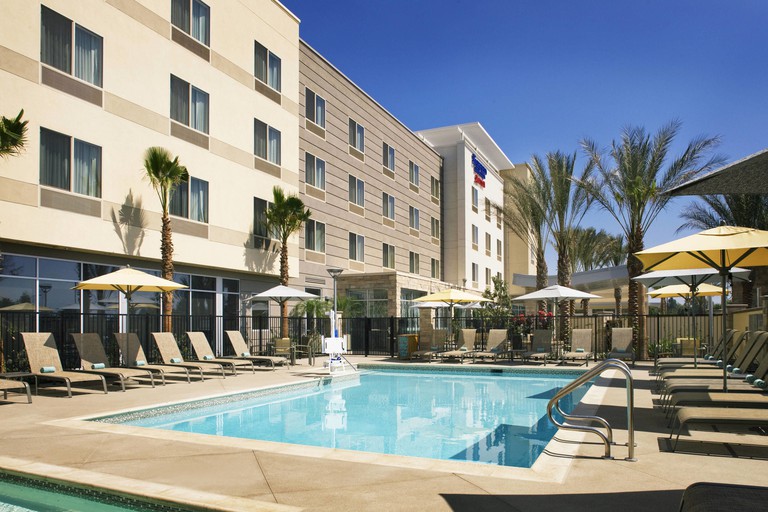 If you can’t keep your eyes off the game, you’ll love the dining area at this Fairfield Inn and Suites in Tustin – about 4mi (6km) from Santa Ana – which is outfitted with two big screens. If you can tear yourself away, though, you won’t regret it as the California sunshine beckons at the outdoor pool or nearby Limestone Canyon Regional Park. Muted jewel tones make rooms feel homey, but if you want vacation-only vibes, treat yourself to all the snacks you can eat from the 24-hour on-site convenience store.

Fancy discovering more places to stay in California? Check out our pick of the best hotels in Orange County, California, for every traveler, bookable on Culture Trip.