The Best Hotels in the Tenderloin, San Francisco 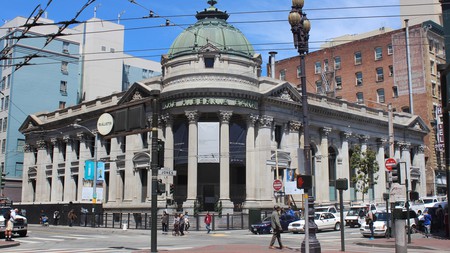 The Tenderloin, a neighborhood in the middle of downtown San Francisco, is studded with hotels that ooze character. If you’re looking for places to stay in this unique part of California, this list rounds up some of the best.

Thought to be named after an old New York City neighborhood famous for its hedonistic pursuits, the Tenderloin has a storied past soundtracked by the beats of its heaving nightlife, smoky jazz clubs and neon-tinged burlesque houses. Though known for having a gritty side, the district has won people over with its evolving art scene and multicultural collection of eateries. So, if you’re looking to try some excellent no-frills fare or follow in the footsteps of rock stars, these hotels should be at the top of your list. 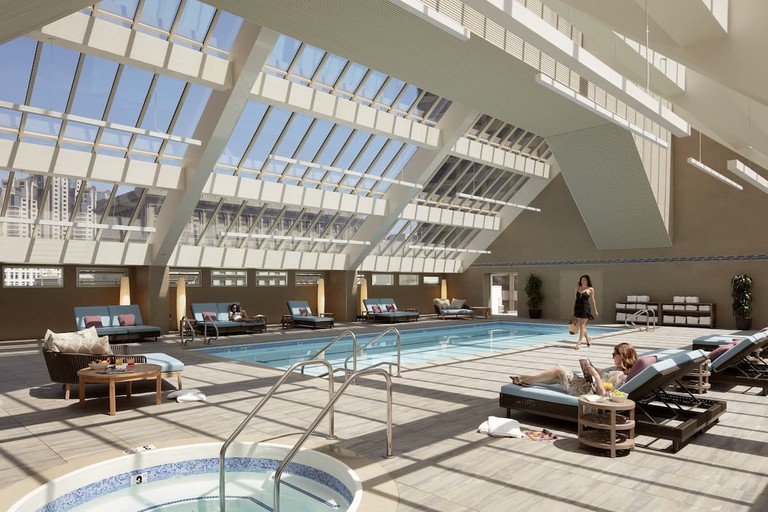 Courtesy of Hotel Nikko / Expedia
View Rooms
The lobby of the Hotel Nikko oozes a glossy elegance with its marble floors and bronze-leafed plum drapes. You can tuck into fresh sushi under gothic chandeliers in Japanese restaurant ANZU, or go for a swim in the atrium-style setting of the pool, which is lined by periwinkle-blue loungers. There’s also an outdoor deck with fire pits where you can order s’mores to toast. Rooms range from the Deluxe, decorated with ocean-blues and golden detailing, to Executive Suites with velvet sofas, sweeping city views and access to the Imperial Club Lounge where you can indulge at one of the evening wine receptions.
EVERYTHING YOU NEED TO KNOW 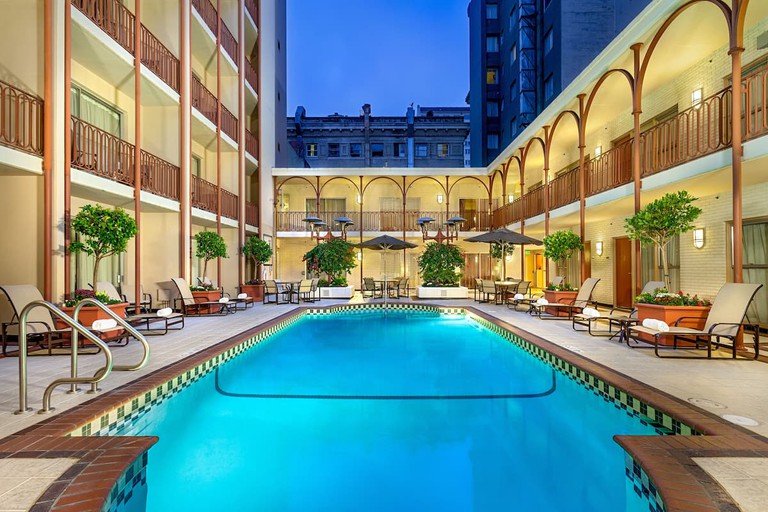 Courtesy of Handlery Union Square Hotel / Expedia
View Rooms
Rubbing shoulders with art galleries and fashion boutiques in Union Square, this 20th-century hotel promises a leisurely stay. A heated pool sits in a SoCal-style courtyard, surrounded by tan-colored loungers and trees in terracotta pots. Take a dip, workout in the fitness center and unwind in the sauna, or tuck into hearty fare like loaded mac and cheese in the hotel’s 1930s-inspired restaurant Daily Grill. Upstairs, Historic Section rooms are dressed in an earthy palette with pillowtop mattresses, while the upgraded Premier Section includes additional perks like a balcony, complimentary Lather toiletries and a lighted vanity mirror.
EVERYTHING YOU NEED TO KNOW 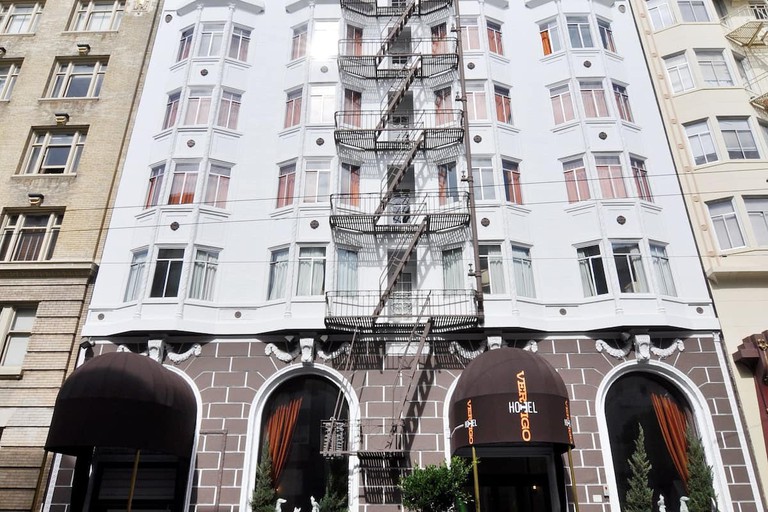 Courtesy of Hotel Vertigo / Expedia
View Rooms
Named after Hitchcock’s classic film noir Vertigo (in which the building had a cameo), this boutique hotel pays tribute with fond homages. As well as the film playing on repeat in the lobby, tangerine-colored detailing alludes to the retro movie poster, and a twisting staircase captures the warped aesthetic of the film. In keeping with the theme, rooms are decorated with swirled artwork, while horse-head-shaped lamps and wingback armchairs add a kooky slant. Wake up to a complimentary morning newspaper and listen to tunes using the iPod docking station, before heading down to grab a pastry from the in-house café.
EVERYTHING YOU NEED TO KNOW 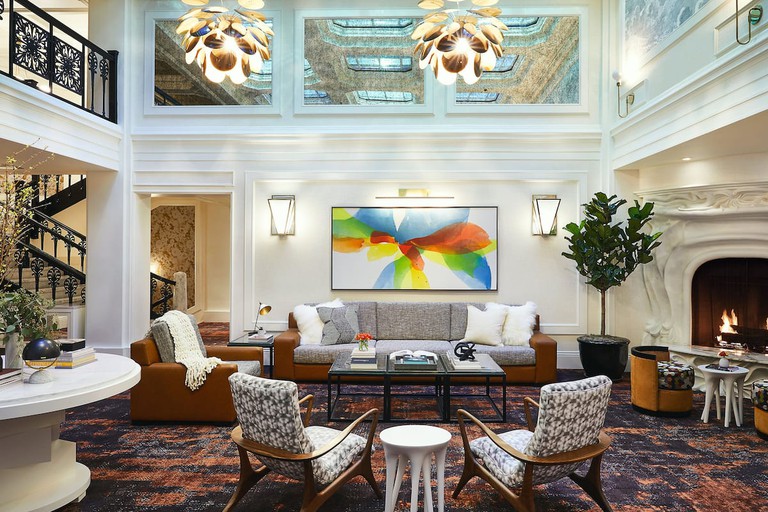 Courtesy of Galleria Park Hotel / Expedia
View Rooms
The Galleria Park Hotel dresses the Art Deco bones of its 20th-century building with contemporary art and stylishly mis-matched furniture. A surprising pocket of quiet can be found on the third floor Park Terrace, set with vine-twisted trellises that shade the benches and a small running track around its edge. If you want to step your workout up a notch, opt for one of the Peloton bikes in the gym. Fresh, neutral colors decorate the rooms, complementing the light spilling through wooden venetian blinds and bouncing off silvery headboards. Each includes an Illy espresso machine and mosaic-tiled bathrooms stocked with Jonathan Adler bath products.
EVERYTHING YOU NEED TO KNOW 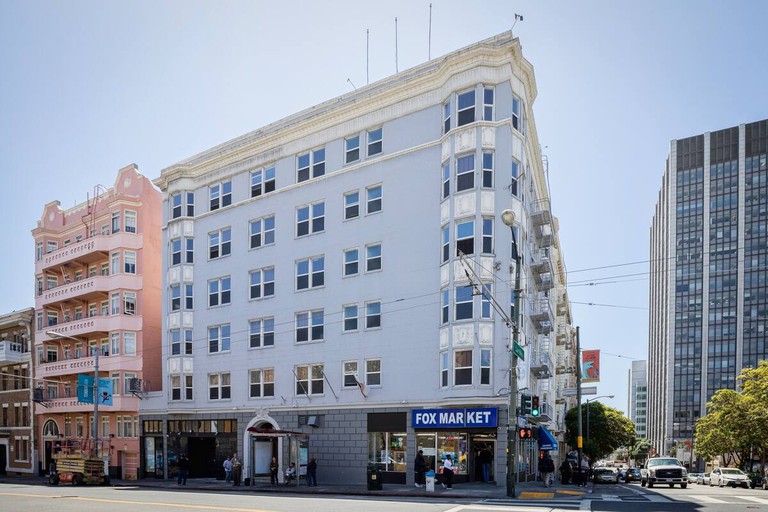 Courtesy of HTL 587 / Expedia
View Rooms
A contemporary cabin-meets-traditional-townhouse, HTL 587 combines wood-paneled floors and Victorian-style fixtures with caramel-leather sofas and golden detailing. An old-timey elevator whisks you up to intimate rooms that are decked out with warm tones and practical touches like a 42-inch TV and working desk, while the sophisticated communal spaces offer a cozy setting to read the complimentary newspaper each morning. The hotel’s location in San Francisco’s Little Saigon district means that you can pick up an authentic bánh mì gà (roast chicken) or cha lua (pork paté) at the on-site restaurant Saigon Sandwich before heading off for some retail therapy in Union Square, just 15 minutes away.
EVERYTHING YOU NEED TO KNOW 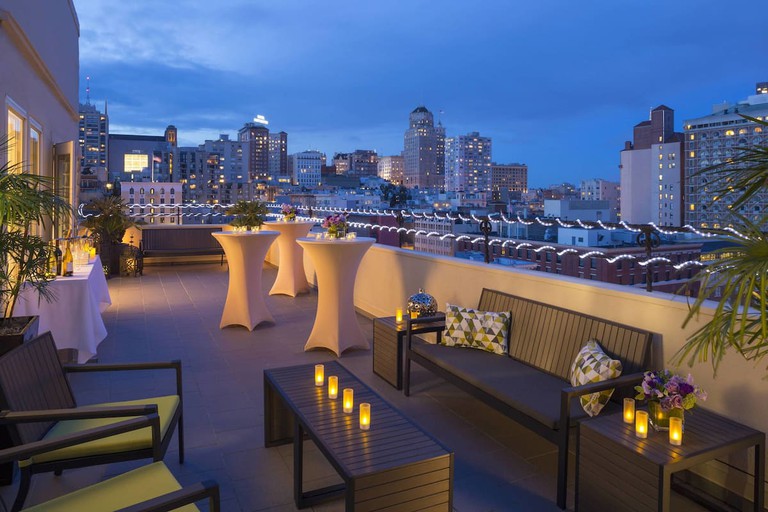 Courtesy of Hotel Adagio / Expedia
View Rooms
Housed in a dusky-blue Spanish Colonial Revival building that merges into a soaring high-rise, the Adagio’s ornate swirling facade, arched ground-floor windows and cloud-brushing height make a striking first impression. Inside, Mad Men-reminiscent rooms pair rich wooden furnishings and bold patterned carpet for a distinguished feel, while the giant windows offer sweeping city views. Catch a game over a locally brewed beer in the old-worldy Mortimer Bar, theatrically lit and decorated with top hats, or feast on farm-to-table fare among the lilies and lime hues of the Green Room.
EVERYTHING YOU NEED TO KNOW 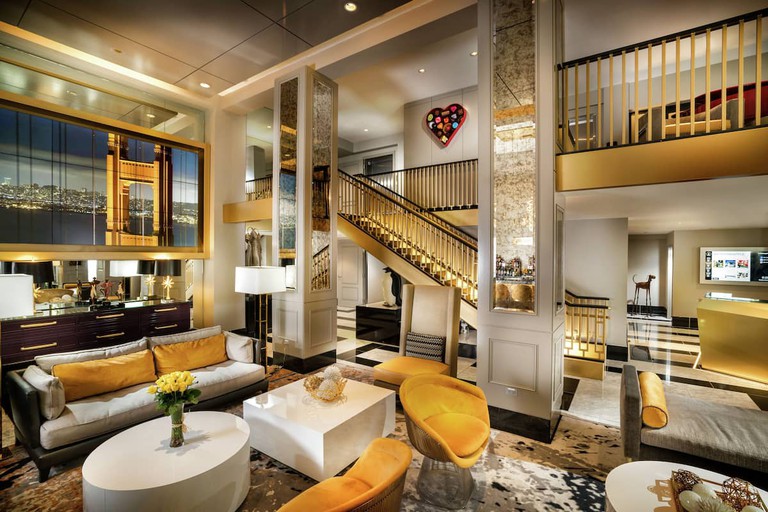 Courtesy of Staypineapple San Francisco / Expedia.com
View Rooms
Adorned with a crown-like top and golden crests, Staypineapple San Francisco takes the glamour of its fairytale-like facade and runs with it. The lobby glistens with its gilded staircase and antiqued mirrors, and you’ll pass whimsical sculptures of ruffle dresses and heart-shaped chocolate boxes on your way to the rooms. They range from a Persona Queen to a Celebrity King, and the beds are the real highlight here, enveloping you in cloud-like mattresses and feather pillows (though the Carrara marble walk-in showers and signature fluffy robes come in at a close second).
EVERYTHING YOU NEED TO KNOW 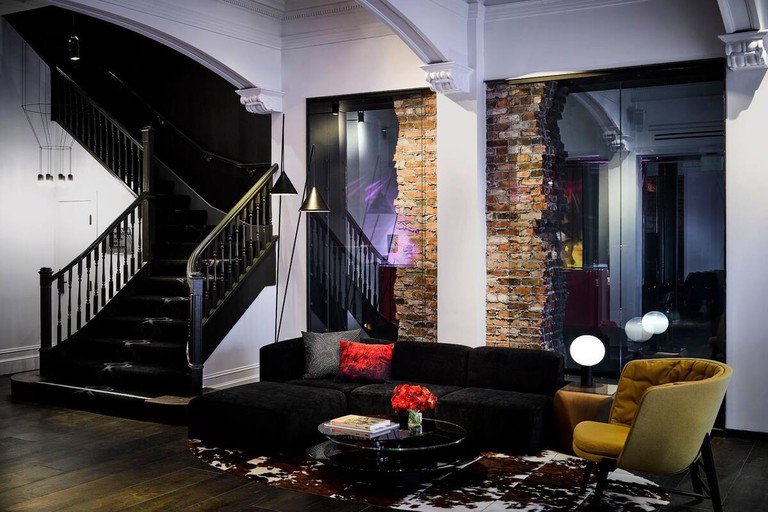 Courtesy of Hotel Zeppelin / Expedia
View Rooms
Like stepping into the abode of Mick Jagger himself, the Zeppelin drips with the animal prints and cracked leather of old-school rock‘n’rollers. The Mantel Bar – glowing from the flames in its gothic fireplace by day and blacklight-exposed poetry by night – serves up rock-inspired cocktails such as the spicy bitters and gin-infused Sympathy For The Devil. Buzzing from dawn till dusk, restaurant Rambler promises top-notch Californian fare in the shape of buttery sweet-potato gnocchi and wood-fired pizzas. Sleep it all off in forest-green rooms kitted out with blackout shades and in-room Nespresso machines, or take a shower among warped ’70s-style text in the en-suite bathrooms.
EVERYTHING YOU NEED TO KNOW 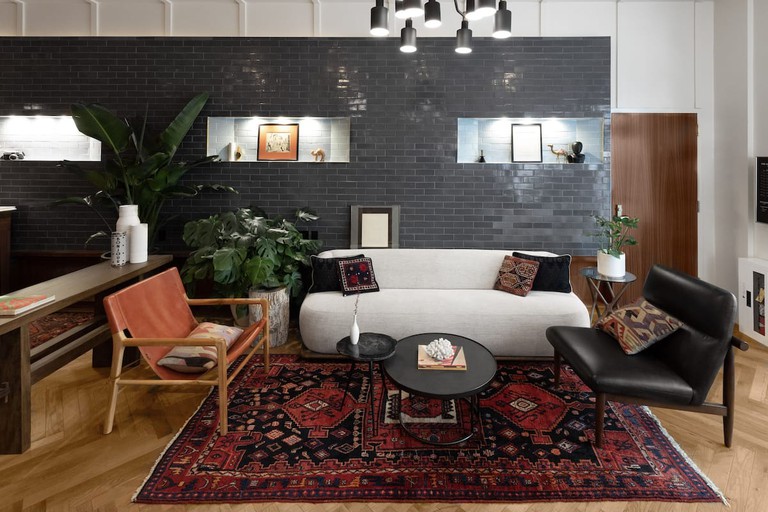 Courtesy of FOUND Hotel San Francisco / Expedia
FOUND San Francisco caters to both budget-conscious and solitude-seeking nomads. Shared rooms – which include a female-only option – have wooden bunk beds and lockers, while private rooms come with flatscreen TVs, en-suite bathrooms and pillowtop beds. The lobby lounge and co-working space give off a well-traveled, bohemian vibe, stacking shelves with globes, weathered books and eclectic figurines. Slide into a chestnut-leather booth at in-house restaurant Mason House to devour juicy burgers and wash them down with a refreshing beer.
Open In Google Maps
140 Mason Street, Tenderloin, San Francisco, California, 94102, USA
+14158436863
Visit Website
Give us feedback 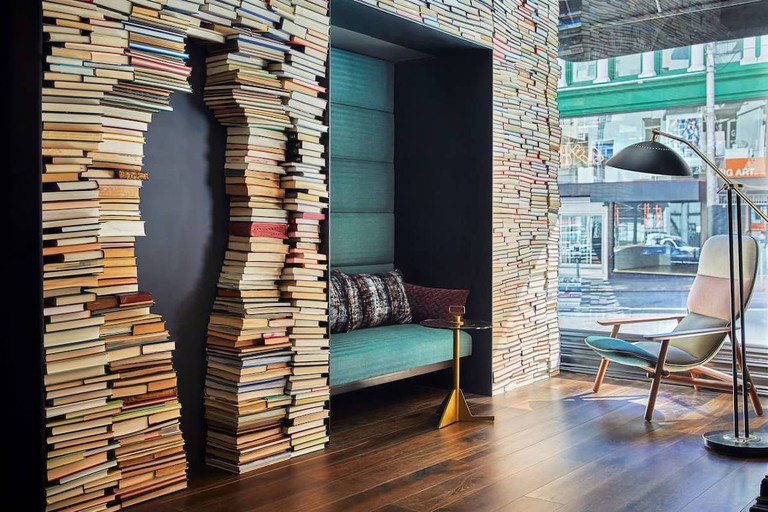 Courtesy of Hotel Emblem / Expedia
View Rooms
Inspired by the ’50s Beatnik spirit of non-conformist writers like Jack Kerouac and Allen Ginsberg, Hotel Emblem is awash with literary nods. Books spill from every nook and cranny: stacked floor-to-ceiling against the wall in the lobby, tucked into bedside tables in the rooms and piled beside murals of the aforementioned authors in the Obscenity Bar & Lounge. When you’re not there sipping cocktails (on-theme concoctions include the fruity H-Owl and the mezcal-and-absinthe Mexico City Blues), you’ll be curled up with a novel from the ‘book butler’, exploring the city on the hotel’s rentable bikes or typing up a letter home on the in-room typewriters.
EVERYTHING YOU NEED TO KNOW 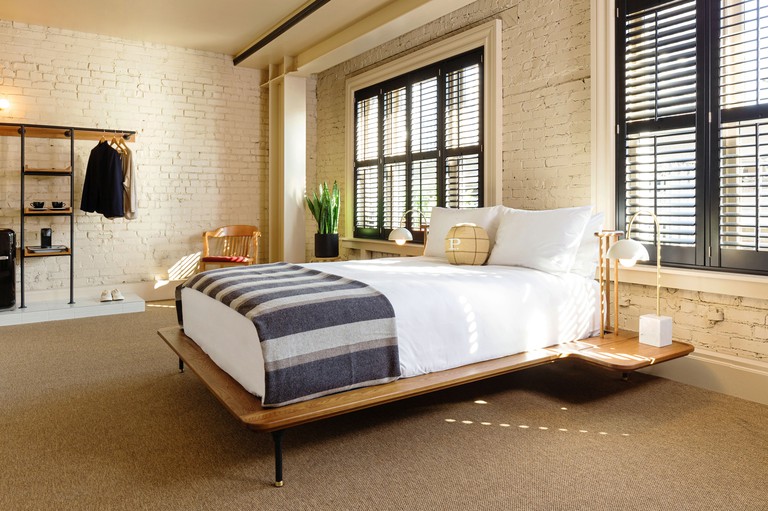 Courtesy of Palihotel San Francisco
View Rooms
Palihotel San Francisco is in the heart of the action – a quick hop from admiring Frida Kahlo pieces in the San Francisco Museum of Modern Art, munching on fresh fruit from the Ferry Building’s markets or geeking out at the Exploratorium. Fusing past and present California styles, the boutique hotel is drenched in warm tones and awash with plants fountaining from terracotta pots. Fully-stocked Smeg fridges and Nespresso machines are found in the honey-hued rooms, or you can tear through a charcuterie board and gulp down sugary Mexican Cokes in the vintage liquor-bar-slash-restaurant, Fisher Loft.
EVERYTHING YOU NEED TO KNOW 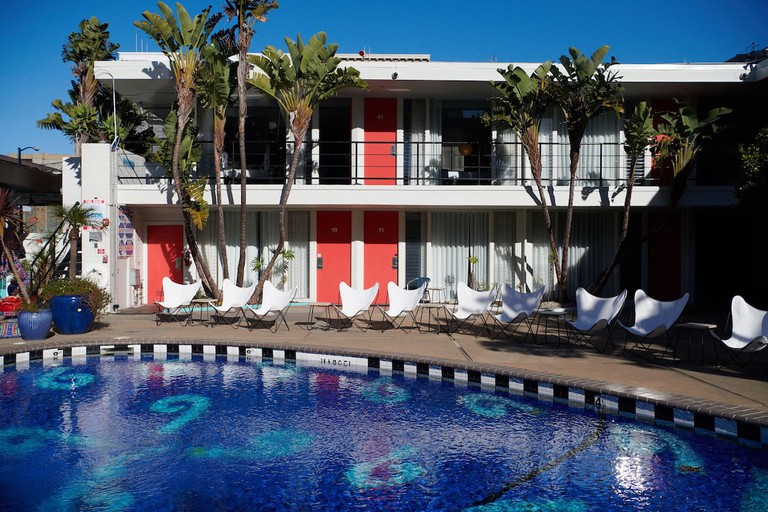 Courtesy of Phoenix Hotel / Expedia
View Rooms
This retro motor court hotel has been a popular haunt for rock stars since its 1950s inception, welcoming the likes of Kurt Cobain and Debby Harry through its doors. Donut inflatables float on an oval-shaped pool in a central courtyard – fringed by bowed palm trees, tangerine-colored loungers and pinstripe cabanas, it makes for an Instagram-worthy setting. The rooms are simple with vintage touches like neon-strip lighting and classic lipstick-red phones, but suites inject flair with a turntable (and collection of records), Illy espresso machines and treestump-style tables.
EVERYTHING YOU NEED TO KNOW
Give us feedback