SoMa – south of Market – hums with energy. Vibrating clubs, raucous baseball games and glitter-soaked cabaret shows make this San Francisco neighborhood one of the city’s liveliest. Dig into the history of the Barbary Coast, the city’s former red-light district, or cheer on the San Francisco Giants – here are Culture Trip’s picks of the area’s best hotels.

View Rooms
The Palace Hotel has been a go-to destination among the elite for more than a century. Over the years, many presidents have stayed here. However, one never left; Warren G Harding died of a heart attack in his room in 1923. Today, the hotel’s lobby and dining room are the most lavish in the city, boasting Austrian crystal chandeliers, Italian marble columns and a glass-domed ceiling. The Palace also houses one of San Francisco’s only indoor pools, and its on-site bar, the Pied Piper, gets its name from the original Maxfield Parrish painting adorning one of its walls.
More info

While many of San Francisco’s premier hotels pride themselves on their rich histories, Hotel Zetta flaunts its ultramodern chic. The 116-room hotel boasts ecofriendly amenities and found art throughout. Its on-site restaurant, the Cavalier, is a must if you’re a fan of upscale British cuisine, and the Playroom is exactly what it sounds like – a space for adults to unwind with billiards, shuffleboard and a 30ft (9.1m) Plinko wall. 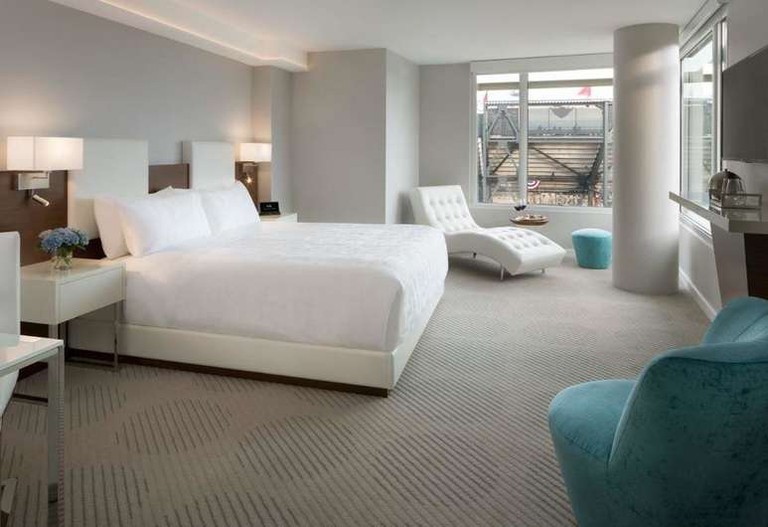 For baseball fans, you won’t find a better spot to base yourself than Hotel VIA, where SoMa meets Mission Bay, just across the street from Oracle Park – home to the San Francisco Giants. But there’s more to it than convenient location. The contemporary style is a modernist’s dream, with polished leather furnishings and chrome detailing, while the rooftop bar boasts 360-degree views of the city and the bay from 12 stories high. Settle around the fire pits to sip on champagne or dance the night away to a pulsing DJ set. 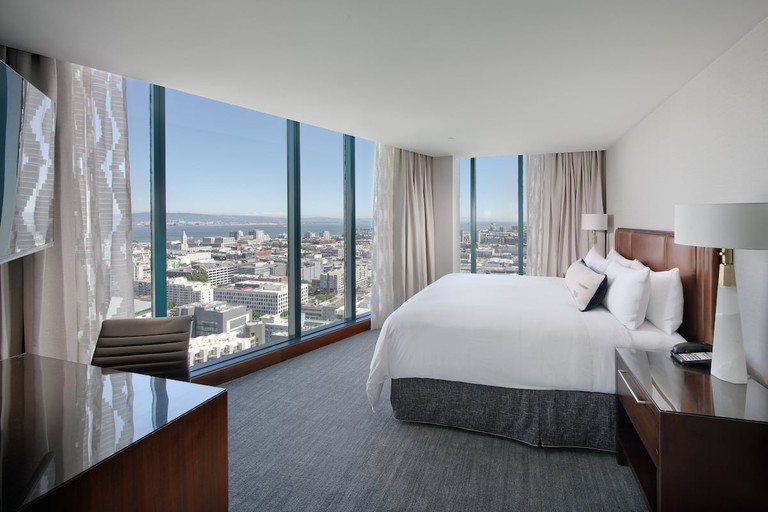 The InterContinental is a San Francisco landmark with its distinct cool-blue walls and 32 stories. The hotel is adjacent to the Moscone West Convention Center, making it a convenient place to stay if you’re here on business, but it’s also ideal if you fancy a treat. 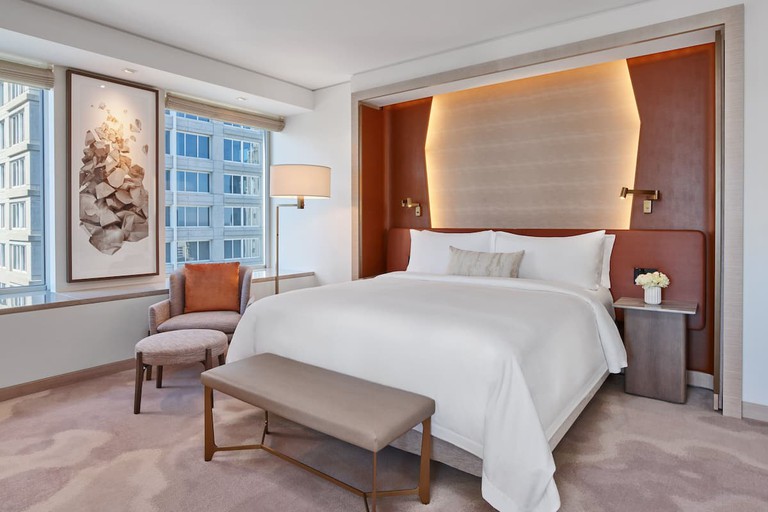 Courtesy of the St. Regis San Francisco / Expedia.com
View Rooms
With its striking neoclassical art, mirrored furnishings and butler service, the St Regis exudes luxury. The spacious rooms are decorated in a neutral palette with pops of rust-orange in the form of bespoke leather headboards and velvet cushions. Each comes with a deep-soaking tub and 55in plasma TV. The 260-room property is in the heart of SoMa, right next to the San Francisco Museum of Modern Art and the Museum of the African Diaspora.
More info 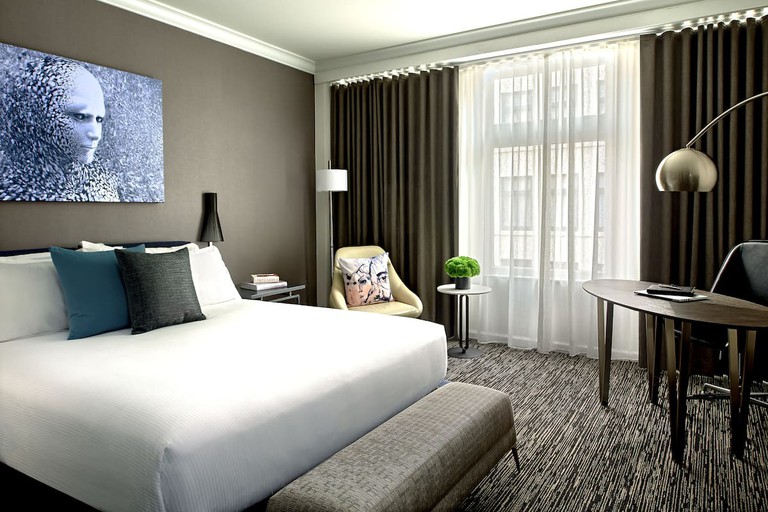 Hotel Zelos is as close to Market Street as you can get and still be considered SoMa. The historic property was built in 1907, but what’s inside is as progressive as it gets. The 202-room hotel is also an art gallery and you can have your dog stay too – albeit for a $75 cleaning fee. For human guests, the Dirty Habit restaurant-bar is a great retreat for a bite and drink five stories above the street. 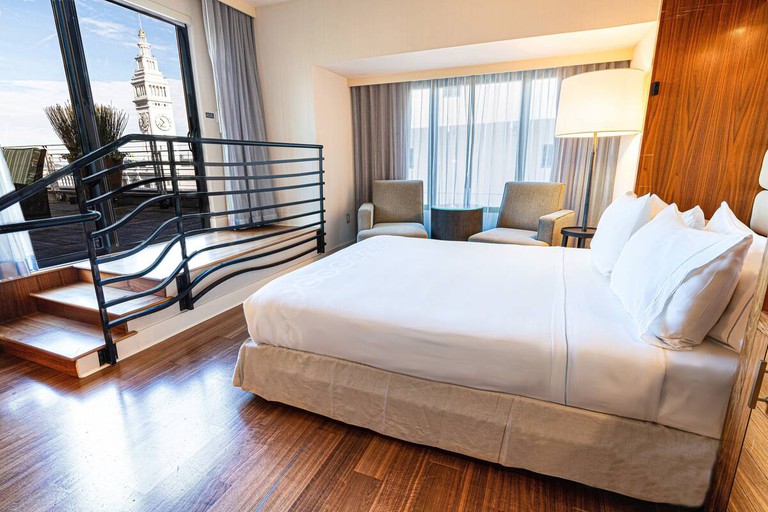 Hotel Vitale, on the Embarcadero, is a great option for those who want a relaxing, refined hotel. The rooftop spa has soaking tubs complete with views of the bay and amenities such as a pillow menu, in-room Bose music systems and a $40 per night “urban fee” that includes daily passes to the adjacent YMCA, coffee and tea service and high-speed wifi. The Americano Restaurant & Bar serves seasonal, locally sourced dishes that you can enjoy on the outdoor patio, along with sweeping views of the bay. 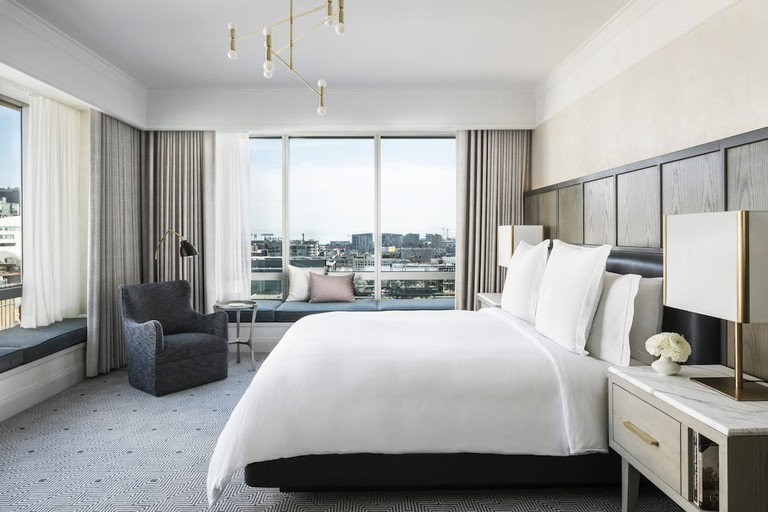 Four Seasons is synonymous with luxury, and this outpost is no different. The five-star hotel includes an in-house spa featuring an extensive menu of massage and body treatments. The MKT Restaurant-Bar boasts sustainable seafood and craft cocktails with a California twist while giving visitors 180-degree views of Market and Downtown. 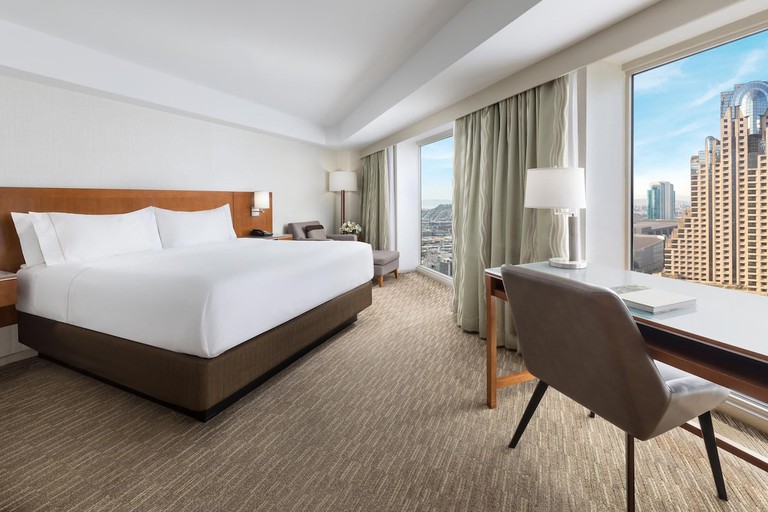 The Park Central San Francisco is within walking distance of the city’s best museums and Oracle Park and a short walk to Union Square, the Financial District and the Embarcadero. It offers a complimentary hour of wine and hors d’oeuvres seven days a week, and the MaSo restaurant gives visitors the option of à la carte and buffet dining for breakfast, lunch and dinner. 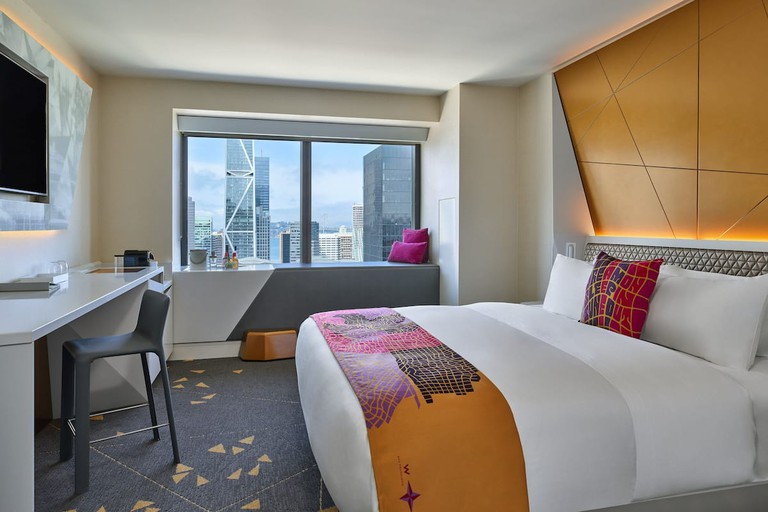 The W pairs an ecoconscious mindset with the brand’s signature sleek design. In the lobby, you’ll find hollow cubes of vivid-blue lighting and an art installation reminiscent of jellyfish. Things are equally artsy up on the roof, where a curling metal sculpture, Pneumatic Dreamer, is on display. Gilded headboards in the rooms nod to San Francisco’s gold-mining past, while energy-efficient lighting and motion sensors preserve energy. The hotel keeps bees, whose honey is used in the cocktails they serve at the bar. There’s also a state-of-the-art fitness center with color-changing lights and the farm-to-table restaurant Trace.