The Halal Guys | © Max Wei / Flickr
Halal means anything that is permissible in Islamic law. When applied to meat, halal refers to meat that has been sourced and slaughtered in an acceptable way. (This excludes pork products, which are never considered permissible.) Both Muslims and non-Muslims may enjoy halal food, which includes various flavorful dishes from several cultures. Here are six of Los Angeles’s top restaurants for authentic halal cuisine.

This casual Somali restaurant opens at 6 a.m. for breakfast, of which the most popular item is anjero (akin to a crepe) served with beans. Meals served later in the day at Banadir Somali Restaurant include meats, most notably goat, served with rice or in a stew. Somali dishes include a banana, which is eaten with the meal, and it is, contrary to one L.A. Times reporter’s mistake, not an appetizer or dessert.

Urban Skillet, located in North Hollywood, specializes in 100% halal Asian fusion fare. The menu includes a kimchee burger, a burrito with kimchee fried rice, and a “philgogi cheesesteak,” which subs Korean BBQ for the primary meat on an otherwise traditional Philly cheesesteak. Aside from their hearty rib and chicken plates, most items are under $10.

The Halal Guys® started out as a gyro cart in New York City in Midtown, where their chicken and beef plates won over tipsy New Yorkers craving savory street fare. They would go on to expand with several additional carts and eateries in New York before Angelenos would get their very first Halal Guys outpost in Koreatown in July of 2016. The menu is small and simple, consisting of platters or sandwiches made with either chicken or beef gyro. You can’t go wrong with a combo platter, smothered with their special white sauce and a touch of hot sauce. 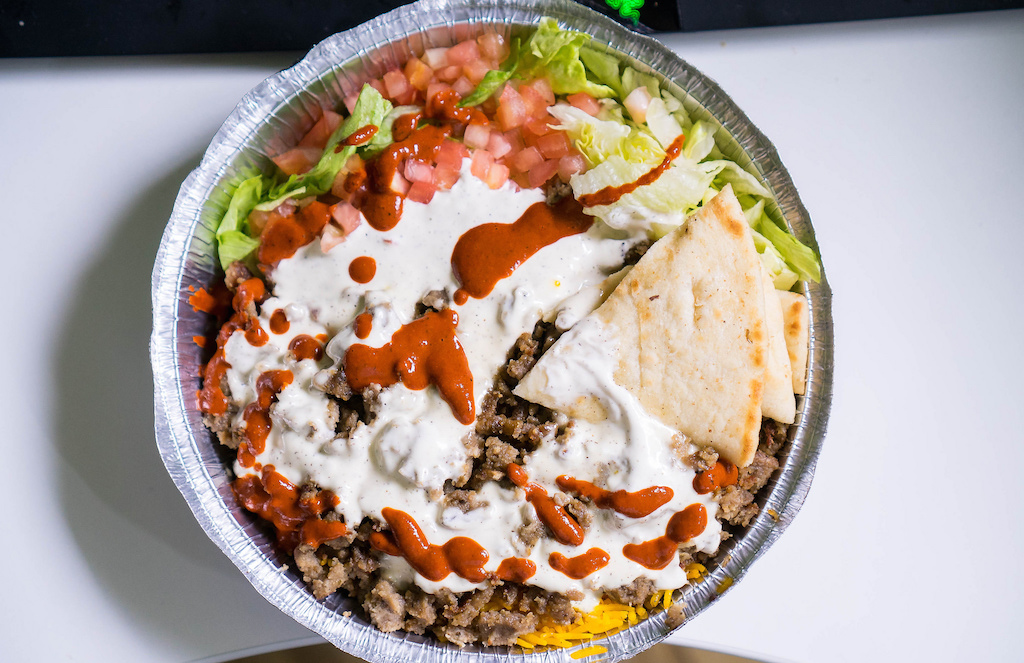 Zam Zam Market moved from Culver City to Hawthorne in 2016, but it still serves up delicious Pakistani and Indian food in a bare-bones space. The menu is quite small, but they’re best known for their lamb pulao, served on Friday afternoons, and a chicken biryani that many visitors claim is the best in the Los Angeles area. Zam Zam Market’s name is not a misnomer; you can also buy various sundries here. Closed on Mondays, and you may want to call ahead as hours can vary.

Zam Zam is back and in a new location. You can get your biryani fix again. Tag your photos #dineLA for a chance to be featured. #zamzammarket #hawthorne | 📷 RG: @secretstan

Aldewaniah sits near USC, where it is popular with students looking for halal food. Guests may choose to sit at a table or on cushions on the floor. They offer a variety of Arabic dishes, plus pizza, and hookah is available on the patio.

India’s Restaurant, located in Hollywood, is available for both dining in and delivery. They offer Indian cuisine using 100% halal meat. Their lunch buffet, served from 11 a.m. to 3 p.m., is popular with locals. Vegetarians will also find several options.

With Aldo at our favorite India Restaurant is India's Restaurant!!!