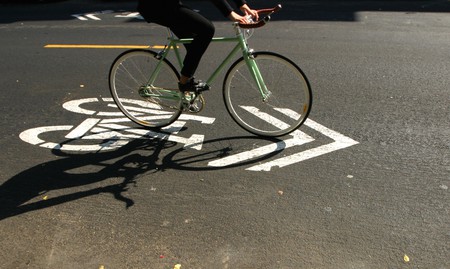 Leave your car at home and hop onto your bicycle to get the most out of exploring San Francisco. The city has become one of the most bike-friendly cities in the United States. From the beach to hipster workshops in the Mission, across the Golden Gate Bridge, don’t worry about the hills, the bike lanes specifically avoid the steepest ones.

Starting outbound from Market Street and turning left at the lights for Valencia Street, cruise along the Mission on this flat stretch of road that sees more bike traffic than any other street in San Francisco. It is the bicycle gateway to the Mission and a hub for everything food, fashion and retail related. You can easily park your bike and hot spots like Dolores Park, Bi-Rite Market and Tartine Bakery are just around the corner. Crazy feature: the traffic lights on Valencia Street are timed at bike speed.

The advanced bike culture that San Francisco hosts is especially visible on a route called ‘The Wiggle.’ Coined as the most iconic bike route of San Francisco, ‘The Wiggle’ snakes its way through several streets: Duboce, Scott, Waller up to Fell and Oak, and ends at the Golden Gate Park. You go left and right to avoid the steep hills of Haight Street and the lanes are well-marked and used often. This is the bike way to the Sunset, Richmond, and NOPA. But you can always continue onto Fell to explore Golden Gate Park. 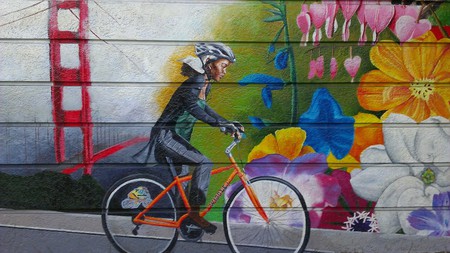 From ‘The Wiggle’ you can directly access Golden Gate Park and all its bicycle opportunities. Biking is probably the best way to see all of this giant park, from the Japanese tea garden to the Dutch windmill. Sunday is the perfect day to explore: the park is closed for cars and open to all pedestrians and bikers. There are seven miles of paved trails and John F Kennedy Drive has a protected bike lane. There are also many bike rental companies scattered across the park.

Still have some energy left from that ride through Golden Gate Park? Follow the Great Highway south for about four miles of rather flat road to the recreational area of Fort Funston. It’s a great ride next to the beach, past the San Francisco Zoo and into the park. There is an endless amount of activities to do in the park. You can ride along Lake Merced as well. All in all, this is a rewarding tour around a less touristy area of San Francisco.

The hills up to Nob Hill, Russian Hill and Marina are steep, but you can avoid that by cycling up on Polk Street, one of the flattest north/south routes in the city. You can even cycle all the way from City Hall to Fisherman’s Wharf without breaking a sweat. You pass many great little shops and cafes, which are so much easier to access by just parking your bike. A word of warning: cycling on Polk Street can also be dangerous, since it is a busy street. There are bike lanes, but they are not protected.

One of the most popular and touristy things to do in San Francisco is to cycle across the Golden Gate Bridge, and it’s absolutely worth it. Start at Fort Mason and continue on to Crissy Fields, where you have an easy path with some Bay breeze until you climb up to the bridge. The path is shared with pedestrians so be careful! You can bike all the way across to Sausalito or, if you’re feeling active, follow the bike lanes to Tiburon and catch the ferry back to the San Francisco Piers. 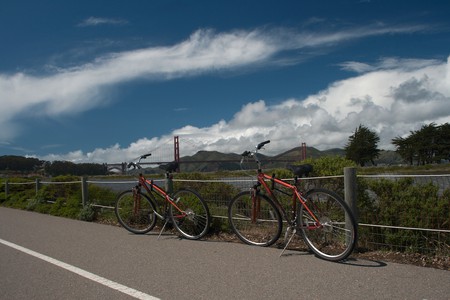 Looking for a little bit more than just cruising in the city? Head up to Land’s End with your mountain bike. Often quoted as one of the most beautiful hikes in San Francisco, bicycles are allowed on most trails and the views of the rocky coast, the Golden Gate Bridge, and the Pacific are stunning. You can’t get everywhere with a bike, but the dirt trails you can access are well-maintained, well-signaled and it’s a great ride.

Tired of riding around the city? Angel Island State Park is a perfect getaway with your bike. So grab your bike and helmet and head to Pier 41 to catch the ferry across to Angel Island. There is a bike trail that circles around the island and it is a great way to see the Bay Area from all different sides. If you don’t own a bike, you can rent one there. The trail is marked as medium, so there are a couple of slight elevation gains to keep you active while taking in the superb views. 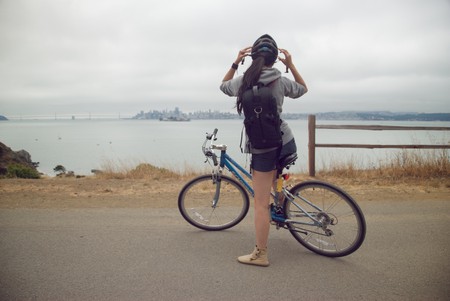 Even though the bicycle lanes are a great addition to San Francisco and many bike-lovers’ hearts, many times you still have to share the road with cars, buses, and trams. Be careful! Wear a helmet, reflective clothing, and if you are riding in the evening, have bike lights!

Check out The San Francisco Bicycle Coalition to see exactly where the bicycle lanes, parking, and share stations are, as well as other information on biking in San Francisco.