The 5 Nerdiest Murals In San Francisco

San Francisco has always had an appreciation for murals. In just about any part of the city, one can find walls decorated with artists’ vibrant displays encapsulating the city’s history or the voice of the people. Many resonate with cultural heritage spanning decades and are filled with deep, emotional artistic expression. This is not one of those times. These are murals by nerds, for nerds. 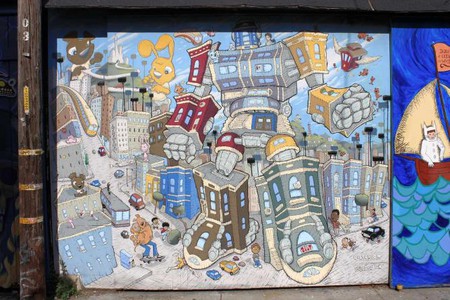 Rick and Morty | © Justice Boles
This mural is by Sirron Norris and located in Balmy Alley in San Francisco’s Mission District. This is the least nerdy mural on this list, as well as the only one with a deeper political subtext. Balmy Alley has a history of murals with social commentary, and Norris follows suit with Victorion, a Power Rangers/Voltron-esque protector robot assembled from Victorian-style houses in SF in order to combat the forces of gentrification in the Mission. Unfortunately, due to an error in Victorion’s programing, it was unable to protect San Francisco from the most recent kaiju attack. 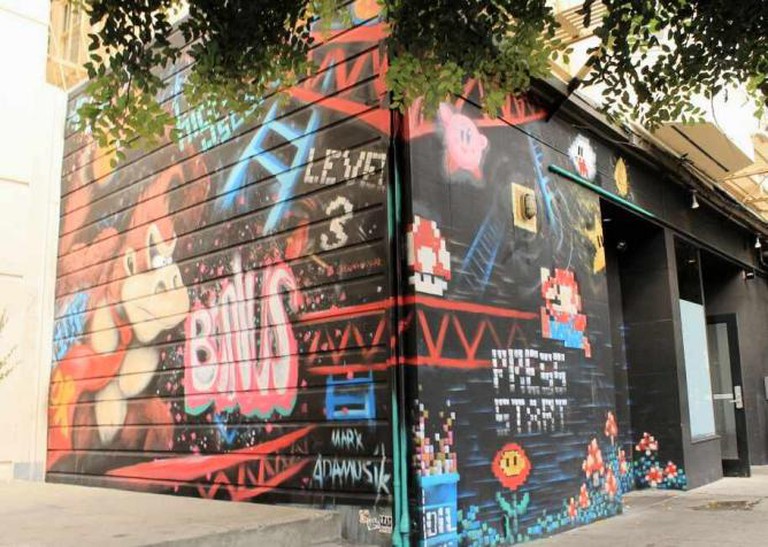 Donkey Kong | © Justice Boles
Rick and Morty is a fantastic sci-fi animated comedy that just begun it’s second season on Adult Swim. However, after one mere season, artists Rpes and Rekor of The PMB crew conjured this mural in Taber Alley off 3rd and Bryant. The mural depicts the amoral super scientist alcoholic, Rick Sanchez, and his rightfully anxious grandson/sidekick, Morty Smith. The duo appears to be fleeing from Morty’s mentally enhanced dog, Snowball — his name was Snuffles until he cast off his oppressive human name and adopted one more befitting his pretty white fur. Any nerd worth their salt will love this mural. WUBALUBADUBDUB!

Superheroes | © Justice Boles
This work of art is probably the newest of these wonderful creations. So new, in fact, it can’t even be found on Google Street view. Wrapped around the corner of 12th and Folsom, artist Mark Adamusik pays loving tribute to the grandfathers of Nintendo, the two characters that kick-started a generation of arcades and gamers: Donkey Kong and Jumpman! Oh, what? His name is Mario? When did that happen? That’ll never stick. No one is going to play a game called Mario.
Bonus Round: A 1-up for any eagle-eyed viewers who recognize everyone’s favorite pink puffball, Kirby. 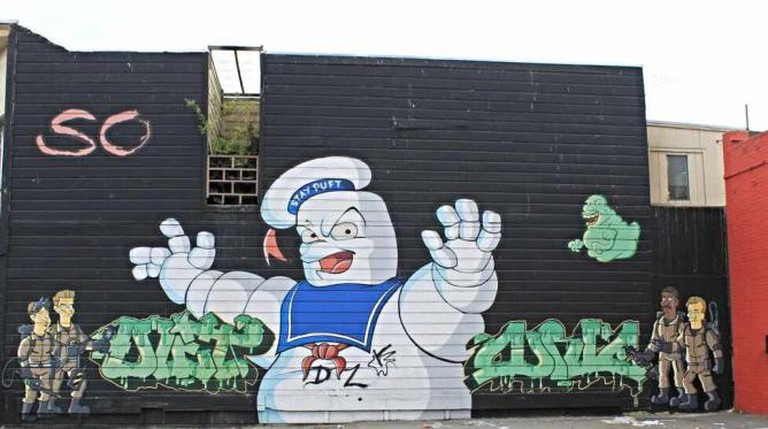 Ghostbusters | © Justice Boles
This one is an interesting one. This piece features a collection of various superheroes and supervillains on opposite sides preparing to duke it out. This mural, done by Keb, Wand and Buter of the ICP Crew, was done way back in 2009 and is at the corner of 19th and Mission. It displays over a dozen heroes and villains from both Marvel and DC. This comic book nerd wonders how Dr. Doom could ever team up with Lex Luthor. That’s a little like Stalin and Hitler joining forces. Conceivably, it could happen, but neither is going to take second billing to the other. Doesn’t matter, still awesome.

Building
Facebook
Email
Twitter
Pinterest
Copy link
Share
This one is most likely the nerdiest mural in San Francisco. Found at 8th and Bryant, artists Diet and Curve capture iconic nerd heroes, the Ghostbusters, on a wall with the infamous Stay Puft Marshmallow Man and token ghost, Slimer. They did so in homage to pop artist Dean Fraser who draws famous characters as if they were Simpsons characters. It’s like some sort of geeky Inception. It’s the sign of a true nerd, and the Ghostbusters are the true nerds’ heroes. Sure, nerdkind will always value the superheroic and fantastical; Spider-Man, Gandalf, Luke Skywalker stand atop pedestals. The Ghostbusters, however, were SCIENTISTS! No superpowers — other than Peter Venkman’s quick wit — just 4 guys with proton packs driving around in an ambulance/hearse in order to science away the supernatural. Who YOU gonna call?
By Justice Boles
Justice Boles teaches Shakespeare to inner-city kittens and can be reached by Facebook, Twitter, or by saying his name 3 times into a dark bathroom mirror.
Give us feedback