Even though we can’t smell the enticing scents of food shown on screen, simply seeing it may be enough to make us salivate. Here are some celebrated movie scenes that celebrate food in all its glory. 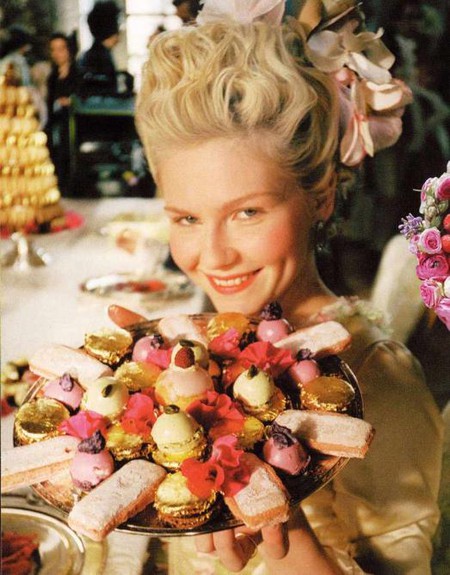 If Marie Antoinette ever said “Let them eat cake!,” she was probably referring to bread. However, Sofia Coppola’s film of the same name indulges the more fanciful idea that she was referring to fancy cakes. Where the film fails as an accurate representation of the historical figure’s life, it more than makes up for it in its exhibition of these famous and delicious desserts. Petits fours, millefeuilles, cannel, and countless other mouthwatering delicacies fill the screen, with the color grade making them all jump out.

Babette’s Feast is about a selfless Lutheran woman who wins the lottery and uses her winnings to cook up sumptuous meals to thank those close to her. The film more than delivers as a feast for the eyes. Rich red wines, desserts, and other Gallic delights dominate the screen. We should all hope to have a housekeeper, or more realistically, a close friend, who hits the big time and is able to exhibit their spectacular cooking skills.

Chocolat has so many shots and scenes that celebrate most people’s favorite sweet treat, but it is this one scene that really sticks out. While the setting up of the shop and Alfred Molina’s binge are both beautiful scenes, in their own way, it is the chocolate feast that best celebrates the wonders of chocolate. Chocolate with a roast chicken may seem pretty out there on paper, but on screen, it seems like a decidedly good idea. This meal most probably would be painfully rich to eat, but that doesn’t mean we still wouldn’t like to try it.

Any film with “eat” in the title would be doing a disservice to itself if it didn’t have at least one scene that celebrates eating. Ang Lee’s Eat Drink Man Woman grips the viewer from the start by showcasing cooking as an art form. Retired senior chef Chu prepares and cooks an elaborate Sunday banquet for his family. Feel the rhythm and focus that goes into making such a splendid feast, and the care and attention that goes into presenting something that looks this appetizing.

Mafia films set quite the precedent when it comes to cooking scenes. There are several to choose from in the The Godfather Parts I and II and Goodfellas, but the latter wins out with its prison feast. The scene at Tommy’s mother’s house is another close contender, but the passion of the cooking in the prison scene inches it out as the winner. Slicing garlic so thinly with a razorblade – it is prison after all – that it melts in the pan is the stand-out moment. Marvel at the culinary technique with a side of comedy. 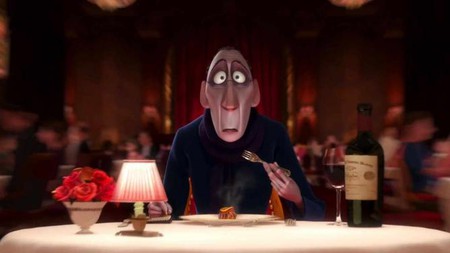 The Pixar film Ratatouille vividly conveys the excitement that comes from cooking and eating. When stuffy critic Anton Ego takes a bite of the ratatouille, a peasant dish that has been refined by star chef Remy the rat, he is immediately taken back to his childhood and compelled to write one of his few good reviews. This is a rare animated scene that manages to remind adults and children alike of the power of food.

From the cooking to the eating of this lunch, you can really feel the seductive power of food. Emma, played by Tilda Swinton, is an industrialist’s wife who is about to be seduced by the cuisine of her son’s best friend. As she digs into her plate of succulent prawns and vegetables, the sounds and colors of the dining room fade and her senses dull. Her trance is broken as the talented young chef re-enters, and so begins a great change in Emma’s life.

The quest for the perfect strudel is all-consuming, even when you have more pressing matters at hand. In Inglorious Basterds, SS Captain Hans Lander puts his dinner partner Shoshanna Dreyfus on edge as he rambles on endlessly about his tasty whipped cream-topped strudel. He even implores his guest to do the same in what must be one of the most uncomfortable moments of her life. “I did have something else I wanted to ask you,” Lander concludes, “but right now, for the life of me, I can’t remember what it is.” Good strudel does that to a man.

There are few loves more pure than that between a child and dessert, and this scene from Once Upon a Time in America shows this love as it begins to morph into lust. Patrick Goldberg is straddling youth and adulthood during this scene, wherein he tries to exchange a charlotte ruse for sexual favours. Regardless of the explicit reasons for buying the confectionery, the whipped cream-topped pastry still pops from the screen and we can see in young Paddy’s face that longing for food is just as real as it is for a woman, even if the latter need is ultimately stronger. 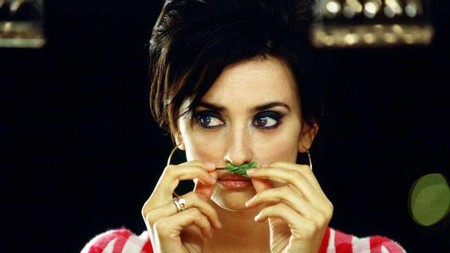 Sometimes a girl just has to step up to the plate and do it herself. When her restaurateur neighbour leaves town without warning, Raimunda (Penélope Cruz) has to create and deliver a three-course meal consisting of local specialities for a thirty-strong film crew. Volver amps up our appreciation for Cruz, who comes across as quite the whiz in the kitchen, and the crew seem to enjoy her ad hoc creation. If only we could be this proficient when faced with cooking for company on the fly.

If you happen to be a mobster, you can exert your dominance by adding as much decadent food to your plate as possible. This is the tack taken by Reeves (Ray Winstone) in Ripley’s Game. As the waiter shaves the truffle onto Reeves’ fresh pasta, Reeves continues to demand more, creating one of cinema’s most awkward waiter-customer scenes. This dish may be too rich for some, but the scene definitely shows how you can use food as a tool in power play, even if its to the chagrin of the waiting staff.

It’s hard to pick just one great food scene from Tampopo, which is a film about a noodle shop. The sensuous egg scene is a fierce contender, but if anything it just makes you want to steer clear of food for a few hours. This scene offers up a humorous yet insightful take on the differences between eating noodles and spaghetti the Japanese and the Western way. Take note of the Japanese method if you want to avoid getting side glances in restaurants in future. There’s no reason why noodles can’t be tasty and eaten elegantly.