Pool table in a bar | © WikiCommons
San Jose is part of Silicon Valley so it’s no wonder it has a vibrant night life with plenty of nightclubs and bars to choose from. All serve the usual drinks, but you’ll also find some unique local draft beers and even fine Californian wines. We pick the best spots to have a drink on a night out in this California city.

Bar, Pub Grub
Wines | © WikiCommons
7 Stars Bar and Grill is an outer space and Star Wars themed bar which is completely decked out in Star Wars decorations such as posters, a cut out Darth Vader, and a life sized Jabba the Hutt. 7 Stars Bar even has Star Wars themed drinks such as the ‘pickle light saber’ cocktail, and also has a good menu of other cocktails as well as a selection of whiskies, vodkas and rums. 7 Stars also serves small bites such as fries and potato skins, as well as larger bites; mainly burgers and chicken strips.
More Info
Open In Google Maps
398 South Bascom Avenue, Central San Jose, San Jose, California, 95128, USA
+14082927827
View menu
Visit website
Visit Facebook page
Send an Email
Give us feedback

Bar, Wine Bar, American, Pub Grub
Drinks at O'Flaherty's | Courtesy of O'Flaherty's
Vintage Wine Bar is a wine bar on Santana Row owned by the Vintage Wine Merchants. Vintage Wine Bar has a large selection of wines, many of which are locally made in Napa, California but some of which are imported from Italy and France. To go with them, it serves small, classy bites such as truffle cheese with crackers, triple cream brie with honey and bread, sandwiches, meat plates, and cheese plates, and offers port wines as well as chocolate bars for dessert.
More Info
Open In Google Maps
368 Santana Row, West Valley, San Jose, California, 95128, USA
+14089859463
View menu
Visit website
Visit Facebook page
Send an Email
Give us feedback

Bar, Pizzeria, Restaurant, American, $$$
Jake’s of Willow Glen is a restaurant and bar in the Willow Glen area of San Jose that serves pizzas and comfort food as well as beer. Jake’s has a selection of craft beers on tap and also serves California wines. Jake’s is best known for its signature, handmade pizzas, with interesting combos such as the ‘gilroy special’ and the ‘chicken garlic supreme.’ In addition to pizzas, Jakes also serves sandwiches, soups, and salads. Customers at Jake’s can sit inside the sports bar or outside on the patio, where dogs are allowed.
More Info
Open In Google Maps
1074 Lincoln Avenue Unit A, Broadway - Palmhaven, San Jose, California, 95125, USA
+14082877960
View menu
Visit website
Visit Facebook page
Send an Email
Give us feedback

Haberdasher is a bar that evolved out of a speakeasy and now serves unique and creative cocktails. If customers reserve tables, while they’re seated, the bartenders will offer the Haberdasher’s special ‘Made to Measure’ cocktails service, where the bartenders select drinks for their customers based on their personal preferences. Haberdasher also offers a ‘liquid supper’ option for their table side guests, in which there are three or four courses and a ‘Made to Measure’ cocktail chosen for each course. 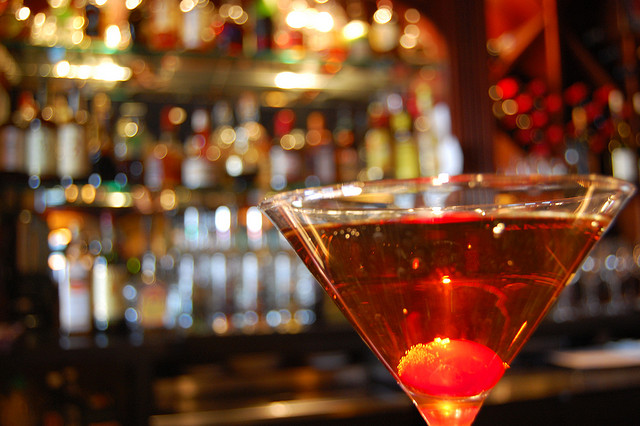 Paper Plane is a laid-back cocktail bar on 1st street. With a long bar surrounded by exposed brick walls, and a classy drinks menu with upscale bar bites, Paper Plane has a stylish yet fun vibe. Paper Plane has a variety of homemade, hand-crafted punches on tap that change with the changing seasons. There is also a long list of classic cocktails. including their own signature cocktails ‘up in smoke’ or ‘thyme is on my side,’ and cocktails from bars around the world such as the ‘8 Amaro Sazerac’ from Amor y Amargo in New York City.

Cafe, Restaurant, Turkish
At Harry’s Hofbrau on Saratoga Street, flags hang from the ceiling and comfort food is served school cafeteria style, adding to the casual, fun atmosphere. Harry’s Hofbrau has a large selection of beers on tap and is known for its whole-roasted turkeys, which customers can see rotating as they walk into the lounge and restaurant. The turkey goes in their sandwiches and other dishes, and in addition to turkey meals, Harry’s has a selection of other comfort foods such as macaroni and cheese and corned beef.
Permanently closed
More Info
Open In Google Maps
View menu
Visit website
Visit Facebook page
Send an Email
Give us feedback

Bar, Charcuterie, Wine Bar, Pub Grub, $$$
Vino Vinois a wine bar that prides itself on serving high quality wines with no pomp or fuss, following their slogan, ‘wine without attitude.’ Vino Vino is a step up from the traditional cocktail bar with shots and booze, and yet still serves as a comfortable middle ground under what they consider snobby wine bars. Vino Vino serves both local bottled wines as well as wines on tap. The bar also has a selection of high class bar foods like crostini, panini, cheese and charcuterie plates, and salads.
Permanently closed
More Info
Open In Google Maps
87 North San Pedro Street, Downtown San Jose, San Jose, California, 95110, USA
+14087032333
View menu
Visit website
Visit Facebook page
Send an Email
Give us feedback

Stevie’s Bar and Grill is a fun, lively neighborhood bar with communal tables for everyone to sit together and make new friends, as well as pool tables and a dart board. Stevie’s Bar and Grill has great cocktails as well as a selection of beers, and it serves many tasty bar bites, such as deviled eggs loaded with bacon, honey buttermilk fried chicken, and spice encrusted chicken wings.

Bar, Restaurant, Pub Grub
KC Bar is a fun sports bar on Leigh Avenue that has a large variety of beers on tap as well as cocktails and special drinks. KC Bar has a grill and restaurant with a variety of burgers including the ‘special Mikey melt bacon jalapeño burger,’ plus sandwiches, hotdogs, salads, chicken wings, fries, jalapeño poppers, mini corn dogs, fried mushrooms, and fried zucchini sticks. This spot has fun, loud, bright decorations, and big television screens that make it the perfect place to watch the big game. Have too many Jello shots though and your head won’t thank you.
More Info
Open In Google Maps
1070 Leigh Avenue, Barbera - Stokes, San Jose, California, 95126, USA
+14082791790
View menu
Visit website
Visit Facebook page
Send an Email
Give us feedback
Give us feedback