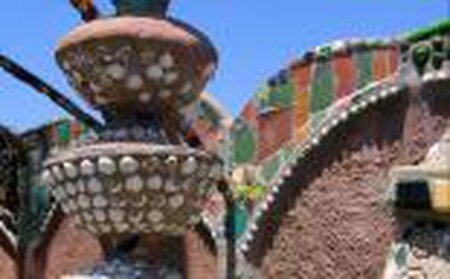 The Watts Towers in Los Angeles are overtly reminiscent of the architectural works by Antoni Gaudí. Built by Italian immigrant Simon Rodia, the towers are part of a grouping of 17 works within the Simon Rodia Historical State Park. We take a look at the eccentric man and his design legacy. 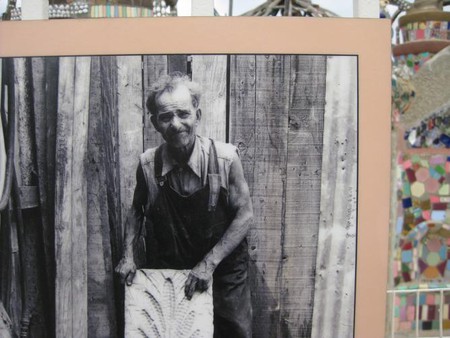 Information about Rodia’s early life is scant at best. He was born as Sabato Rodia in 1879 in Ribottoli, Italy, but went by Sam. A 1937 Los Angeles Times article riddled with errors referred to him as “Simon Rodilla,” and the first name stuck throughout history. As a young teen, Rodia immigrated to the United States where he settled in Pennsylvania for a while with his brother, who was working there at the time. In his late teens, Rodia moved to Seattle where he married his first wife, Lucy. They moved to Oakland and started a family, but they eventually divorced due to his alcoholism. He had two other relationships, but they both ended as well. Throughout his life, Rodia worked in rock quarries, logging and railroad camps, construction, and tiling, which allowed him to procure various skills to help in the creation of Watts Towers. 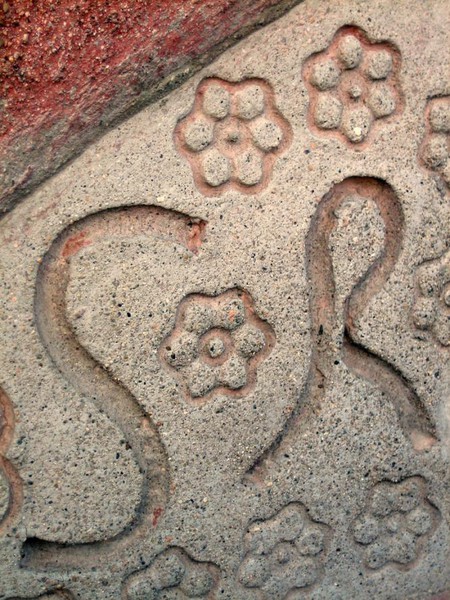 The Watts Towers, or as Rodia called it, Nuestro Pueblo (Our Town), is set on a triangular piece of land at 1765 East 107th Street, which he purchased in 1921, in the Watts area of Los Angeles, California. Ascertaining why he decided to start this project is not easy. Some people think that the works may be a homage to Italy and his childhood while others believe it was a way to distract himself from drinking. There were even rumours that he had buried his wife under one of the towers making it an elaborate shrine; however, that rumour was just that: a rumour. Rodia was a private man and often gave conflicting and vague answers when interviewed. When asked about Nuestro Pueblo, he stated, “I had it in mind to do something big, and I did.” 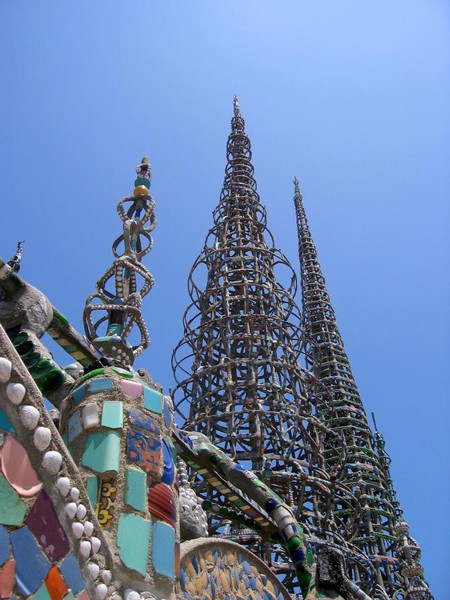 Finding inspiration in other people’s disregarded items, Rodia began to construct a grouping of several assemblage sculptures made with more than 70,000 pieces of colourful found objects, steel rebar, and metal items, such as bed frames. An amazing feat showing the power of human will, he used only the simplest of tools, including a hammer, chisel, and his own two hands, to build seven towers, fountains, a gazebo, a garden, a sculptural ship, and a 140-foot scalloped wall. He began the construction of the Watts Towers later in life when he was 43 years old, and with his tenacity never wavering, he worked on it for a solid 33 years. With no design plans drawn up and with no help from anyone, he took the project on day-by-day by himself. While he worked during the day to earn a living, his sculptures came to life during the evenings and weekends rarely giving him time to rest. 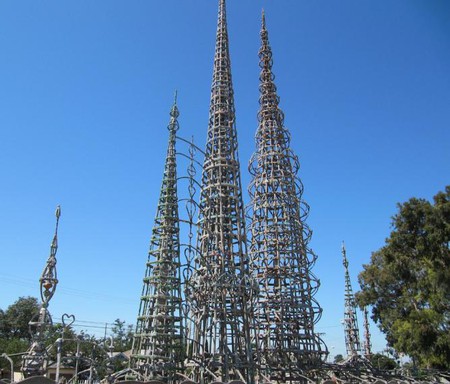 While Rodia was not a trained artist and probably would not have even considered himself one, he signed his work, as many artists do, with his initials engraved in mortar in numerous areas. One of the first elements Rodia built was the scalloped wall that enshrouds the front of the property. It is a colourful partition adorned with broken tiles, bottles, seashells, and bas-relief and impression designs, such as hearts, rosettes and the letters “SR” in mortar. Inside, the towers are webs of embellished steel rebar constructed without the use of bolts, nuts, or welding.

Set approximately 20 inches in the ground with cement footings, Rodia built them by overlapping sections of rebar, wrapping the joints in wire mesh, and then packing cement in and around them with his hands. He also never used any scaffolding to assist in the building of the towers, the tallest of which rises to almost 100 feet. Attaching circles of steel to the towers, which he shaped by bending between rails of a nearby train track, allowed Rodia to climb the structures while continuing to add height. As with the wall and the other sculptures, including the Marco Polo ship, the towers are covered with mosaic decorations of various found objects and impressions made from items such as handprints, various tools, parts of automobiles, and even fruit. Anything that Rodia found and thought to be useful, he utilised. 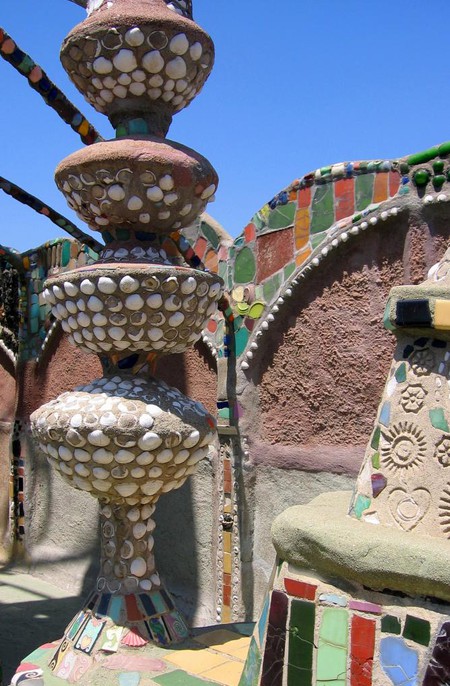 After Rodia had finished the towers in 1954, he deeded the property to his neighbour and left Watts never to return; the reason is unknown. His neighbour sold it to another man a year later, who ignored an order by the city to tear the structures down because they were deemed dangerous, and nothing happened with Nuestro Pueblo again until 1959. William Cartwright and Nicholas King, a film editor and actor, respectively, purchased the property and created the Committee for Simon Rodia’s Towers in Watts in order to save it.

Before this point, the towers were not seen as art because nobody understood them; however, with assemblage taking a stronger hold in the art world, people became more interested in Rodia’s work and wanted to avoid losing it. Various members of the public came together and proposed a stress test on the largest tower; if it passed, then they would not be torn down. The city agreed, and the test took place. Rodia’s work passed with flying colors. 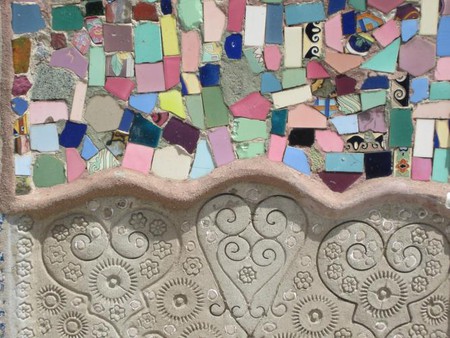 Rodia’s towers had, thus far, survived earthquakes, inclement weather, and a stress test, but would it survive the Watts Rebellion of 1965? The socially and economically disadvantaged area in Los Angeles, Watts, with its largely African-American population, experienced growing civil unrest, discrimination, and racial injustice that came to the boil on August 11, 1965. Violence ensued for six days, causing millions of dollars worth of damage, 34 deaths, and destroying much of the community; however, Watts Towers rose from the ashes unharmed becoming an iconic symbol of hope and survival to the people of Watts. 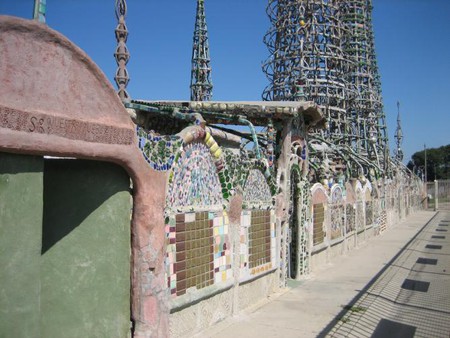 The towers changed hands once again when the committee gave it to the city of Los Angeles in 1975. In 1985, it was declared a California Historic Park and in 1990 a National Historic Landmark. Today the Los Angeles County Museum of Art oversees the daily care, maintenance, and future restoration of Watts Towers.

At the time, people did not understand what Rodia was doing, and he did not feel like he needed to explain himself. As he once said in his broken English, “Some of the people say what was he doing…some of the people think I was crazy…” He had a basic idea, and he went with it; he had a strong drive to create something amazing, and he did. Rodia created a beautiful work of art that in many ways is still a mystery. While there are a few other works attributed to Rodia, such as a tower in the yard of a Malibu home, he never produced anything else after he walked away from Watts Towers. He passed away in 1965. Many artists create art to make a living but not Sabato Rodia; he had no interest in earning money off his folk art masterpiece — he just wanted ‘to do something big.

Visitors wishing to see the park may take a guided tour, which is offered four days a week for a small fee, and are encouraged to visit the Watts Towers Arts Center next door, which provides art education to residents, as well as music programmes and exhibitions.