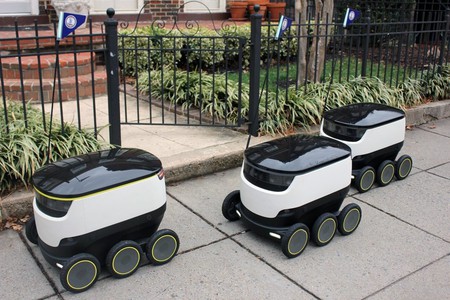 The city of San Francisco is cracking down on robots. City officials have voted to restrict the use of delivery robots, in an attempt to ensure sidewalks aren’t full of androids.

San Francisco is perhaps one of the most embracing cities in the world of new technology, so the crackdown on robots comes as something of a surprise. But the paranoia felt all the way around the world about employing robots to carry out everyday tasks appears to have seeped into a San Francisco Board of Supervisors meeting.

Delivery robots are fairly inoffensive. They use sensors to see the world around and them and carry food from a restaurant to a customer. As they’re not fully developed yet, a human has to walk around them with a controller, just in case they take a wrong turn or get stuck. Once the food reaches the customer, they enter a PIN to access their grub, and the robot goes back to the restaurant.

But the city, usually so eager to encourage technological change, has enforced some pretty strict rules on robot deliveries. Startups will now have to get permits to use their robots under supervision and only in particular zones, most of which have few people walking on the sidewalks. And even if they do apply for a permit, they can’t use the robots for actual deliveries, only for research purposes.

The city’s main objection to these robots is they could take up too much space on the sidewalk and potentially bang into people. “The business model is basically get as many robots out there to do deliveries and somebody in some office will monitor all these robots. So at that point you’re inviting potential collisions with people,” San Francisco Supervisor Norman Yee, who spearheaded the legislation, was quoted as saying by Wired.

In the future, delivery robots will also need to make a noise to warn people they are on the move, and will have to observe rights of way. They will be required to have headlights and proof of insurance, including automotive liability, general liability, and workers’ comp.

All this is going to make it difficult for some of the startups working in this space to make significant progress in San Francisco. But there are some cities where delivery robots can hit the streets unhindered. In March 2017, an Estonian company put 20 robot delivery units out on the streets of Washington DC. The Starship Technologies robots travel at around four miles per hour and wave red flags so pedestrians can see them coming.