The 10 Best Brunch Spots In The Misson District, San Francisco 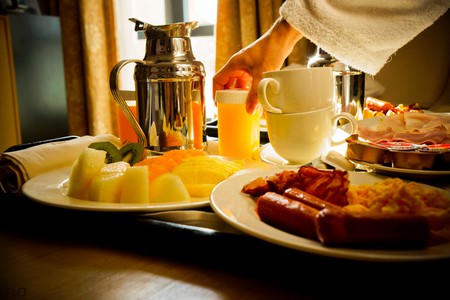 Head to San Francisco’s Mission district for a brilliant brunch, with its famous bottomless mimosas and farm fresh fare pulling in punters from across the city. Spanning trendy bakeries, dine-in cinemas, bowling alleys and historic soda fountains, brunch in the Mission is worth a pilgrimage. We update our guide to the best places to enjoy brunch in this San Francisco neighborhood. 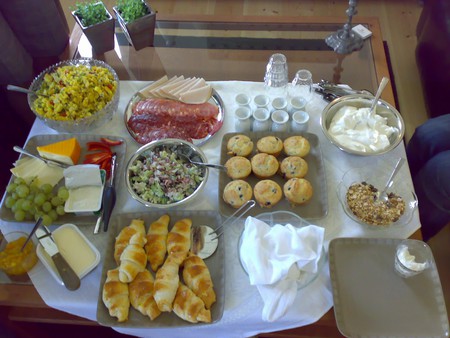 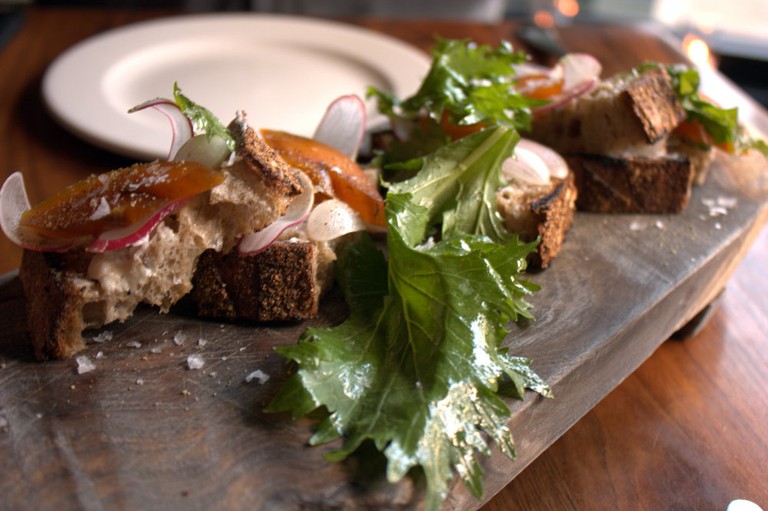 bar tartine bottarga, grilled bread, butter, radish | ©Krista
Bar Tartine is a refreshingly unusual yet nonetheless delicious option for weekend brunch in the Mission. True to its name, the restaurant’s bread counter is the building block for some of Bar Tartine’s brunch specialties, as well as the platform for the restaurant’s auxiliary sandwich arm which serves Danish style smørrebrød and tartine. An eclectic array of culinary influences is reflected in Bar Tartine’s offerings, with house pickled delicacies showing Hungarian gusto and salmon roe and lox-draped bread channelling Scandinavian sensibilities. Alongside a curated wine list and collection of draft and bottled beers, brunchers can sip on similarly creative boozy beverages, like chamomile infused rice spirit and geranium and candied beet varieties of mimosa. The best of Bar Tartine brunch can be taken home in the form of ‘bread to go’.
Open In Google Maps
561 Valencia Street, San Francisco, California, 94110, USA
+14154871600
Visit Website
Give us feedback

Fresh cups of exquisite house coffee are a consolation for those who brave the snaking line at Boogaloos for some of the Mission’s best brunch. With a kitchen producing food as quickly as the time it takes for new customers to arrive and sit down, it is clear that Boogaloos’ mandate is to serve as many hungry mission brunchers as possible. Boogaloos excels at the basics, with plantain cakes, tamarind sour cream, chorizo and even soy-rizo to add some neighbourhood flavour to the regular eggs and potatoes. Other vegan options include the grilled vegetable and polenta pancake, with the option to add vegan sausage on the side. The weekend menu brings several new spins on eggs benedict, offering versions heavy on avocado, grilled tomato and black forest ham. Brunchers can also ‘do the boogaloo’, starting with a base of scrambled eggs and adding some extra layers from ‘the playlist’ – in other words, the musical menu of add-ons.
Open In Google Maps
3296 22nd Street, Mission District, San Francisco, California, 94110, USA
+14158964611
Visit Website
Give us feedback

Ice Cream Parlour, Restaurant, Coffee Shop, American, $$$
Facebook
Email
Twitter
Pinterest
Copy link
Share
Map View
Central Kitchen is undoubtedly one of the more refined Sunday brunch establishments within the Mission. Quality of ingredients parallels culinary innovation, with a thorough list of local and organic partner farms providing everything from vegetables and eggs to honey and roasted coffee beans. Brunch booze risks never being the same again with specialties like the plum bellini garnished with hibiscus and ginger, or the beer float with black lager and vanilla ice cream. Central Kitchen’s menu is resiliently unconventional with decadent dishes like the medjool date sticky bun topped with walnuts, bacon and ricotta, or fried eggs served alongside roasted eggplant. For those who simply want to eat two brunches in one go, Central Kitchen has some particularly striking dishes with dual identities: French toast bread pudding adorned with plums and candied almonds, as well as fried chicken benedict accompanied with ham, hollandaise and a buttermilk biscuit.
Open In Google Maps
3000 20th Street, Mission District, San Francisco, California, 94110, USA
+14158267004
Visit Website
Give us feedback 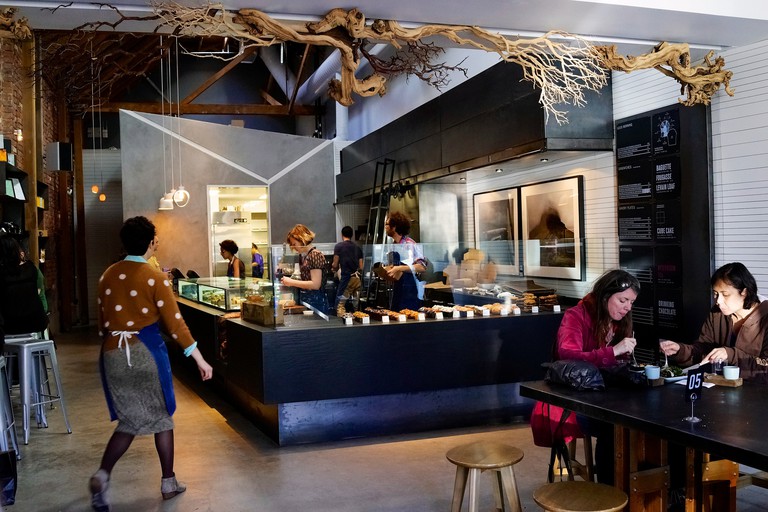 Craftsman & Wolves | ©Bit Boy
Craftsman and Wolves can only be described as a highly evolved bakery with its unparalleled and sophisticated patisserie offerings. A selection of buns, tarts, brownies, éclairs, financiers, croissants and cookies beckons brunchers and afternoon snackers alike with inventive creations like the banana, blackberry and coconut muffin, the curry cashew cookie or the savoury black fig and olive oil tart. A house specialty is a variation of Scotch egg baked and breaded with asiago, sausage and green onion, nicknamed ‘the rebel within’. Breakfast options include a granola and yoghurt parfait furnished with fruit and a seasonal quiche, while lunch selections include baguette tartines, chilled corn and avocado soup and a savoury tart topped with pistachio and stacked with pickled turnips and fromage blanc.
Open In Google Maps
746 Valencia Street, Mission District, San Francisco, California, 94110, USA
+14159137713
Visit Website
Give us feedback 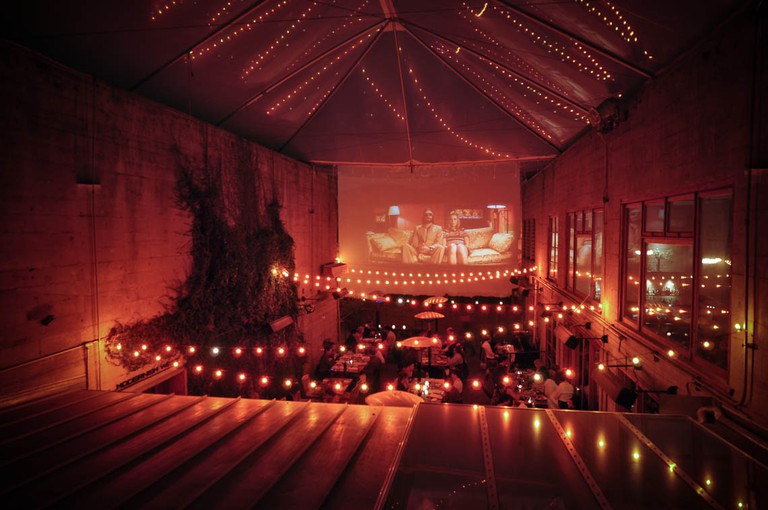 Foreign Cinema | ©ForeignCinema.com
Foreign Cinema boasts a dining experience which has widely been hailed as ‘quintessentially San Francisco’. As one might expect, Foreign Cinema is indeed a foreign cinema, with foreign films and independent films alike screened in a covered outdoor dining area, with seating also available indoors and along a semi-private mezzanine. With experience in the San Francisco restaurant scene that has been ‘fermenting’ for 20 years, Gayle Pirie and John Clark’s brunch menu shows their extensive experience. An impressive roster of oysters and other shellfish begin an impressive menu of brunch options with prices to match, yet creative dishes like the Persian omelet, Oaxacan style calamari and a non-industrial, organic take on pop tarts are great value and delicious.
Open In Google Maps
2534 Mission Street, Mission District, San Francisco, California, 94110, USA
+14156487600
Visit Website
Give us feedback 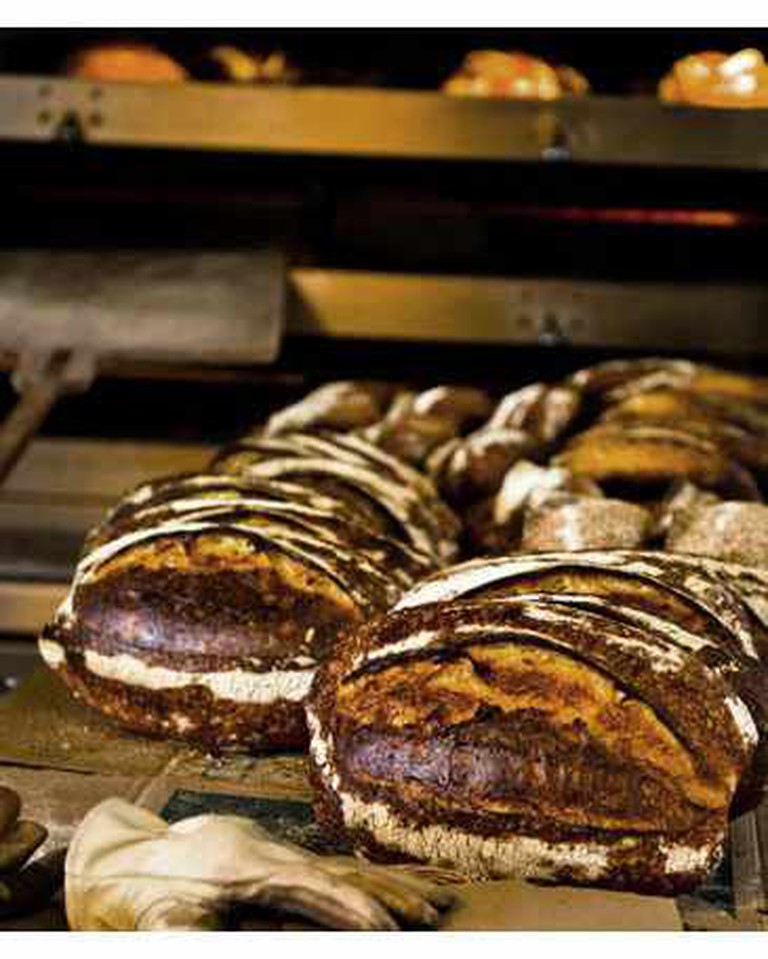 Baked Goods at Tartine | Courtesy Tartine
Standing proudly on the corner of 14th Street and Guerrero, Mission Beach Café is undeniably a pillar of brunch in San Francisco’s sunny Mission district. Mission Beach’s proclivity towards pastries shines through in the brunch-time quiche as well as the homemade English muffin sandwich stuffed with mushrooms and caramelised onions. Boasting a weekend brunch menu in addition to its weekday servings, Mission Beach is famous for original spins on classic brunch items like lavender-infused French toast with honey mascarpone and bourbon syrup, or the braised short rib served up next to a hash of sweet potato, apple and butternut squash. Local ingredients shine through in other unparalleled specialties like the crab benedict with hollandaise and orange reduction or the vegan scramble.
Open In Google Maps
198 Guerrero Street, Mission District, San Francisco, California, 94103, USA
Give us feedback 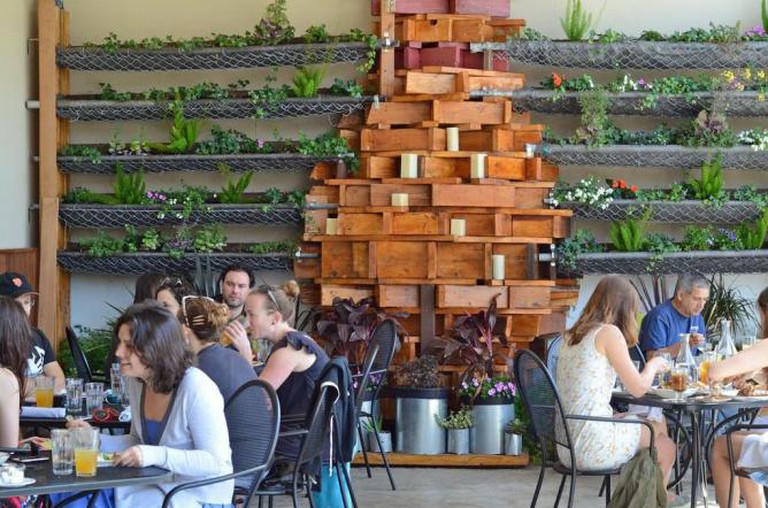 Mission Bowling Club | Photo courtesy of Mission Bowling Club
Mission Bowling is a strike when it comes to original brunch venues. Not only is weekend brunch at Mission Bowling one of the few acceptable occasions in life to bear a mimosa in one hand and a bowling ball in the other, but it is also the only time when the typically boozy bowling alley is open to minors and families. Alongside a crucial selection of morning cocktails from bloody Mary’s and shandy’s to sangria and the apple brandied orchard sour, savoury brunch dishes like the croque madame, chilaquiles, fried chicken and waffles and heirloom tomato benedict promise to lure anyone out of bed. Diners do not have to reserve a bowling lane to partake in the Mission Bowling’s famous Mission Burger on the outside patio with a side of green chili cheese fries.
Open In Google Maps
3176 17th Street, Mission District, San Francisco, California, 94110, USA
+14158632695
Visit Website
Give us feedback 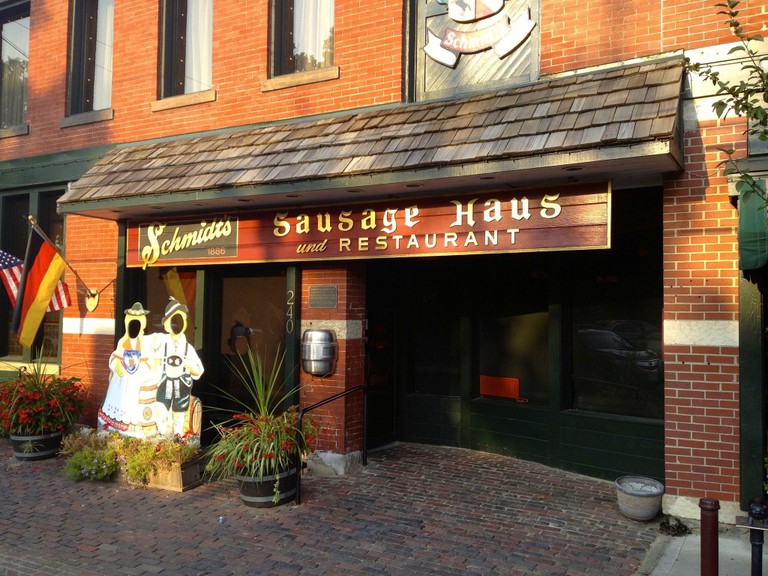 Schmidt's Sausage Haus | © Bob Hall
Weekend brunch takes on a delightfully Deutsch flavour at Schmidt’s, upsetting the status quo of eggs benedict and French toast with some hearty fare from the other side of the Rhine. Moving rich and savoury breakfasts in a less conventional direction, Schmidt’s brunch fare ranges from platters of marinated herring fillet and smoked trout to waffles with lingonberry cream and, of course, the best of the wurst. Although German fare might not be what you first expect on a Californian breakfast table, diners will quickly come to appreciate the natural deliciousness of German specialties. In the spirit of urban fusion cuisine, Schmidt’s even have their own schnitzeled take on the classic chicken and waffle.
Open In Google Maps
2400 Folsom Street, San Francisco, California, 94110, USA
+4154010200
Visit Website
Give us feedback 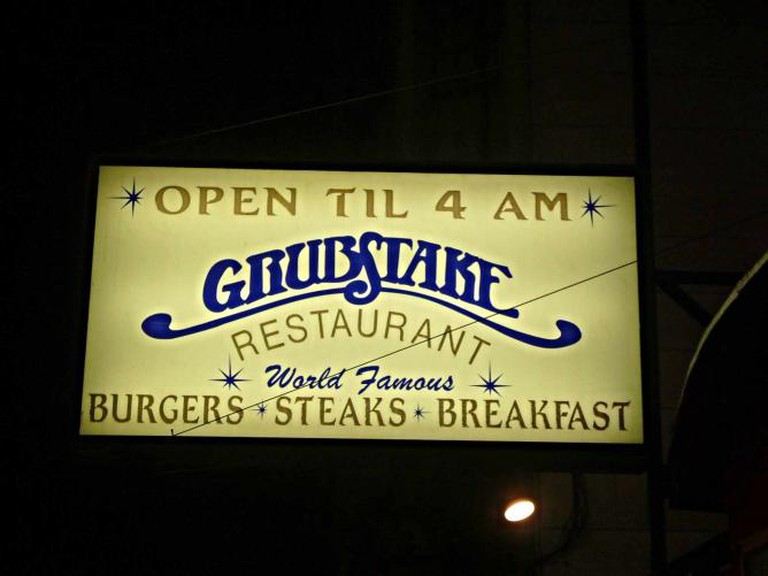 Grubstake | © shannonclark/flickr
Renowned for being San Francisco’s oldest ice cream parlour, St. Francis Fountain provides a welcome alternative to the trendy brunch scene with down to earth milkshakes, burgers and an undeniably hearty breakfast. Founded in 1918 by a Greek immigrant named James Christakes, St. Francis Fountain was handed down across three generations before being purchased by the current owners, who promptly renovated the dining room and expanded the kitchen. Fountain classics span root beer and Guinness floats, while more original milkshakes are made with espresso or soy. Banana splits and sundaes will satisfy even the most dire desert diners. Burgers, sandwiches, soups and salads stand alongside the usual breakfast suspects, with house specialties retaining an aura of mystery and comic relief with names like ‘nebulous potato thing’, ‘vegan thing’ and the ‘chef’s mess’.
By James Sawyer
Open In Google Maps
2801 24th Street, Mission District, San Francisco, California, 94110, USA
+14158264200
Visit Website
Give us feedback
Give us feedback