San Francisco may be home to world-famous music venues such as Davies Symphony Hall and The Warfield, but some of the best spots to catch music in San Francisco are completely free. Hosting performances of classical, jazz, world music and more, these 10 venues prove that great live music doesn’t have to cost a fortune—or anything at all. 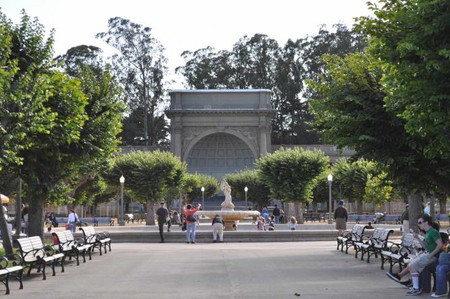 Formed in 1882, the Golden Gate Park Band is an iconic city institution as well as the subject of David W. Bandy’s book, Five Thousand Concerts in the Park. On Sundays from April to October, the band plays themed outdoor concerts at Spreckels Temple of Music, the elegant bowl structure in between the de Young Museum and the California Academy of Sciences. Upcoming programs will celebrate subjects ranging from Ukrainian music to the world of Disney; fans of patriotic songs should be sure to attend the band’s special Fourth of July concert. All concerts start at 1:00 p.m., and are conveniently located on the 44 Muni line. 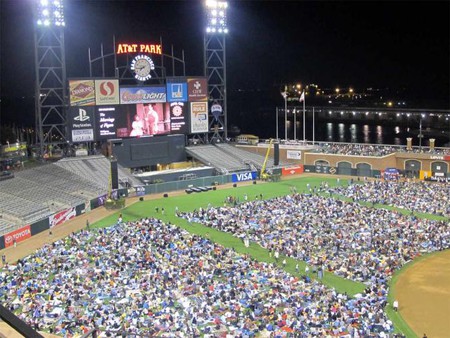 Opera at the Ballpark | Anita Hart

San Francisco Opera: At The Ballpark and At The Park

Going to the opera can be an expensive affair, but every year, the San Francisco Opera hosts two free events designed to draw opera connoisseurs and newcomers alike. In July, head to AT&T Park for the live opera simulcast from the War Memorial Opera House, complete with English subtitles and garlic fries for sale (this year’s production is Mozart’s comic opera, The Marriage of Figaro). Reserve your space in order to gain early admission to the park, as last year’s simulcast drew 26,000 people and the home plate area — the best place to view the high-definition scoreboard — tends to fill up quickly. AT&T Park is accessible by Caltrain and Muni lines 10, 30, 45, 47, N, and T.

Then in September, visit Golden Gate Park’s Sharon Meadow to watch an outdoor concert conducted by the San Francisco Opera’s esteemed Music Director, Nicola Luisotti. This program will consist of arias from a variety of recent and upcoming opera productions. 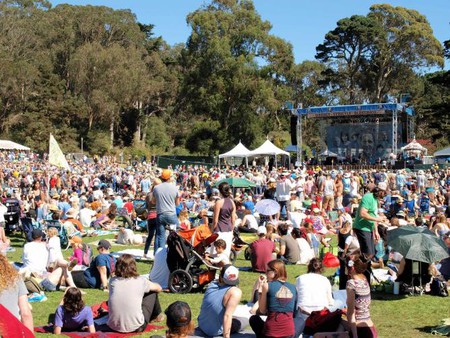 Return to Golden Gate Park in October for Hardly Strictly Bluegrass, the multistage festival featuring not only a range of bluegrass subgenres, but also indie and rock. Past participants have included bluegrass and folk icons Emmylou Harris, Joan Baez, and Steve Earle; indie bands Calexico and Bright Eyes, and even rapper MC Hammer. Stage-side spots are generally reserved for VIPs, so visibility can be compromised, but the fantastic array of food provides additional entertainment.

There’s something for everyone at the Stern Grove Festival, which hosts afternoon concerts on Sundays between June and August. This festival season — the 78th — includes a smorgasbord of world music artists (top-selling Hawaiian vocalist Amy Hānaiali’i, the Pacific Mambo Orchestra), indie worldbeat musician tUnE-yArDs, and both the San Francisco Symphony and San Francisco Ballet. A small selection of food is for sale, and picnicking is encouraged (alcohol is permitted, but not sold). Get to the park early to reserve your space, but make sure to leave behind any high-backed chairs and large shade structures, which will block other people’s views. Stern Grove is accessible by Muni lines 23, 28, K, and M. 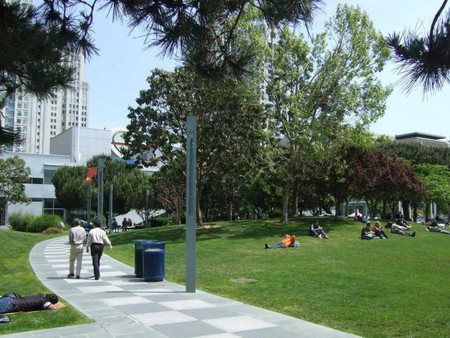 From the spring through the fall, Yerba Buena Gardens Festival hosts an astonishing range of free events, encompassing not only classical, jazz, and world music, but also dance, theater, and special children’s programs. Spread out a picnic blanket this summer and watch performances by the Okinawan Folk Ensemble, the Venezuelan Music Project, and the Merola Opera Program. Most events occur Thursdays through Sundays, but there are occasional programs on Tuesdays as well — this is a venue that never sleeps. Yerba Buena is situated within blocks of Powell and Montgomery Stations, and is also accessible by Muni lines 8, 14, 30, and 45.

The mission of People in Plazas is to revitalize public spaces through the arts. From July through September, the organization produces over 170 outdoor concerts in public spaces across Civic Center, the Financial District, SOMA, and the Castro. These near-daily performances feature virtually every genre of music, with an emphasis on jazz, blues, and the music of Central America. 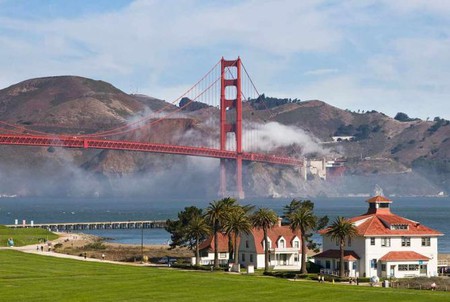 The Presidio | Will Elder

The Presidio Officers’ Club, which hosts concerts of classical, jazz, and international music, is the perfect place to spend a mellow Friday evening. Upcoming Presidio Sessions events include performances of early music by Agave Baroque, crossover by Quartet San Francisco, and Latin Jazz by superstar John Santos. The intimate space encourages interaction between performers and audience members, many of whom visit the nearby bar during intermission. It’s a lengthy trip to the Presidio by Muni lines 28, 29, and 43, but fortunately, a free shuttle bus runs from downtown on weekdays between 9:30 a.m. and 4:00 p.m., and on weekends between 10:00 a.m. and 7:30 p.m. Arrive well in advance of the concert in order to claim good seats.

Hosted by San Francisco State University’s College of Liberal & Creative Arts, the under-publicized Morrison Artists Series presents recitals by renowned chamber groups. The 2014–15 season included concerts and master classes by the Juilliard String Quartet, ZOFO Piano Duet, and SF State’s own quartet-in-residence, the Alexander String Quartet, among other groups. Most events take place in the spacious Knuth Hall, which is renowned for its excellent acoustics. Although these performances are free, you may need to reserve a ticket in advance; sign up for the Morrison Artists email list to receive concert reminders. SFSU is accessible by Muni lines 18, 28, 29, 57, and M.

Although their orchestra and opera concerts generally cost around $15 to $20, San Francisco Conservatory of Music hosts a variety of free classical music events — including student, faculty, and ensemble recitals, as well as appearances by guest artists — between September and May. Highlights of the 2014–15 school year included free master classes by mezzo-soprano Susan Graham and pianists Richard Goode and Craig Sheppard. It’s difficult to park in the Hayes Valley, but SFCM is just one block from Van Ness Station, and is within minutes of Civic Center BART.

Every Tuesday at 12:30, Old St. Mary’s Cathedral becomes a popular lunch break destination for people who work in the Financial District. At these Noontime Concerts, local chamber groups and soloists perform short recitals of music ranging from virtuosic piano works to the serenades of Mozart. The high caliber of musicians makes the suggested donation of $5 well worth it. Old St. Mary’s Cathedral is a brief walk from Powell and Montgomery Stations, and is also accessible by MUNI lines 1, 15, and 30.