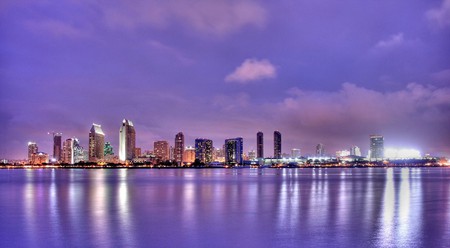 Home to yellow and blue beaches, Spanish-style architecture, and a variety of ethnically-diverse cuisine, San Diego is full of Instagram bait. Whether you live in the Southern California city or plan to visit, these eight Instagrammers provide unique perspectives on the city — from epic surf shots to cocktail close-ups and fitness inspiration.

Internationally-renowned surf and ocean photographer Aaron Chang calls San Diego home. Chang spent 25 years as a senior photographer at Surfing magazine, traveling the world for his portfolio of water shots. Chang’s Instagram presence varies from images of surfers and swells in San Diego to coastal life from around the globe. He also posts short videos explaining his photography methods to followers, describing the work behind the Insta (hint: sometimes it requires standing on a picnic table for an entire afternoon).

I’m happy to introduce my new photo, Swami’s Reef. Click ‘Learn More’ to watch my story behind this new shot.

If looking at images of waves makes you thirsty, check out Efren Agustin’s “drinkstagram” for pictures of the city’s finest cocktails. A self-professed foodie, Agustin took up a fascination for the drink-making craft. In 2016, Agustin decided to dedicate his Instagram feed to his most Insta-worthy craft cocktails. Now, the Instagrammer is a member of the local chapter of the United States Bartenders’ Guild and creates content for spirit brands. Follow him to see creative cocktails from bars around San Diego.

When Joey Guzzino was 14, he started the San Diego Photos account to showcase images of life around the city. But, when it came time for him to move out of California for college, Guzzino sought to preserve his account. So, he masterminded the #MySDPhoto hashtag with the aim of featuring photos taken by both tourists and locals in San Diego. Now, Guzzino has a team of ‘grammers helping him trawl through the locally-popular hashtag on a daily basis, curating a series of “photos that capture traditional scenes of San Diego in new and unique lights.”

For a different perspective of San Diego, check out the tagged photographers above⬆️

From shrimp tacos to latte art, San Diego Food Girl’s reputation comes from photographing the city’s best eats. For the past two years, the account has dedicated itself to showcasing the most artistic local cuisines and plates — drinks included. And, her captions provide all the necessary details on where to indulge and capture your own take on the San Diego dish.

Professional surf and landscape photographer Will Holder has a talent for capturing coastal life and the allure of the water. “I love to take photos in the ocean and explore angles and colors that expose the immense beauty in the seemingly ordinary,” he states. Followers can swim vicariously off San Diego’s shores through Holder’s Instagram stream.

When she’s not traveling around the world, luxury travel writer Katie Dillon is based in La Jolla. Her account features the wanderlust and natural givings of San Diego, including her favorite photo spots: the sea lions at La Jolla Cove, Scripps Pier, and the Balboa Park architecture. As her handle suggests, Dillon’s kids often make appearances in her shots.

Coach and marathon runner, Kate Buntenbach is known to shoot her favorite outdoor running spots. Originally from Chicago, Butenbach states that San Diego is a paradise for endurance athletes and surfers. “I don’t plan to ever leave this little beach town bubble,” she says. From Cardiff-by-the-Sea to Balboa Park, you can catch her running across San Diego.

How can you not be happy in a world with oceans, sunsets and endorphins? 🌏🌊☀️ (This picture is clearly not from today as southern CA is in the midst of "the storm of the century." 😂☔️) #republicofencinitas #runhappy #neverstopexploring #thesweatlife #girlgetoutside #iamwellandgood