2 Earthquakes That Changed the Course of SF History Forever

San Francisco sits on the edge of the Pacific Rim, a section of the world notorious for seismic activity. Every year, dozens of earthquakes shake the city’s foundations. Most go unnoticed, and the few that do barely register to seasoned San Franciscans. However, two earthquakes were so dramatic in magnitude that they helped transform the city into what it is today: the 1906 earthquake and the 1989 Loma Prieta. 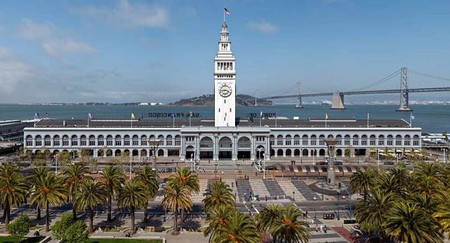 The Great San Francisco Earthquake of 1906

The 1906 earthquake began at 5:12 am on April 18th. The epicenter of the 7.8 Richter magnitude quake was about two miles off the coast of SF, just northwest of the Golden Gate. 7.8 is a rough estimate of the quake’s magnitude, considering it predates the Richter scale by three decades. Reports say the shaking could be felt as far away as Oregon, Los Angeles, and Nevada. While the quake was powerful, it was its accompanying fires that demolished a good 80-90% of the city. As a result of busted gas lines and water manes, fires raged in the city for four days straight.

The death toll of the earthquake is given a conservative estimate of 3,000 lives. Somewhere between 227,000 and 300,000 people were left homeless from a population of about 410,000. Refugee camps were set up in Golden Gate Park for those unable to leave the city. While most had left the camps by 1907, the final refugee camp closed on June 30th 1908, more than two years after the earthquake had shattered the earth. 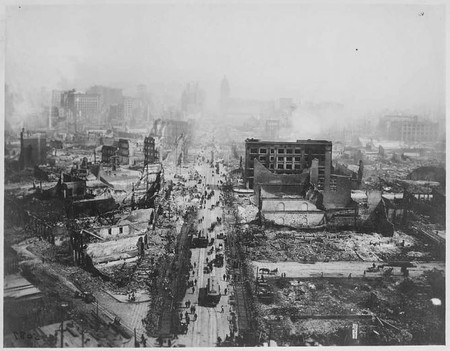 Ruins of San Francisco taken from the Ferry Building | © WikiCommons

In the face of one of the worst natural disasters to ever hit the nation, it almost seemed like the perfect time to implement world-famous urban planner Daniel Burnham’s wild designs for the city. Almost. While many plans were scrapped, such as a giant park stretching from Twin Peaks to Lake Merced, some were accepted. Eventually, wider city streets, a neoclassical Civic Center, and a subway under Market Street were implemented. Interestingly, because the records at City Hall were burned in the fire, thousands of Chinese immigrants were able to exploit a loophole into the country during a time that was, historically, not kind to them. In addition, many folks saw this as an opportunity to begin cleaning up the Barbary Coast, a wretched hive of scum and villainy that was the origin of the phrase “getting Shanghaid.” The Coast had been the red light district since the Gold Rush, and this was a new era for the City by the Bay.

Golden Hydrant, a water hydrant located at the southwest corner of Dolores Park, remained one of the few working during the earthquake. This is the hydrant that saved the Mission. To commemorate this brave and valorous water spout, every year on the anniversary of the earthquake, it is painted gold in remembrance. 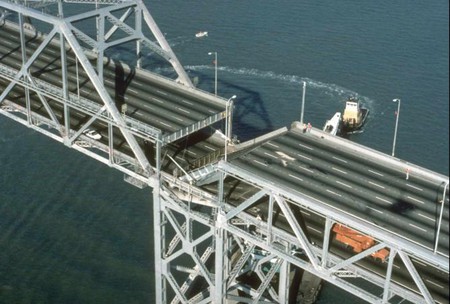 The 1989 Loma Prieta earthquake occurred at 5:04 pm on October 17th. While many like to believe this was caused by the A’s vs. Giants World Series happening at the time, the epicenter was in fact about 10 miles northeast of Santa Cruz at a magnitude of roughly 6.9.

The Marina district was hit the hardest as a result of soil liquefaction. Much of the land beneath the Marina is landfill from the the 1906 quake. Most of the Bay Area was affected to some degree. As many as 1.4 million people lost electricity. As in the previous earthquake, gas lines and water manes were wrecked, but fire damage was much more contained this time. The Bay Bridge was hit hard as well, with part of the top collapsing onto the level beneath. Fortunately, because of the World Series, much of the rush hour traffic was dispersed elsewhere. A total of 63 people lost their lives from the earthquake, with more than 3,000 people injured in total.

The earthquake demonstrated how outdated and unprepared many of the highway systems and bridges were in the face of a seismic event. The Bay Bridge has received significant negative attention in this regard. In addition, the Embarcadero Freeway in front of the Ferry Building was finally voted to be demolished after the earthquake’s damages. Similar to the Barbary Coast, it was an opportunity to change an unpleasant part of the city into something better. It is doubtful that the Embarcadero would be as beautiful or people-friendly with that freeway still blocking the waterfront.

The age and cost of maintenance caused many to question the necessity of the Fireboat – Phoenix. Mayor Diane Feinstein fought to keep the boat around despite others claiming it was detriment to the city’s budget. 21 months later came the Phoenix’s time to shine, as the earthquake had disrupted the city’s water supplies, and the Phoenix was suddenly needed to fight the blazes in the Marina. Today, there are two fireboats in the bay.

Justice Boles is the future winner of World’s Handsomest Man and can be reached via Facebook, Twitter, or telepathy.