Rock And Roller Derby: Invasion Of The L.A. Derby Dolls

Move over, skateboards — there’s a new sport on four wheels dominating SoCal. If you’ve never heard of roller derby (or seen the Drew Barrymore-directed Whip It), now is the perfect time to Google it. Better yet, head on over to the Dolloseum in El Sereno to catch a bout and experience this vibrant sport for yourself. 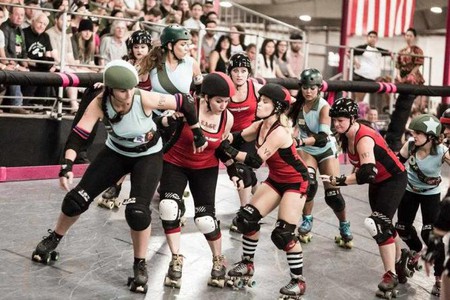 It was at one of these bouts that Stephanie Gomez first fell in love with roller derby. Even as an audience member, the enthusiasm from the crowd was easily felt. “I loved the combination of rough and tough girls, of being really tough but also really feminine,” she said. About a year after checking out a game as research for a UCLA class, Gomez decided to try her hand (or foot) at skating. Enter The Doll Factory, home of the L.A. Derby Dolls until April of this year.

The Doll Factory was special for two reasons, one of which was having lasted so long as a permanent home for the team. Gomez said being able to maintain the same space is hard to do since it’s not often economically sustainable.

Roller derby as a sport is virtually entirely volunteer-driven, with the L.A. Derby Dolls required to fulfill a certain amount of volunteer hours as part of their membership. These team members and other volunteers are at the heart of the second accomplishment for this team — building the unique banked track on their own.

Roller derby can be played on either a flat track or a banked track, the latter of which is harder to come by and more of a challenge. Slightly elevated, the banked track offers the skaters more momentum as they round the track. The primary goal of roller derby is to lap the opposite team to score points, so a banked track provides more acceleration.

The jammer is the player who surpasses the other members in the ‘pack’ in order to score while the other players, known as blockers or pivots, do what they can to prevent their jammer from being blocked by the opponents. Since speed is a huge factor, an important technique is the whip; in this move, either the blocker or pivot swing the jammer forward so she can score.

Gomez said her favorite position is pivot since it involves really knowing the team and serving as a captain to help the team score during that ‘jam’ or round.

“I think of it as playing chess, calling the shots for that jam and being aware of all the players.” 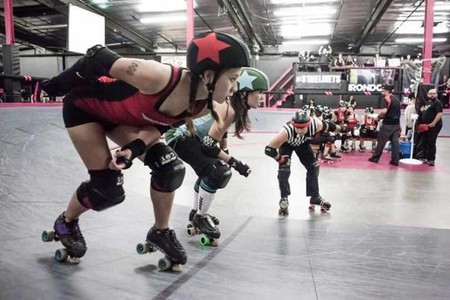 While the birth of roller derby in the 70s focused heavily on the entertainment aspect (think tutus and fishnet tights), it has evolved into concentrating more on the athleticism of the sport. Weekly practices involve cardio and exercises off the track for strength and endurance training as well as running partner drills.

Many team members come from different sporting backgrounds like marathon running or professional ice skating. Gomez, however, emphasizes that roller derby is its own creation.

“This is definitely a sport that you learn by doing.”

For this reason, the best practice is actually running jams while other teams observe and provide advice. Being such an intense contact sport, Gomez said working with other people is difficult and takes some effort to adapt.

This new sporty perspective doesn’t mean, however, that the colorful history is forgotten. Creative derby names are an integral part of of the sport, with Gomez going by GuadalaHorror — an homage to her Latin ancestry with a twist on the Mexican city of Guadalajara. Audience members and vendors selling derby merchandise work hard to keep the derby spirit alive.

“While skaters on the track are wearing more athletic gear, (the skater volunteers) will dress up and do the fun stuff,” she said. “There’s a nod to that showmanship of previous times, but it’s turning into a more serious sport.”

Earlier this year, The Doll Factory moved from Filipino Town to a location in El Sereno renamed ‘The Dollosseum.’ After taking a break due to personal reasons and now skating with a league in the San Fernando Valley, Gomez said she’s excited to see an upcoming bout between her current team and the L.A. Derby Dolls on August 23.

“You can’t stay away for too long.”