Until recently, when looking for a vibrant spot in San Francisco, people looked no further than Yoshi’s jazz club. Located in the Fillmore District, it housed many famous musicians from all over the world. Yoshi’s in San Francisco closed its doors in 2014 but Yoshi’s Oakland is still thriving with nightly shows. With its intimate setting and live musical acts, it’s a perfect place for a date, with great options for dinner. We find out more about Oakland and remember Yoshi’s heyday in the city by the Bay. 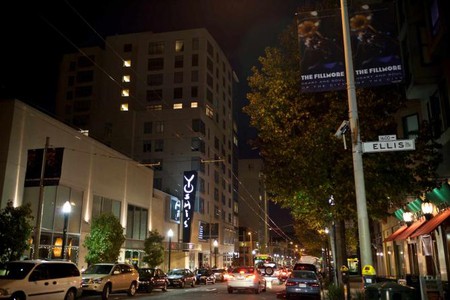 From the radiant stage lighting to the red velvet stage curtains, from the ambiance to the musical performances, the audience is in for a unique experience at Yoshi’s. When that first musical note is played inside, a sense of charm exudes, enhanced by the unrivalled acoustics. Any seat in the house is great – whether it’s on the floor level or second level, where the audience has a perfect aerial view of the stage. Those who really want to observe how every musician plays their instrument – such as the keyboards, drums or the guitar – should plump for the upper deck. The music travels far from the ostensibly small stage, allowing the crowd to really get into the show and feel like a part of the band. Sit back and allow servers to provide you with Japanese food or delicious alcoholic drinks that truly furnish any performance. 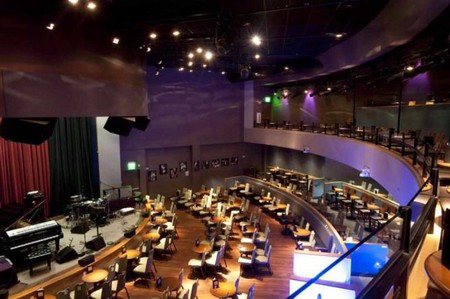 It’s even better when Yoshi’s has an open dance floor night. Music fills the air and it’s hard to resist getting on your feet and joining in with the fun. The open dance floor provides a charmingly old-school vibe, with people partying in a sea of colour. When the music slows down, Yoshi’s provides a unique yet intimate setting that will bring the romance out for any couple looking to get to know each other better with the remainder of the evening. 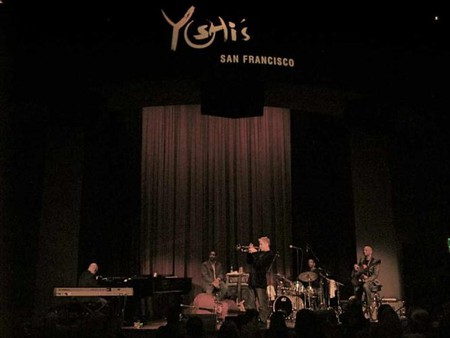 From the radiant stage lighting, red velvet stage curtains and the musical performance, the audience is in for a unique experience at Yoshi’s. When that first musical note is played inside, a sense of charm and glee that is not found anywhere else but here at Yoshi’s. The acoustic setting is enjoyable to say the least. Any seat in the house is great whether it’s on the floor level or second level, where the audience has a perfect arial top view of the stage. There really is not a bad seat in the house. Those who really want to observe how every musician plays their instruments such as the keyboards, drums or the guitar, will enjoy the upper deck. From its small stage, the music travels from the floor up into the second level to the crowd, that fascinates with waves of music. The crowd really gets into the show and everyone feels like they are a part of the band especially when seated next to the stage.

There are also servers that attend to patrons needs that serve Japanese food or alcoholic drinks during a performance.It’s even better when Yoshi’s has an open dance floor night. Music fills the air and it’s hard to resist sitting the entire show when more of its funky acts perform. Those in attendance who would like to get up and dance can do so during these nights. With an open dance floor, it really has an old school vibe when people are dancing and partying until they are soaking wet in sweat in their best outfits to upbeat music. Even when the music slows down, Yoshi’s has a very intimate setting that will bring the romance out in any couple for the remainder of the evening. Yoshi’s has the best sounding venue with music that feels like it surrounds the club and hits the inner soul. The overall sound of the music here has an amazing feeling with the bands grooves playing perfectly integrated with Yoshi’s superb sounding venue.

The music reverberates off the walls into the crowd, stimulating them to thrive and live up the night. The audience together has their eyes glued to the stage in ah from seeing what real musicianship is all about. This appreciation is evident with everybody at a concert when they leave the club with a smile on their face from seeing a musical journey.

Across the bay, Oakland Yoshi’s has the same charm as the San Francisco location. The one in Oakland is a little smaller in comparison to the San Francisco location, but is still a place worth visiting. Yoshi’s in San Francisco closed down and was renamed The Addition from new owners of the club. Even under new ownership, Yoshi’s aka The Addition, closed down earlier this year in 2015. It’s a shame to lose a great club but at least everyone can appreciate what a unique place it was to listen and watch musicians perform. A classy club like Yoshi’s will be missed in the city.

Daniel is an old soul with a love for funky old school music. Let’s go Oakland!