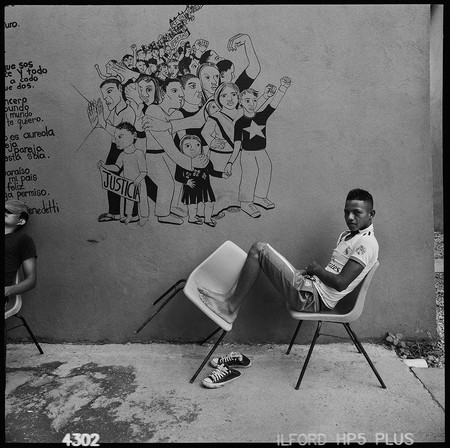 Tenosique, Mexico. A resident of La 72 shelter waits for mealtime in front of one of the many murals painted by volunteers and residents. The painting of a group of marchers demanding justice and freedom sits alongside a poem by Mario Bendetti, a Uruguayan writer forced to flee his country after a military coup in 1973. |© Graciela Iturbide, 2015

According to the UN Refugee Agency, the number of displaced people has reached 65.3 million globally. In a timely exhibition, the Annenberg Space for Photography partnered with the UN to produce Refugee, an exhibit that showcased five photographers’ work who portray the multitude of refugee experiences worldwide. One of those photographers is Graciela Iturbide, whose work takes viewers to her native Mexico, as well as Colombia, where migrant workers and internally displaced indigenous people struggle to survive in precarious conditions. 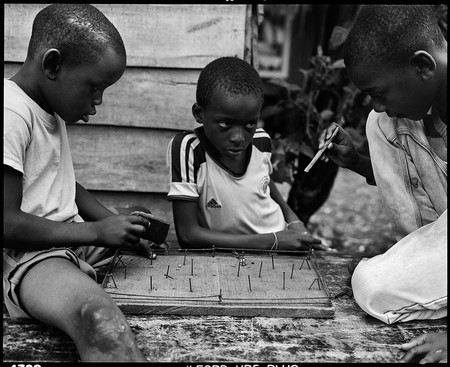 Graciela Iturbide 2015 Buenaventura, Colombia Children in Puente Nayero play an improvised game of table football. The success of the Puente Nayero Humanitarian Space has encouraged residents on the neighboring street of Punta Icaco to begin organizing to create their own humanitarian space.

Since the early 1970s, Iturbide’s work has brought her into intimate contact with various indigenous populations. In the past, she’s explored the lives and lifestyles of the Seri Indians in the Sonora Desert and then the Juchitán people in Oaxaca. She’s photographed Latino communities in East Los Angeles as well, as part of the photo-book project A Day in the Life of America.

Her work has long been lauded as injecting a magical realism or poetry into everyday life and that is partially the artist’s intention – as she recently told the BBC, ‘My intention is to look at life as if it were part of poetry.’ At the same time, Iturbide considers all photography to be documentary, calling the camera ‘a pretext to know the world.’ 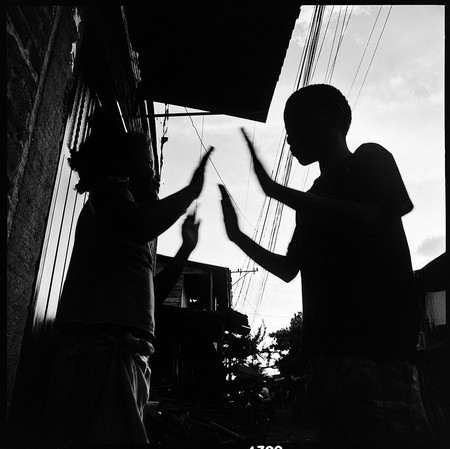 Graciela Iturbide 2015 Buenaventura, Colombia Children play on the street in the Puente Nayero Humanitarian Space. Although violence within the Humanitarian Space has declined dramatically, members of the community still face risk when they step outside the perimeter to attend work or school.

The works on display in Refugee strike the viewer in a more unfiltered documentary style. Through the photographer’s signature black-and-white images, viewers are granted a familiar intimacy with the particulars of these peoples’ plight – displaced children in Colombia scratch together improvised games or play in streets guarded only by a semblance of security in a makeshift humanitarian space.

In other photographs, Iturbide takes viewers to a Mexican shelter run by volunteer community members. Migrants from El Salvador and Honduras wait for meal times against the larger, longer waiting game of getting granted asylum; some fall in love, some seek work as life goes on within the shelter, whose walls are covered in murals by residents past, memorializing acts of violence against migrants, or histories of defiance. ‘To not have a country, to not have an identity, it’s like losing your soul,’ the photographer says in the exhibition’s accompanying film, which documents the experiences of Iturbide and the other featured photographers in the field. 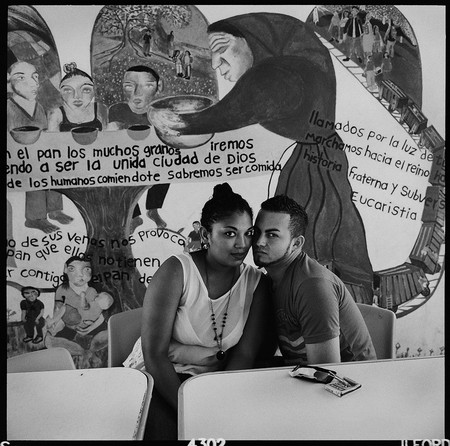 Graciela Iturbide 2015 Tenosique, Mexico This young couple from Honduras met in La 72 shelter and fell in love. During the nearly three months they have been at La 72, they have applied and been approved for refugee status. They are ready to start a new life in Mexico.

Los Angeles, where the show has been on view, has a refugee crisis of its own. In the past year, the homeless population has increased to 47,000 people in LA county, two thirds of which live in improvised shelters and shantytowns on the city streets, The LA Times reports. At an artist talk earlier this year at the Annenberg, Iturbide explained the impact civil society can have when we turn our attention to the issues. ‘It’s up to us,’ she said.

As one of the most important and influential Latin American photographers of her generation, Iturbide shows no signs of stopping. Her extraction of poetic from the everyday is perhaps exactly the perspective shift necessary to inspire action. 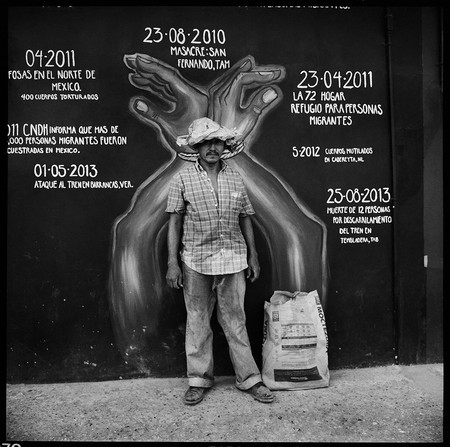 Graciela Iturbide 2015 Tenosique, Mexico This refugee is building a roof over La 72 shelter's playground. The mural behind him lists some of the worst acts of violence against refugees and migrants in Mexico, including the 2010 San Fernando massacre.
Give us feedback