Peek Into Savernack Street, A Peephole Gallery In SF 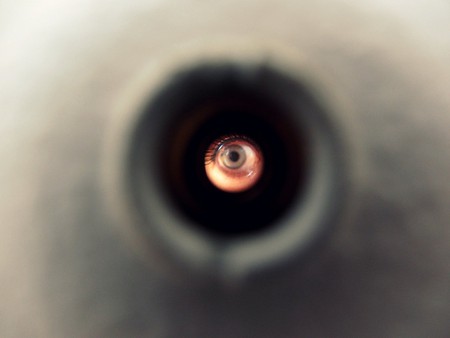 Every day, San Franciscans walk by the city’s smallest art gallery without knowing it. Savernack Street, a gallery that can only be seen through a peephole, is hidden in plain sight on 24th Street in the Mission district. Stop by to spice up your day with a little locals’ tourism.

Finally found this peep hole gallery on the street

Savernack Street, named after a road in London, was founded in 2013 by artist and curator Carrie Sinclair Katz. Katz had recently graduated with an MFA from San Francisco Art Institute. The tiny gallery was inspired by her struggle to break into – and afford to live in – the San Francisco art community. Katz tells City Lab, ‘[As a post-grad artist], you’re on the outside looking in a lot. I wanted to create a physical representation of that. Historically, there’s always the reality of artists struggling financially, and it’s especially hard with the current lack of funding for the arts in this country… I wanted to start a gallery, but all I could afford is something that you can’t walk in.’ The size of the gallery comments not only on the difficulty of affording life as an artist but also the lack of affordability in San Francisco, which has been named the most expensive city to rent in by a number of publications over the past few years.

The coolest gallery I ever been #savernackstreet

Luckily for Katz and the voyeurs of San Francisco, Savernack Street is backed by the Alternative Exposure grant program, which prides itself on supporting ‘the independent, self-organized work of artists and small groups that play a critical and significant role within the San Francisco Bay Area arts community.’ The program, which was founded in 2007 in partnership with the Andy Warhol Foundation for the Visual Arts, is now in its ninth round of funding, having provided $563,000 to 151 projects.

So far, Savernack Street has featured exhibits by the likes of Peggy Ingalls, Jennifer Locke, Lee Hunter, Juan Fontanive, and Carissa Potter, and Katz plans to host the works of Michael Ryan Noble, Sesh Mudumbai, Stephanie Syjuco, and Silvina Arismendi in the future. The gallery has been known to attract visitors from all around the city, who line up to take a peek into the exhibit of the month. The project has already inspired copycat projects, like the Peephole Cinema situated about a mile west of Savernack Street on Orange Alley. Katz has already begun work on new gallery projects, too, including a gallery even smaller than Savernack Street – a series of exhibits called Station Gallery, located inside of a wristwatch.