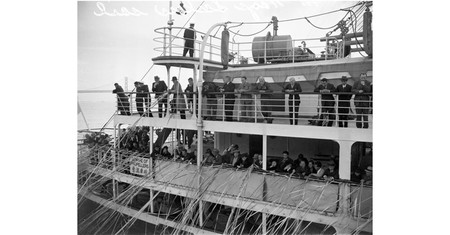 Angel Island is the second-largest island in the San Francisco Bay area. What a lot of people don’t know is that, in 1940, the island became “home” to 512 Germans. They had been aboard the SS Columbus, a German luxury liner that was setting out on a cruise right as World War II commenced.

The Columbus departed from New York on August 19, 1939, with its Nazi flag flying above. It was one of the largest and fastest luxury ships at the time, and among the first to have an outdoor swimming pool. Unaware that war would be declared in just a couple of weeks, the itinerary included a 12-day cruise to the West Indies. However, when the ship arrived in Martinique under the looming shadow of war, the German crew and passengers were not allowed to disembark.

They turned around to go back to New York, but the captain received a message that war was imminent and that the ship was not to enter a US port under any circumstances. They were to return to Germany, if possible; otherwise, they were ordered to head to a neutral port. The captain sailed to Havana, Cuba, dropped off some American passengers, and then fled to Veracruz, Mexico. It was one of many German ships stuck at a neutral port, unable to go home due to the threat of being captured by Allied ships. 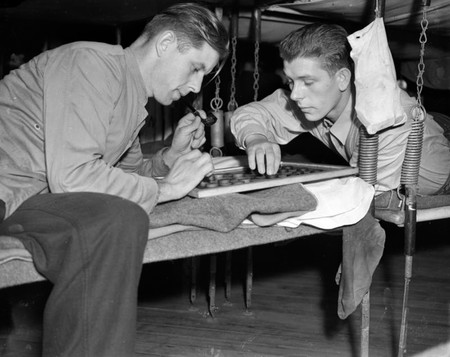 In November, the Columbus was ordered to attempt a blockade run to Germany. They painted the ship military gray and left port on December 14, 1939. Five days later, US warships of the “Neutrality Patrol” broadcast the ship’s position 400 miles (644 kilometers) off the coast of Virginia, and a British warship ordered it to stop. Rather than surrender the luxury liner to the British, Hitler ordered the crew to scuttle it, and as she burned and sank, the American ship Tuscaloosa picked up the remaining crew, all of whom were sent to be quarantined on Ellis Island.

The problem now was that the US, which had not yet entered the war, had technically onboarded the men as “guests of the United States government,” which meant that they were legally allowed 60 days of freedom in port before being deported to Germany. But the US government quickly realized that there was no way Britain would allow these experienced sailors to return home to help the German navy. They decided to avoid the British ships on the East Coast altogether by sending 512 members of the crew who were of military age on a train to San Francisco, where a Japanese ship would transport them home via the Pacific Ocean.

Trapped in limbo on Angel Island

The British, however, were not having it, and they set up three Allied warships outside the Golden Gate. Unsurprisingly, when the Japanese saw the ships, they backed out. With their allies now departed, the Germans found themselves stranded without a way back. And so all of the men were sent to Angel Island, the only local place with enough room to house them.

Technically, the German sailors weren’t POWs and, at first, were told their stay would be brief – two weeks at most. However, there were no ships to take them back to Europe. And even though they were neither quarantined nor immigrated, they were stuck on Angel Island, which – despite views of the water and the Golden Gate Bridge – was a somewhat ominous location.

Angel Island has a daunting history. Due to the threat of bubonic plague, a Quarantine Station – where ships from foreign countries were fumigated, and immigrants thought to have the disease were isolated – opened here in 1891. Later, in its most disturbing chapter from 1910 to 1940, tens of thousands of Chinese and Japanese immigrants were detained on the island under oppressive and unsanitary conditions. Now, the German men were being housed in the same conditions; they slept on cramped tri-level bunks and were locked in at night, without access to toilets. 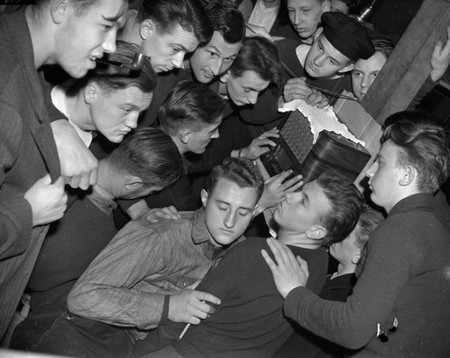 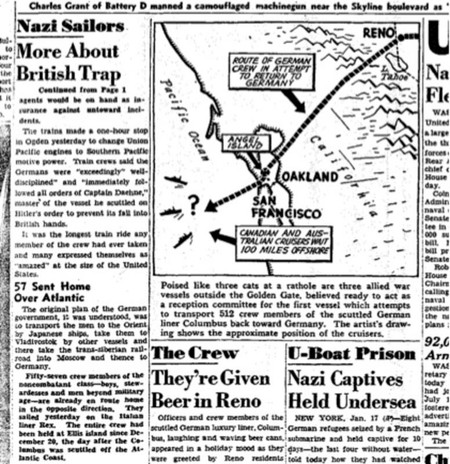 Despite being somewhat quarantined, the men were allowed to roam the island freely and even go ashore to San Francisco. But when a fire in the main administration building forced the immigration facility to relocate, their stay at Angel Island ended. The sailors were sent to an internment camp in New Mexico, where they set up shops, built a soccer field, tennis courts and a swimming pool, and had relative freedom – until the US entered the war in 1941 and the camp almost immediately transformed into a prison.

The German sailors continued to think that their stay in the US would soon end and that they’d be on their way to Germany. However, they lived at that internment camp until the end of the war in 1945 when they could finally go home – six years and two weeks after their ocean liner departed for the West Indies on a luxury cruise. 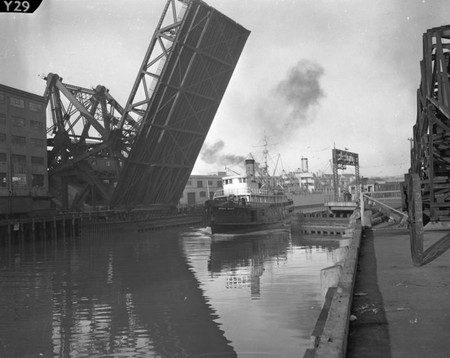 The German crew members were moved from Angel Island to Fort Stanton, New Mexico, in January 1941 | | © San Francisco Chronicle / Polaris
Give us feedback