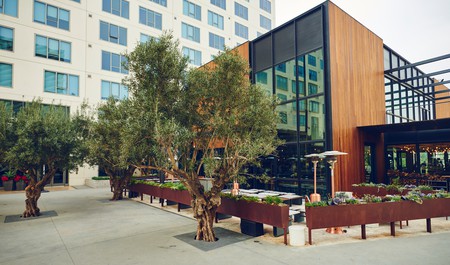 Nestled between The Broad museum and The Emerson, a luxury rental apartment complex, sits Otium. Chef Timothy Hollingsworth heads the contemporary restaurant, which had a soft opening serving lunch and brunch in November 2015, followed by a full opening with dinner service in December. Within a few short months, the restaurant, which serves New American cuisine, has taken Downtown Los Angeles by storm.

Otium is designed to be a social restaurant, and derives its name from Latin, meaning to emphasize a place where time can be spent on leisurely communal activities. It has an open kitchen that gracefully merges the indoor and outdoor spaces of the restaurant. Drawing inspiration from the 100-year-old olive trees planted in The Broad’s adjacent plaza, a quaint and picturesque small grassy area in LA’s bustling Downtown, Otium utilizes rustic cooking methods with wood fire and sustainable ingredients grown in the garden on the restaurant’s mezzanine. 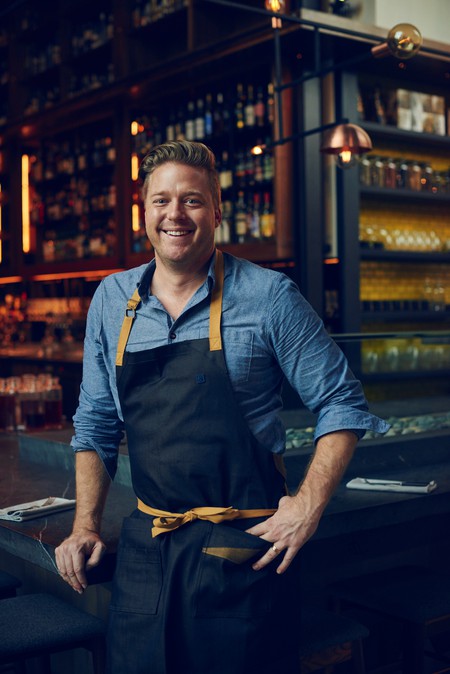 For the menu, Chef Hollingsworth uses his culinary background of over 13 years working in Napa Valley – beginning as a commis in 2001 and working his way up to chef de cuisine at The French Laundry – and merges it with his present roots as a new Angeleno living in Downtown LA. Prior to opening this solo project, Hollingsworth’s first restaurant endeavor in Los Angeles was Barrel & Ashes in 2014, an updated take on traditional American BBQ that pays homage to the food that Hollingsworth grew up on.

Hollingsworth sets the tone for diners at Otium to experience an environment of highly eclectic, vibrant, and seasonal flavors, as he strips away the formalities of fine dining while focusing on quality food and service. The restaurant first opened only serving lunch, with ambitious menu items like tri-tip with fried egg, rice and kimchi, and bucatini with egg, bacon, clam and crème fraîche. In early December, they expanded their menu to serve dinner and included now favorites like Hamachi with Nori, avocado, sweet & sour tomatoes​ and ​spinach fusilli​ with egg, bacon, clam, and crème fraîche. 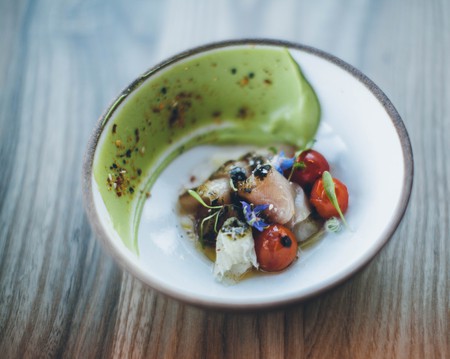 At first glance, the length of the haute cuisine menu may overwhelm diners, but after taking in the casual ambiance and beautiful décor, they are immersed in an elegant yet rustic atmosphere. To complement the colorful and thoughtful dishes sent out by Hollingsworth, the design of Otium is one heavy in natural materials, such as steel, glass, wood, copper, stone and ceramics. The tasteful mix of old and new elements, like the patina of copper blended with the large glass windows and hints of color throughout, gives the aura of sophisticated rusticity, much like the menu offerings.

And to and give the space a true local feel, Otium’s interior designers (Studio UNLTD and House of Honey), collaborated with local artisans to add to the soul of the restaurant. From the hand crafted chairs by Chris Earl, to the beautiful blown glass rain chandelier by Neptune Glassworks, and the vertical gardens provided by LA Urban Farms, Otium gives diners a unique and full sensory experience. One last distinctive piece of design is the large vine-inspired mural located on the wall by the bar: a collaboration with Sagmeister and Walsh, which says, ‘Inside out and Outside In.’ 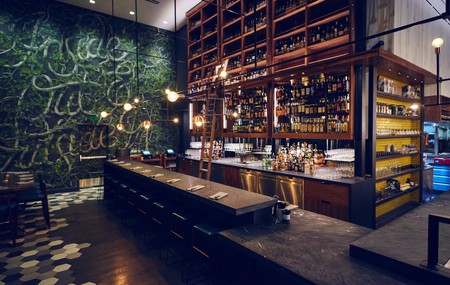