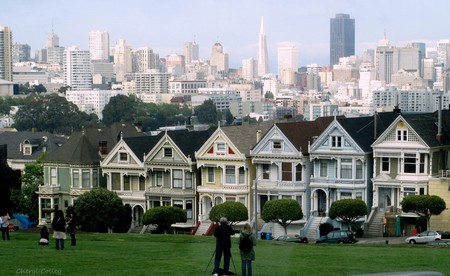 When people think of San Francisco, typically a few visuals pop up — the Golden Gate Bridge, Cable Cars and The Painted Ladies, to name just a few. But interestingly enough, the famous Alamo Square isn’t even the most impressive or interesting residences in our fair city. Read on to discover the lesser-known (but much more intriguing) must-see homes of San Francisco.

In 1912, Alma de Bretteville Spreckels and her real-life “sugar daddy” Adolph Spreckels commissioned the largest single family home in San Francisco. Nicknamed “The Sugar Palace,” this 55-room limestone French Baroque home sits perched high atop Washington Street, with pristine views of the San Francisco Bay. Alma de Bretteville would eventually become known as the “The Great-Grandmother of San Francisco,” but her early life was impoverished and full of hard work. To escape the laborious duties of her mother’s Danish bakery/laundry service, Alma enrolled in the Mark Hopkins Institute of Art, and it was during her time there that Alma became an artists’ model, scandalously posed for the Dewey Memorial in Union Square, and caught the eye of sugar magnate Adolph Spreckels. The Spreckels Mansion, a Beaux-Arts style masterpiece, was built by George A. Applegarth and was completed in 1913. Alma Spreckels devoted her life to providing the city of San Francisco with amazing art, even commissioning the stunning Legion of Honor and eventually filling it up with priceless relics, including Rodin’s “Thinking Man.” Alma lived in the Spreckels Mansion until her death in 1968. The best-selling author Danielle Steel currently resides in the lavish mansion and has grown an enormous privacy hedge that conceals most of the grand architecture, but the best view is from across the street at Lafayette Park. 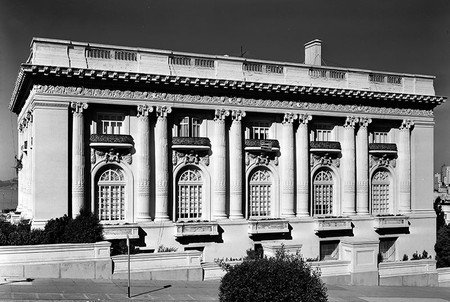 An unobstructed view of Spreckels Mansion | Courtesy of NoeHill.com 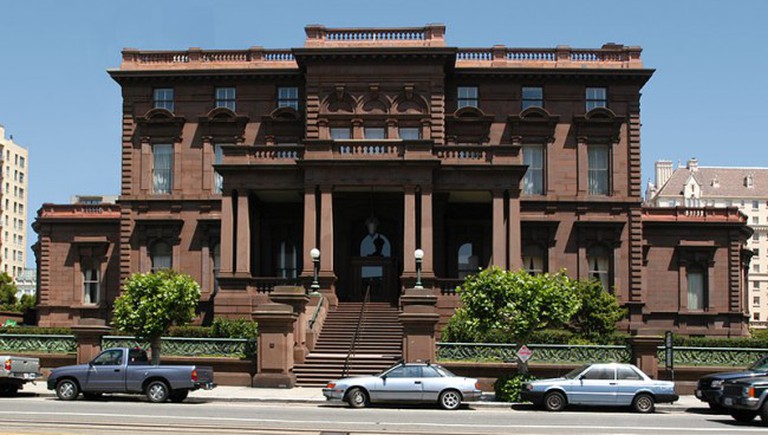 The grand and mysterious home of the Pacific-Union Club | Courtesy of Noehill.com
At the very apex of Nob Hill stands the stately James C. Flood Mansion, the present-day home of an exclusive gentlemen’s club. Now called The Pacific Union Club, the structure was the first brownstone west of the Mississippi River and is one of only two buildings in the area to survive the devastating 1906 earthquake (the other building is the nearby Fairmont Hotel). This beautiful building started out as a family home commissioned in 1885 by Silver Baron James C. Flood, but the home suffered severe damage during the historic quake, and the frightened Flood Family relocated to the James Leary Flood Mansion, another noteworthy home in the area. The building was then renovated by Willis Polk in 1889 and converted into a clubhouse for the gentlemen’s only Pacific Union Club, and it is used for this purpose to this very day. Some of the most powerful men in the world have spent time at the club, and not much is known about what transpires there. The Pacific Union Club has strict club bylaws that prohibit members from speaking about anything club-related, so naturally, scandal and mystery surround this historical location.
Open In Google Maps
1000 California Street, Lower Nob Hill, San Francisco, California, 94108, USA
+14157751234
Give us feedback 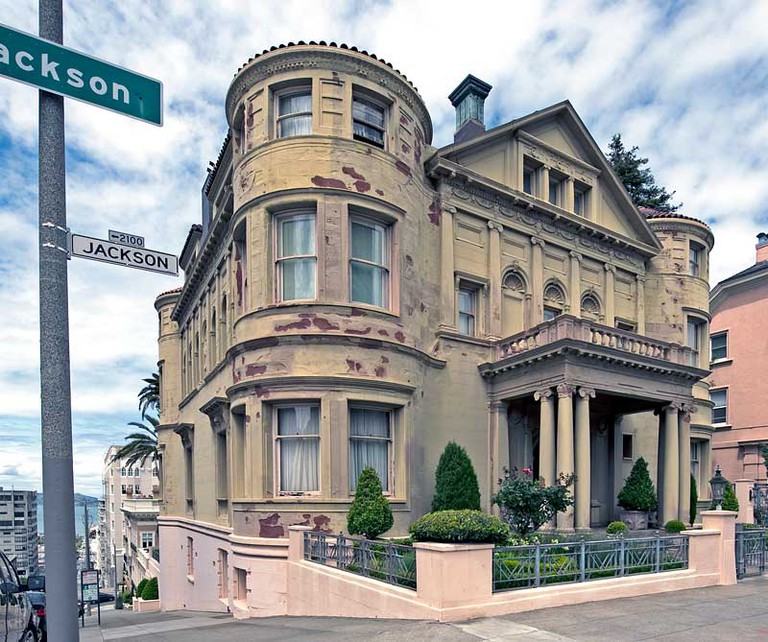 The romantic decay of Whittier Mansion | Courtesy of Noehill.com
When talented businessman William Franklin Whittier decided to build a home in 1894, he looked to San Francisco-born architect Edward R. Swain to construct a marvelous structure at the top of Pacific Heights. At the time, the home was an oddity, as one of the earliest California homes to be built of steel framework and stone, but the building withstood the 1906 earthquake with little to no damage. The Arizona sandstone mansion houses 30 rooms and cost $152,000 to complete, and William Franklin Whittier lived in the home until he died at age 85, leaving it to his only son. However, Billy Whittier was a notorious playboy and squandered away his inheritance, forcing him to sell the family home in 1938 —to the German Reich. For three years, the Whittier Mansion acted as the German Consulate, and it is rumored that the home was a base for spies collecting intelligence all across the US. Eventually, the property was seized by the government and has changed hands many times since. It is currently a privately owned residence and has fallen into a state of disrepair.
Open In Google Maps
San Francisco, California, USA
Give us feedback

It’s a little bit outside of San Francisco proper, but The Flintstone’s House is a local legend and an architectural wonder. Nestled high up on the hill in picturesque Hillsborough stands a free-form dome residence that is like no other. Built in 1976 by William Nicholson, the home was an experiment in implementing new building materials and techniques, and the modest three bedroom, two bath underwent extensive renovation in the late 1980s and received its bright orange paint job in the 2000s. With its cozy cave-like interior, sunny skylights, and one-of-a-kind design, it’s no wonder that this property is currently listed for the sale price of $4.2 million. 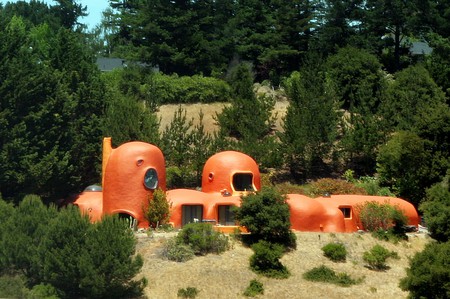 Uniquely domed and hidden high in the hills | © Sergei Krupnov/Wikipedia

Appearing out of nowhere in an unassuming San Francisco Marina neighborhood stands one of the most unique buildings in the city. The Old Vedanta Temple is the first Hindu temple built in the Western Hemisphere and is 111 years old, and when it was built, Swami Trigunatitananda paired up with architect Joseph A. Leonard to create the temple that would eventually house the Vedanta Society. The design of the building and the most minute details are extremely significant and clearly convey the message of The Vedanta Society — unity and respect for all. The first two floors are heavily influenced by Joseph A. Leonard and feature traditional Queen Anne details, but the Swami is responsible for the most unique aspects of the buildings design. The exuberant arches and the five large hollow domes each have a story to tell, and the structure is a blend of traditional Christian church motifs, Bengal temples and Russian Orthodox architecture — one dome is even an exact replica of the domes of the Taj Majal. The Swami wanted to demonstrate unification and reverence for all religions by showing that their symbols and religious art could coexist as one breathtaking building. 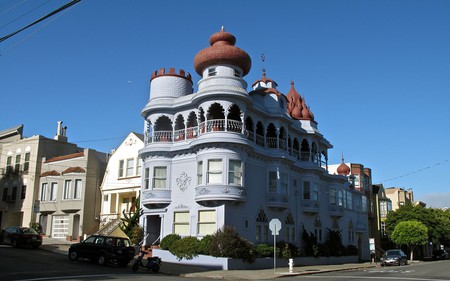 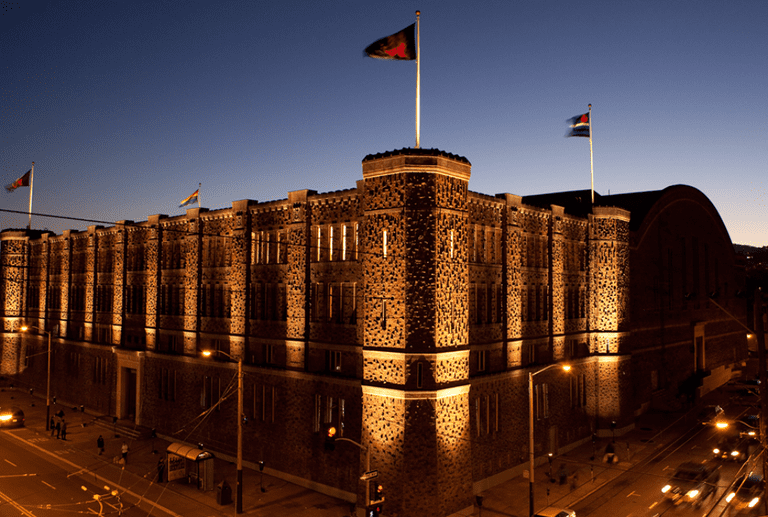 The Armory commands almost an entire city block | Courtesy of Armory Studios
The San Francisco Armory did not begin as a residence or an adult film studio — it was built in 1912 as a stronghold, a munitions depot, and rallying point for servicemen. This looming Moorish Revival castle is constructed out of stone and brick and takes up nearly 2.2 acres of its Mission neighborhood. Through the 1940s, the Armory was used primarily as a sports venue and some locals nicknamed the building the “Madison Square Garden Of The West,” but the Armory sat mostly unused and slipping into disrepair for about 30 years until adult film company kink.com purchased the building for $14.5 million and began intensive renovations. The building is now used as a personal residence, film studio and party venue. You can sign-up for workshops or enjoy guided tours of several different parts of the house, including areas that may or may not be haunted!
Open In Google Maps
Give us feedback 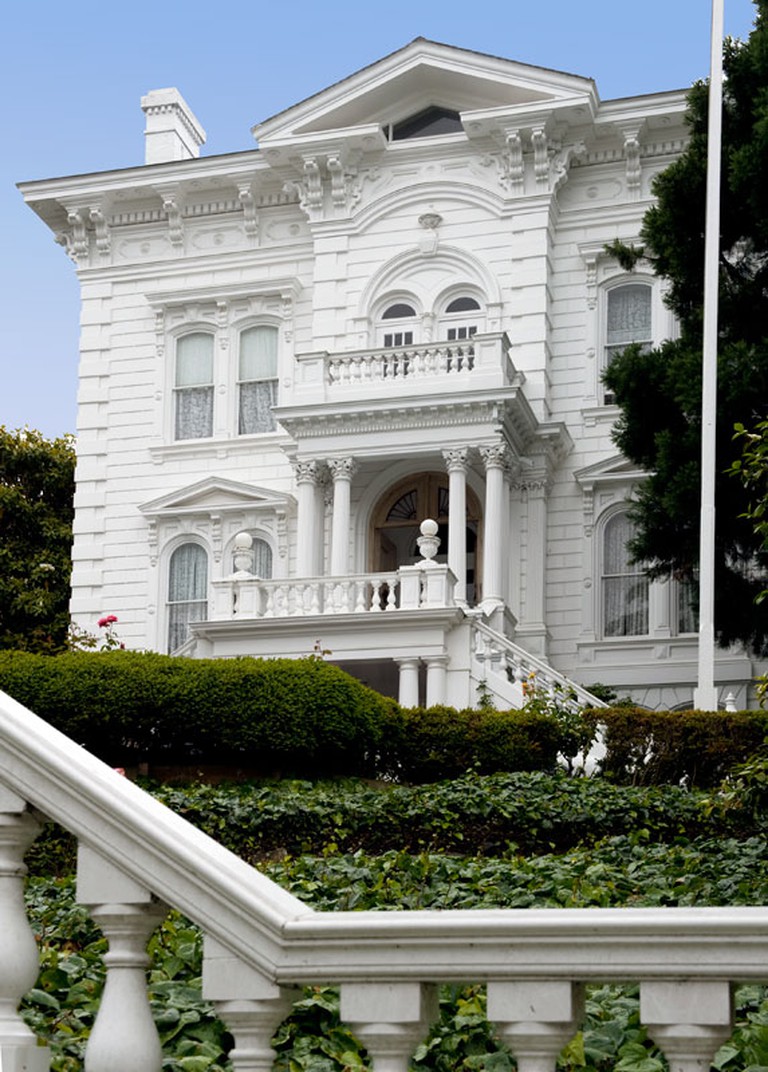 The stately white Casebolt House | Photo Courtesy of NoeHill.com
The pristine white mansion that sits high up on the hill at 2727 Pierce Street was built in 1865 and is called the Casebolt House. Built by Virginia blacksmith turned inventor Henry Casebolt, the large home housed the family’s eleven children until Henry sold the home in 1893. When Casebolt first decided to build the mansion in the Cow Hollow neighborhood, many locals looked down their noses at him — the area was largely undeveloped cow pastures and sandlots and smelled like dairy, but Henry began salvaging wood remnants from shipwrecks and compiling the building materials that he would shape into an Italianate Revival white palace. This opulent residence has been a private home since its sale by the Casebolt family in 1893.
Open In Google Maps
San Francisco, California, USA
Give us feedback 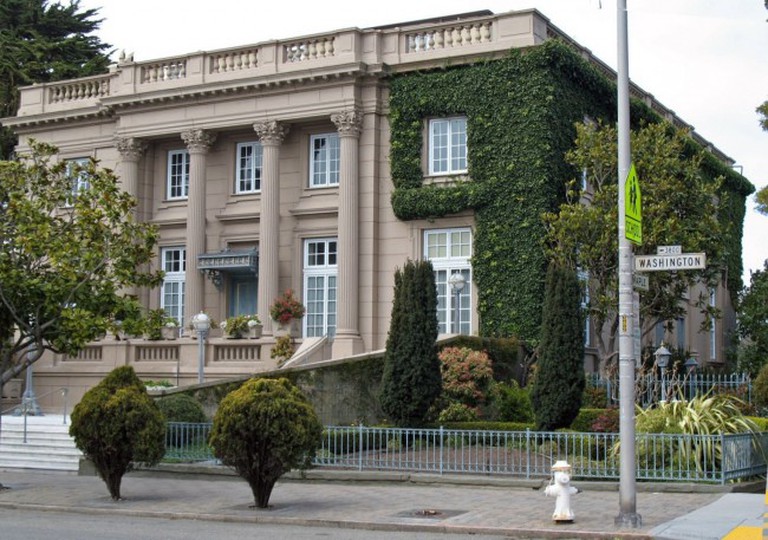 The Koshland House in Presidio Heights | © sanfranman59/Wikimedia
It was in 1902 that Marcus S. Koshland teamed up with architect Frank S. Van Trees to erect The Koshland Mansion, an exact miniaturized copy of the famous Le Petit Trianon. The gigantic residence is nearly 21,000 square feet and features rare art deco stained glass and multiple marble staircases. Koshland Mansion survived the 1906 quake with considerable damage to the four large columns and parts of the roof — however, the damage did not stop the family from using their large home as a shelter for displaced family and friends. Since Mrs. Koshland’s death in 1953, the home has changed hands multiple times, being bought and sold frequently but rarely lived in. Recently, a local ne’er-do-well took it upon himself to squat in the mansion for several months, even stealing and selling its treasures via yard sales and Craigslist. When city officials arrived at the mansion to question the squatter, he produced fake property ownership papers and is quoted as saying “To me, I thought I owned the place.” Most recently pop star Taylor Swift has been rumored to be interested in purchasing this historical property.
Open In Google Maps
San Francisco, California, USA
Give us feedback 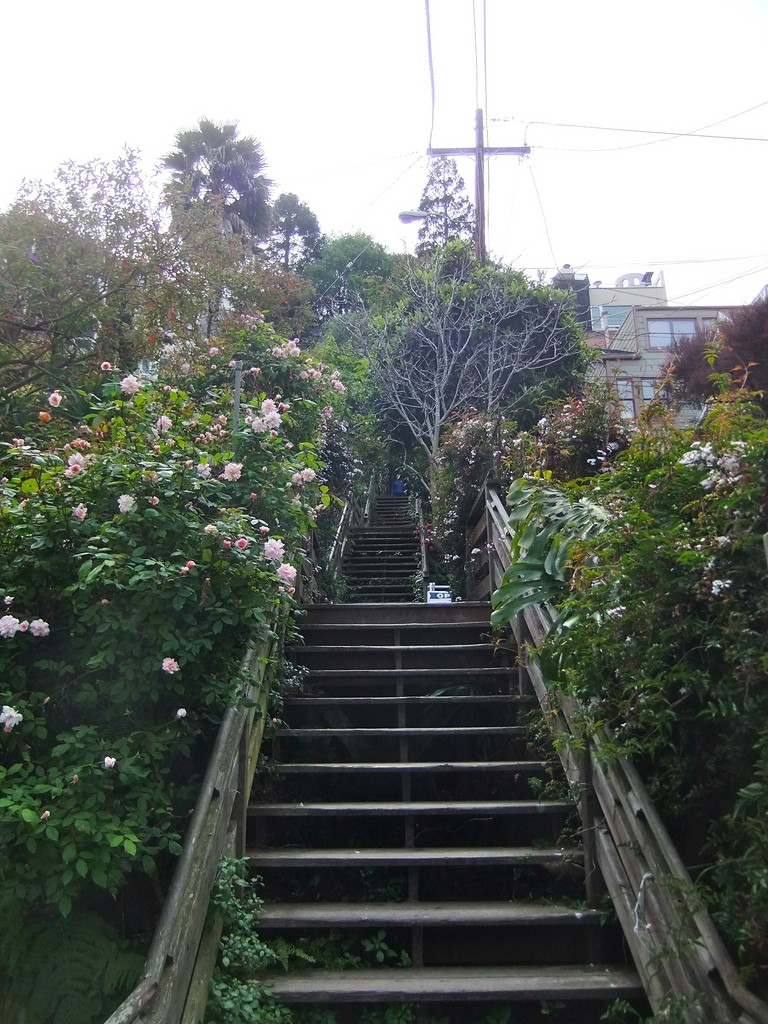 The quaint cottages and gorgeous gardens that hug The Filbert Steps are not to be missed | © James Cridland/Flickr
The Filbert Steps and the beautiful gardens and homes that border them are some of the prettiest sights in San Francisco. Brightly colored wooden cottages dating back to the 1900s are lined all the way up both sides of this incredibly long, 600 steps long, wooden staircase. The lush greenery is maintained by the residents of these historical steps, and many of the garden are open to the public. The only access the residents of The Filbert Steps have to their homes are the long wooden stairs — can you imagine trying to move or carry bags of groceries? Bring a camera, grab a picnic lunch from local-fave Molinari Delicatessen in North Beach, and find and open bench on the The Filbert Steps to enjoy your day.
Open In Google Maps
San Francisco, California, USA
Give us feedback 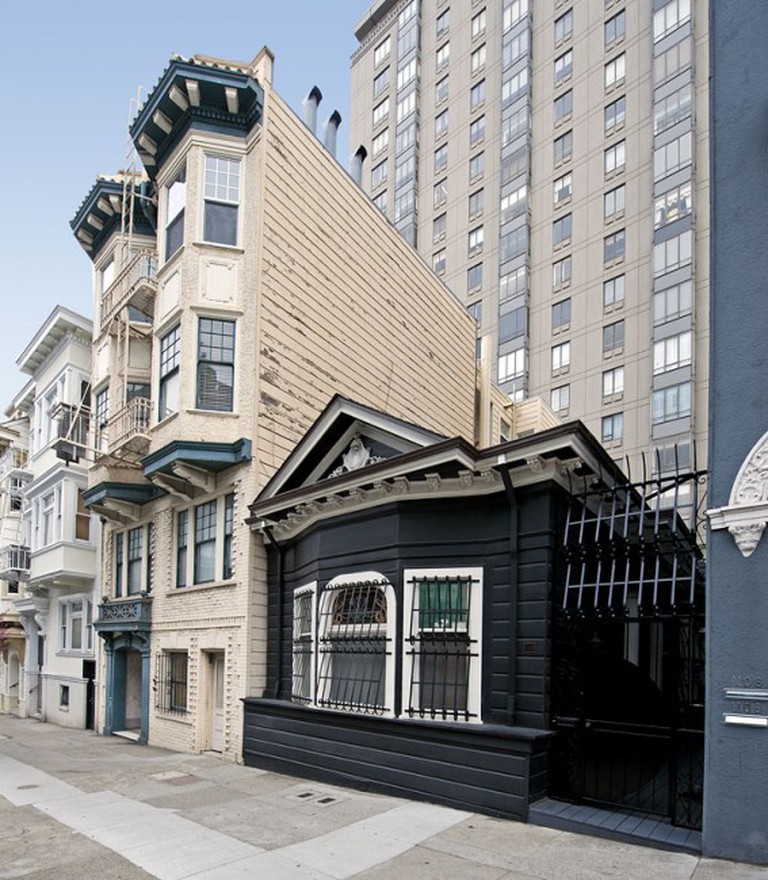 A miniature among giants | Courtesy of Noehill.com
In a towering city of apartment tenements, mansions, and skyscrapers, this dainty Neo-Georgian built in 1906 really stands out. Commissioned by William Keating (a coachman for the illustrious Flood Family) and built by architectural firm Stone & Stone, this one-story with a basement is an oddity here in San Francisco. The building gained its landmark status in 2005 and has a new, almost gothic-looking black and white exterior paint job. It’s unclear as to whether this building is still a private residence or if it is open as a meeting space.
By Amanda Walker-Storey
Amanda Walker-Storey is a makeup artist, glamour model and writer living in San Francisco, Ca. When she’s not writing for the Culture Trip, Amanda writes content for Deal Killer, a live comedy dating/relationship gameshow. Amanda has a severe addiction to buying lipstick and will flip out if there are tags left inside of her clothing. No, seriously flip out.
Open In Google Maps
San Francisco, California, USA
Give us feedback
Give us feedback