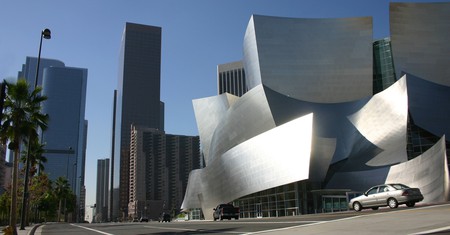 Although best known for its film studios and Hollywood glitz, Los Angeles has long been a center of the music industry and is undoubtedly one of the best places to see live music in the country today. From the legendary Sunset Strip and the iconic Capitol Records Building to the Hollywood Bowl and a multitude of venues hosting emerging artists, here’s a music lover’s guide to LA.

Revel in rock history on the Sunset Strip

Though perhaps not as wild as it used to be, the once-gritty Sunset Strip is famed for its colorful rock ‘n’ roll history. Here, among the live-music clubs and looming billboards, rock legends were made. The strip, running about 1.5 miles (2.5 kilometers) along Sunset Boulevard, became a frequent haunt of musicians in the 1960s, when exclusive nightclubs gave way to clubs and venues. David Bowie, Jimmy Page, Jim Morrison and others frequently played and hung out at clubs like Whisky a Go Go and The Roxy, which are still around today.

Other clubs, like the ’70s hotspot Rodney Birgenheimer’s English Disco, are but memories. In the ’80s, the Strip birthed numerous glam-metal acts, among them Guns N’ Roses and Mötley Crüe. Today, guests can still relive the glory days (if in a slightly less debauched way) and see live music at a number of venues, including Viper Room and The Troubadour, or get a drink at Rainbow Bar and Grill, a popular hangout for music legends including John Lennon, Alice Cooper and Lemmy of Motörhead fame. 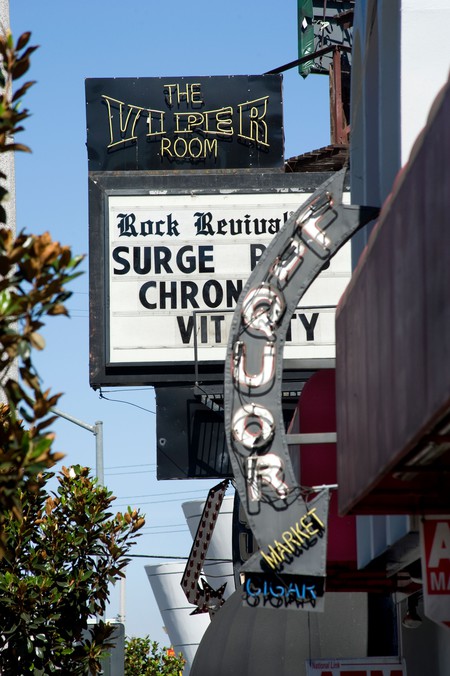 Hollywood’s Walk of Fame is often high on the list of must-visit attractions in Los Angeles. Though many notable musicians are honored on this famous stretch of sidewalk, a special section, outside the Guitar Center on Sunset Boulevard, is reserved for rock musicians. Established in 1985, this stretch is officially known as the Guitar Center RockWalk. Here, you’ll find the handprints of Val Halen, The Cure, Nancy Wilson and ZZ Top. Iron Maiden’s prints include a skeletal handprint meant to belong to band mascot Eddie. New inductees to the RockWalk are chosen by past honorees. 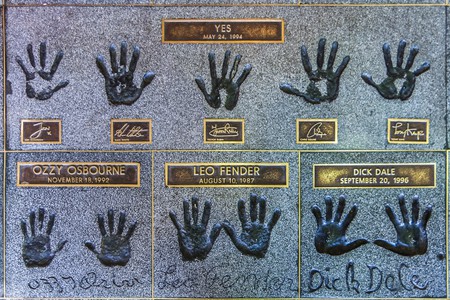 Browse the shelves at Amoeba Music

In terms of finding some music-themed souvenirs, you’d be pushed to find a better spot than Amoeba Music. One of the largest record stores in the world, independent Amoeba Music’s Hollywood location boasts two floors packed with music, DVDs, games, art and posters, and even hosts the occasional free live show – Paul McCartney’s 2007 EP Amoeba’s Secrets was recorded here, in an unannounced live performance. The company has announced that their iconic Hollywood location will soon be moving from its current space at 6400 Sunset Boulevard, but has reassured fans that the new store will stay in the vicinity. 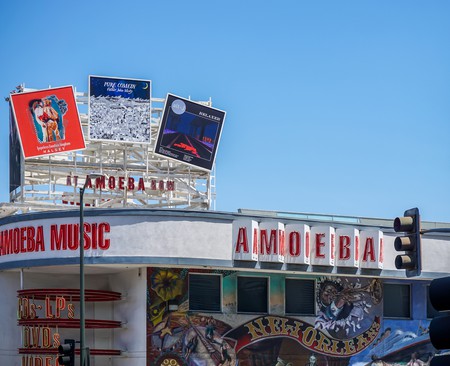 Catch a show at the Hollywood Bowl

No LA music tour would be complete without a visit to the legendary Hollywood Bowl. Opened in 1922, this famed amphitheater and veritable LA landmark abounds in history, which is detailed via a range of exhibits in an excellent free museum. Acts including The Beatles, Nine Inch Nails, Genesis, Lady Gaga and Tony Bennett have played on this stage, and top acts — from rock to pop to the LA Philharmonic — continue to do so regularly. 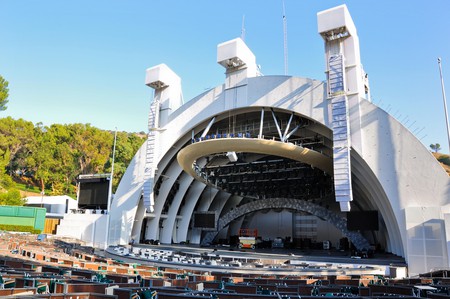 The Grammy Museum at LA Live opened in 2008. This innovative museum contains exhibits and ephemera relating to the history of music and how it’s made, as well as the history of the Grammy Awards themselves. While many are drawn to the museum because of its artefacts – such as elaborate rhinestone-adorned costumes worn by Dolly Parton – you will also find interactive exhibits that aim to inspire visitors to learn about musical genres and the recording process. Rotating exhibits have focused on individual artists including Taylor Swift, Barbara Streisand, Roy Orbison, Elvis Presley and Michael Jackson. Lectures and other events are held in the museum’s 200-seat Clive Davis Theater. 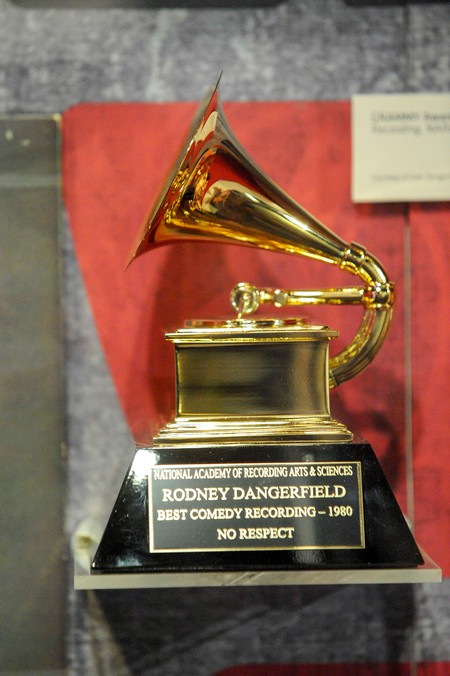 Set in downtown LA, the Los Angeles Music Center consists of several buildings that offer a blend of art, culture and live entertainment: the Keck Amphitheater, the Walt Disney Concert Hall, the Dorothy Chandler Pavilion, the Mark Taper Forum and the Ahmanson Theatre. The most recognizable building is undoubtedly the Walt Disney Concert Hall, designed by architect Frank Gehry.

Members of the public can take a free 90-minute tour of the Center on select days, starting at 12 or 1.15pm. The tour offers a fascinating insight into the history and architecture of the buildings, as well as the four groups who regularly perform there: the LA Opera, LA Philharmonic, Center Theatre Group and LA Master Chorale. Guided and audio tours of just the Walt Disney Concert Hall are available as well. After a tour or a show at the Center, guests can stop in at nearby Kendall’s Brasserie or Kendall’s speakeasy, The Board Room, for a craft cocktail. 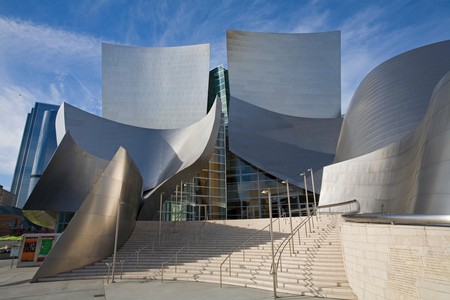 On the face of things, Canter’s is a landmark deli where folks come to chow down on delectable pastrami sandwiches before hitting up a music, theater or comedy show at one of the many nearby venues. Yet this Jewish-style delicatessen also represents a key piece of rock history. Its current Fairfax Avenue location, opened in 1953, quickly became a hangout for entertainment industry leaders, and has remained a favorite with rock musicians to the present day.

The connection to the showbusiness world is also deeply personal: Marc Canter, who currently owns the restaurant, was a childhood friend of Guns N’ Roses guitarist Slash. An iconic photo of the band sitting in one of the booths was taken by photographer Jack Lue. It was also allegedly the scene of a fight between Tom Waits and punk band The Bags. Canter’s is open 24 hours, so stop by anytime for some matzah-ball soup or one of those classic pastrami sandwiches. 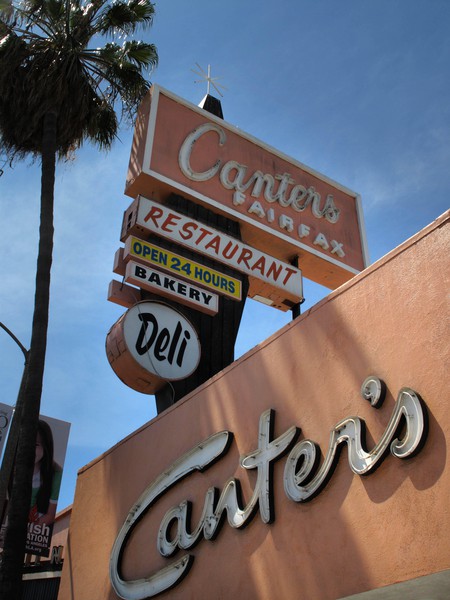 Get a glimpse of Capitol Records

Capitol Studios opened its doors over 60 years ago, getting down to business with Frank Sinatra’s Frank Sinatra Conducts Tone Poem of Color. In addition to hosting recording sessions for acts including Green Day, the Goo Goo Dolls and Paul McCartney, the Capitol Records Building is also where a number of hit albums and soundtracks have been mixed, and is where the orchestra for the Academy Awards rehearses and records. The studio is still functioning and busy, and their current artists often record performances on the iconic tower’s roof. Guests are typically not able to tour the studio, though they do occasionally open up for ticketed special events. Tourists are free to take photos in front of the tower and its mural, Richard Wyatt Jr’s Hollywood Jazz. 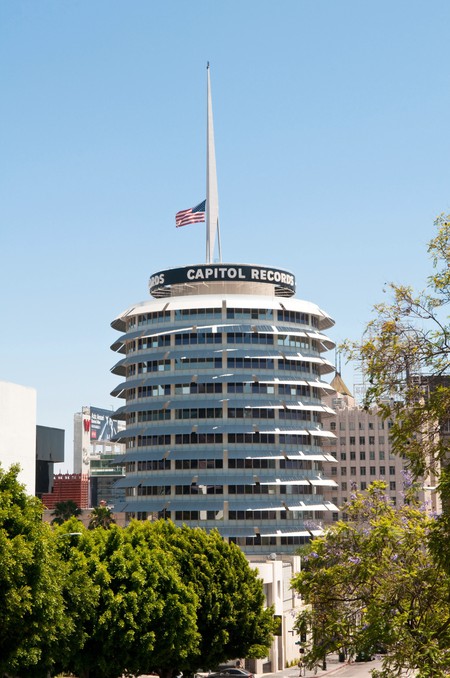 Many hit albums have been recorded and mixed at the Capitol Records Building in Hollywood, Los Angeles | © Mick House / Alamy Stock Photo

It’d be impossible to name all the music venues and bars showing live bands in Los Angeles, but if you’re looking for a bar with live music, we’ve got a list of them here (many without a cover charge). For emerging indie acts, it’s worth seeing who’s on the bill at Teragram Ballroom in Westlake, Hi Hat in Highland Park, Silver Lake’s The Satellite, The Echo in Echo Park and The Hotel Café or Three Clubs in Hollywood. 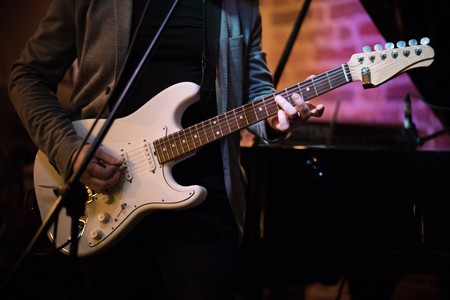