Down a stretch of Melrose Avenue in Los Angeles are vivid, joyous expressions of art. They are displayed on several walls, storefronts and everyday street objects. These depictions are envisioned by a bevy of talent, including world-acclaimed commissioned artists. Stroll down Melrose, between Fairfax and La Brea, to appreciate spray-painted scenes of mirth. 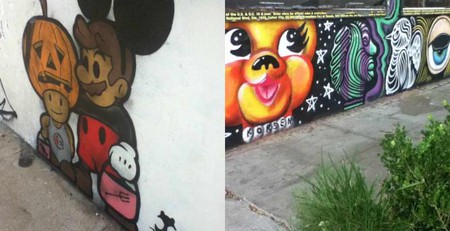 Off Melrose and Spaulding: Trust Icon and Korsen Wall Art

On the south-east corner of Melrose and Spaulding Avenue stands a vacated building covered with a mix of indiscernible graffiti, etched poems and drawings. Most notable on the wall is the image of a Mickey Mouse-Super Mario hybrid caricature embracing a pumpkin head character. Celebrated British artist Trust Icon depicts a happy bond between the two subjects.

Across the way is a busy car wash business, decked out with an amusing mural treatment by LA-based artist Jennifer Korsen. Her whimsical, cartoon-like puppy enchants with its expressive eyes and jocund lips. The icon easily puts a smile on faces young and old – the latter who can now actually enjoy waiting for their cars to be serviced. 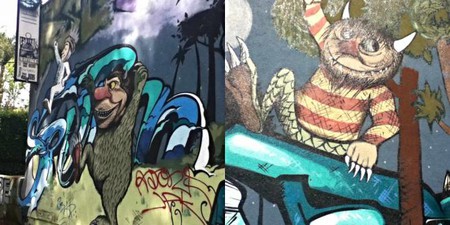 Street art: Where the PDB Things Are, by PB Group; Photo | © Marie Cradle

Ode to a Classic: PDB Mural

The classic children’s tale, Where The Wild Things Are is the inspiration behind this mural by street artist collective, PDB Group. This frequently-visited Melrose attraction brings a smile from several grown-up onlookers by awakening their own imaginative childhood. The pictorial parody features principal book characters, Max, Carol and Judith. Though the mural has been partially vandalized by graffiti taggers, it still maintains its glory. 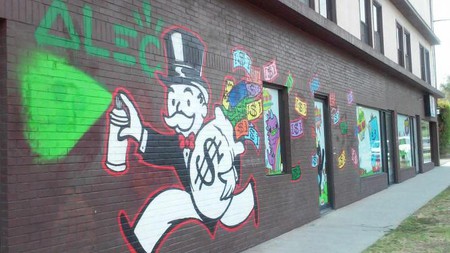 On the side wall of the Puzzle Zoo gift shop is one of several iconic mural paintings by world-acclaimed artist from New York, Alec Monopoly. Depicted here is the recognizable symbol of wealth, Mr. Monopoly, also known as Rich Uncle Pennybags. Alec Monopoly uses the famous icon as a central muse, having created this and many dozens of other Mr. Monopoly characterizations. 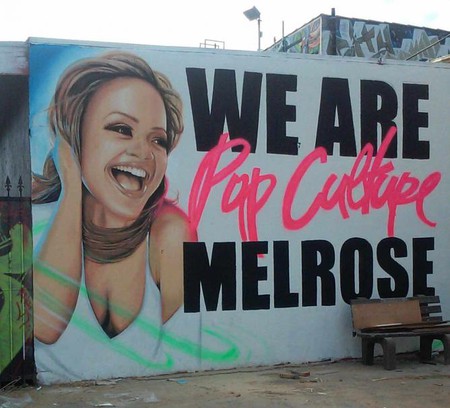 We Are Pop Culture Melrose

Early July 2015 marked the arrival of new Melrose clothing boutique, We Are Pop Culture, owned by singer and celebrity host Christina Milian. The pop-up fashion store, graced with a sizable pre-opening mural, features a jubilant Milian, who speaks often and passionately on trendy urban fashion. The spirited buzz about We Are Pop Culture in the Melrose neighborhood reflects the cheerful face seen here on the mural. 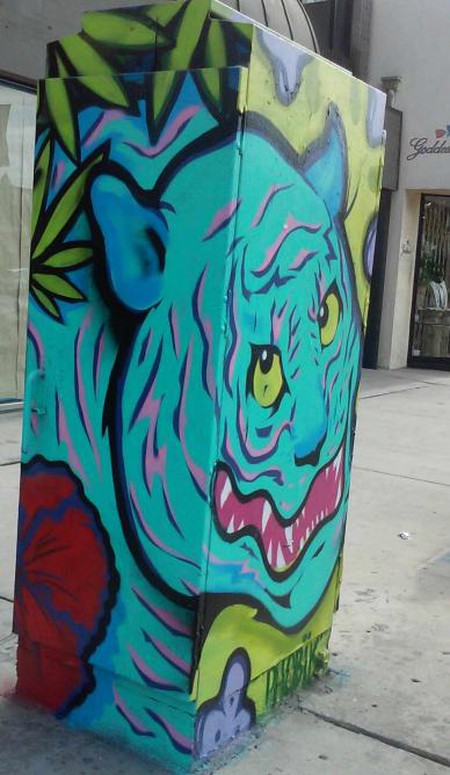 The writing (and street art) is not always on the wall. Imaginative street artists enjoy transforming ordinary infrastructure, such as utility boxes, into eye-catching objects of art. Spray-painted boxes featuring vividly-colored, smiley creatures are exhibited along Melrose. The monster painted on the box featured above is simply signed “Phobus.”