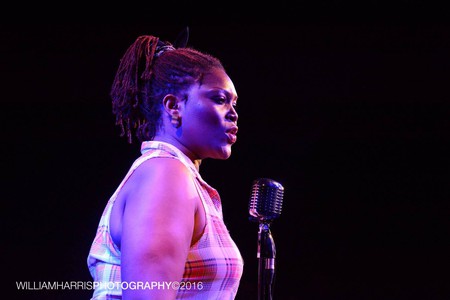 When Joyce Lee wanted to try out new poetry, she headed to Dorsey’s Locker, an iconic Oakland restaurant that has since closed its doors. But the restaurant did things a little differently than most: the room would never be silent, even for performers.

“Your poetry has to be good enough to make the room silent across the board,’ she said. ‘If I could make them shut up, I knew it was an okay piece.”

Joyce Lee, an Oakland native, has been performing spoken word since attending New College in San Francisco, where she heard a classmate perform a slam poem. The two then attended a show at the Starry Plough, an Irish pub with open mic nights and performances, where Charles Ekabhumi, the co-founder of the Berkeley Slam, got on the stage.

“The next woman who volunteers to perform next week, I’m gonna buy all her drinks,” Ekabhumi said to the crowd, according to Lee.

She raised her hand. “So I came with one poem and I made it to the second round,” she said.

That was back in 2008. In 2009 and in 2010, she was the Oakland Grand Slam Champion, and she now tours internationally and nationally.

“I was a writer when I came into slam,’ Lee said. ‘All my favorite poets were dead white men…I looked at slam like wow, what a unique way to write.”

Growing up, Lee was a child of divorce, and moved around often. She herself married at a young age and then divorced. But it was these experiences that she draws on as a source of inspiration for her poetry. She was ‘always looking for words, always looking for definition,’ to describe her life. She is also an educator, a job that often provides a source of inspiration as well, though she keeps her poetry career secret from her students.

One of her greatest sources of inspiration is her hometown itself. Her poem, New White Folks and Weather in Oakland, is beautifully tragic, describing the harsh realities that gentrification has brought to the area. But the Oakland of Lee’s childhood was a much different reality–a multicultural melting pot, where Asians, Latinos, blacks and others lived in a harmony as perfect as the salsa music that echoed in the streets.

“It was diverse, and it was ten worlds in one and it gave you all of it at once,’ Lee said. ‘It was beautiful, it was absolutely beautiful.”

Lee’s adventurous spirit took her to Europe, where she found herself broke in Germany. She lost her debit card on her way to the airport, her plans for money fell through, and she didn’t speak a word of the language. But she refused to go back. So she called up a friend from college who she hadn’t spoken to in years, who arranged a place for her to stay for one night. Luckily, Lee had a show the next night.

“At the show I was like, I gotta flip this show into 3 more shows,” she said.

Her success was nearly immediate. She met the woman who would soon become her manager in a local cafe, where she gave her a pitch just a few minutes after meeting her. During her 90 days living in Frankfurt, she only had two shows with an audience under 500.

She loved her international travels so much that when her German visa expired, she decided to move to Turkey for a year. Now back in the United States, she is busy preparing to perform the second year in a row for Circus Automatic in October and is going on tour with NPR’s Snap Judgement. But she’s been procrastinating recently, she joked. Her drawn-out writing process consists of pacing, talking to herself, writing, and listening to hip-hop and jazz music.

“I usually go inside myself,” Lee said. “I try to get the rawest truth or make them laugh.”