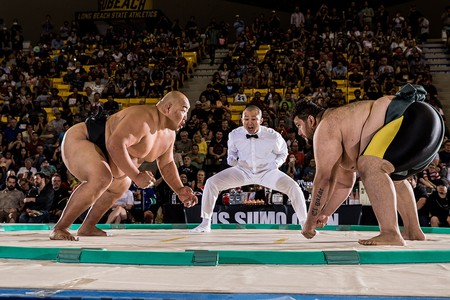 Andrew Freund was thumbing through the pages of the Tokyo Journal, an English-language publication in Japan. Freund, who was in the country to teach English, saw an ad for an upcoming sumo tournament at the Ryōgoku Kokugikan and bought a ticket for about $20.

He went to the arena, but it was sparse when he first arrived. Being a sumo newcomer, he later learned the lower-ranked participants compete earlier in the day during the two-week long tournament; it isn’t until around 5 p.m. that the more popular names take to the mat, thus increasing the audience.

“I’m there at 9 a.m. and the whole place is practically mine, but I’m up in the rafters,” Freund said. “I sat there for eight or nine hours.”

Today, Freund is far from the sumo novice he was back in the early 1990s. In fact, he’s one of the main advocates of the sport in the United States—he is the founder and director of the U.S. Sumo Open, and has created, choreographed, produced and announced more than 700 sumo tournaments and exhibitions worldwide. Freund was inducted into the Martial Arts History Museum’s Hall of Fame in 2012. 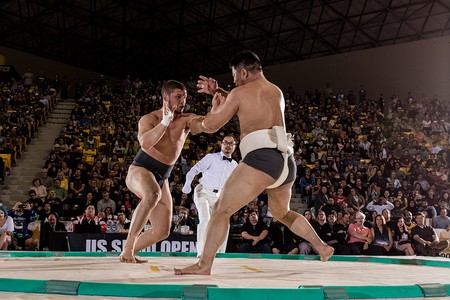 After returning to the U.S. following his teaching stint in Japan, Freund began teaching at colleges and universities in Los Angeles. He and a friend attended a Japan expo in the city and the two even volunteered to be sumo participants in an on-stage showcase. From there, Freund founded the UCLA Sumo Club and the U.S. Sumo Open. Begun in 2001, the U.S. Sumo Open is the largest and longest-running annual sumo competition in the world outside of Japan.

“With the first tournament I bit off more than I could chew,” he said. “I barely slept, I spent every penny I owned. I said, ‘I’m never going to do this ever again,’ but then I did it again the next year. We’ve increased our fanbase from around 600 to over 1,000 to now more than 4,000. We’ve also increased the number of participants and the quality. It’s been an improvement every single year.”

The 2017 U.S. Sumo Open is at 1-4 p.m. on Saturday, June 17 at Walter Pyramid on the campus of California State University, Long Beach. More than 60 sumo wrestlers from 15 countries, including Japan, the United States, Norway, Egypt and Mongolia, comprise the field headlined by four-time World Champion Byambajav Ulambayar of Mongolia. Ulambayar, 6-foot-1, 353 pounds, is a nine-time U.S. Sumo Open gold medalist; he took first place at the 2016 Open in both the heavyweight and openweight divisions, going a perfect 13-0.

“A lot of people when they hear ‘sumo’, especially when we started, think it’s just big fat guys waddling around,” Freund said. “One of the things that helped spur the growth and popularity is they see the fastest movements they’ve ever seen; matches can be over in one second. There’s incredible speed, athleticism, reflexes. When people watch it they realize it’s no joke.”

Freund, who has a background in kendo, tai chi, aikido, and other martial arts, also has first-hand experience with the speed, athleticism and reflexes utilized on the mat. When he isn’t producing, announcing or organizing sumo-related events, he is a national and international sumo wrestler himself. At 6-foot, 165 pounds, Freund competes in the lightweight division and is a multi-time National Sumo Champion.

“It’s fun; I’m not doing it to be No. 1, I’m challenging myself and keeping myself in shape,” he said. “It’s a focus on personal development, rather than striving to be champion. It’s enjoyable because it keeps you motivated and focused.”

Culture Trip: You obviously have experience and knowledge of sumo in both Japan and the United States, so how do they compare?

Andrew Freund: Pro sumo in Japan is like being in the military. It’s 24-7, year-round. When you enter, you’re in until you retire. Your whole life is regimented every day of the year. There’s no offseason. The people involved in sumo in this country are like weekend warriors—they’ll come from wrestling, judo or football backgrounds and change over to sumo.

CT: For someone who may not be familiar with sumo, is it hard to comprehend or understand?

AF: Not only is sumo non-stop action—there could be 120 matches in a three-hour window, but it’s also really easy to understand. It’s immediately comprehensible to anyone—you win by pushing your opponent down so they touch the ground or shove them out of the ring. There’s no punching and kicking, it’s just grappling. It’s a fun sport.