Malibu Hindu Temple: A Spiritual Mecca In The Mountains 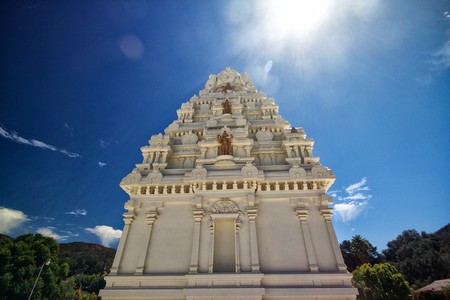 The Malibu Hindu Temple, located in California, is believed to be one of the better examples of Hindu architecture anywhere outside of the Asian subcontinent.

Writing for cjonline.com, Tom Kisken notes that the temple is ‘modeled after the Sri Venkateswara Temple in Tirupati, India – an ancient sanctuary of such significance that some call it the Hindu Vatican. To replicate the original, the Malibu structure’s sculpted towers were built by artisans from India as sort of stone storybooks with deities and scenes revealing the history of Hinduism.’ 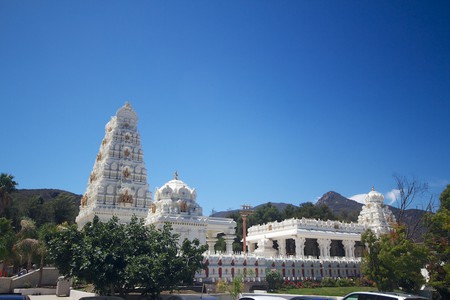 Describing in greater detail the jaw-dropping majesty of the sprawling and otherworldly temple grounds, a reviewer for Atlas Obscura wrote that the temple ‘exists in honor of the Hindu god Venkateswara, though it contains altars within dedicated to other Hindu deities. An expansive subterranean room provides space for services and recitals of complex Indian traditional music. An incense-laced marble-laden sanctuary dedicated to Shiva features tiered chandeliers and multiple mandirs for other gods. An outdoor deck above features more murtis in individual shrines, and an elevated central temple stands in veneration of the temple’s namesake. 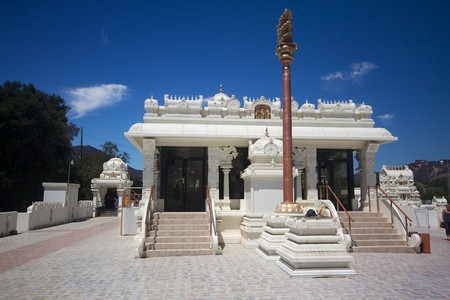 At page 86 of his treatise, Religions of the World (Macmillan Publishing Company 1991), Lewis M. Hopfe describes Hinduism as ‘[p]erhaps the oldest and most complex of all the religions of the world.’ Focusing on the religion’s characteristic tolerance, Hopfe writes: ‘Hinduism allows for literally millions of major and minor gods, their temples and their priests. Therefore, for the Hindu, the possible religious views are virtually infinite.’

In an interview for The Bull Magazine, a priest at the Malibu Hindu temple named Samudrala explained: ‘We have only one god, but in different forms,’ and ‘[t]hat’s why we have ‘G.O.D.’ – generator, operator, and destroyer.’ (‘The ‘G’ refers to Lord Venkateswara, who is the creator, while the latter two letters are meant to represent Vishnu the protector and Shiva the destroyer, respectively.’). Interviewed by The Los Angeles Times in 1998, Lina Gupta, a teacher of philosophy and religion at California’s Glendale Community College perhaps summed it up best, saying: Followers of Hinduism ‘chose [their] god or goddess as a personal favorite, but you show your respect to all other forms – because they are all manifestations of the one God.’ For example, as a temple priest explained to cjonline.com, ‘the elephant sculpted onto a small stairway at the temple is a symbol of spiritual strength and then [before] delving in to the need for that strength – the unpredictability of life, [the priest] said: ‘God will protect wherever we are. If you feel full peace of mind, you must be pure. And you must have a clean heart.’ 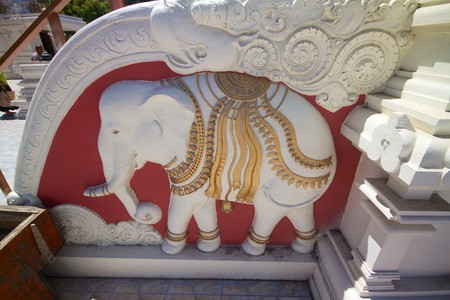 An elephant sculpted onto a small stairway at the temple is a symbol of spiritual strength | Courtesy of Josh McNair, CaliforniaThroughMyLens.com

Walking barefoot on the cool and immaculately clean marble floor of the temple complex (visitors must remove their shoes at the entrance, though socks are optional), the smell of incense wafts sweetly through the air, instilling visitors with the temple’s calming, soothing aura. A common sight on the temple grounds are the polite and gregarious priests – all of whom come from India – and live full-time at the temple complex; the priests go about their daily activities and devotions to the temple’s deities during the day and do not interact with guests unless asked questions, or for a tour – or unless a visitor pays for a specific ‘puja’ (a prayer service) to be performed.

Hollywood being just thirty minutes from the Malibu Hindu Temple (in good traffic), prospective visitors won’t be surprised to learn that a number of celebrities, including pop singer Brittany Spears and Beach Boy Mike Love, have patronized the temple, each paying the priests for a variety of pujas. Additionally, the temple’s stunning grounds were ‘featured in the 1997 Chris Farley film Beverly Hills Ninja and [in a]1998 Tamil film,’ a popular Bollywood movie called Jeans.

On weekdays, the temple is open to visitors between 9 am and 12:30 pm, and also, between 5 and 8 pm (though in the winter, the temple closes to the public at 7 pm); on the weekend, visiting hours are between 8 am and 7 pm.

On weekends, a kitchen in the temple’s basement level serves up tasty and cheaply priced vegetarian fare paired with strong chai tea.

The temple does not charge an entry fee but donations are both accepted and appreciated. Photographing the exterior of the temple and its grounds is permissible, however no photography is allowed inside the various individual shrines within the temple complex.