Living Longer in the Blue Zone

We will all die, that much is certain. The specifics of how and when are mostly unknowable—if you’re lucky—but if you’re American, statistics suggest you’ll kick the bucket at around 79 years old, probably from heart disease or cancer. Unless, that is, you happen to reside in Loma Linda, a Southern Californian town bordering the birthplace of McDonald’s, where residents push the limits of human longevity far beyond the national average.

It’s 7:30am on a Wednesday morning in Loma Linda, and already spaces are scarce in the parking lot of the Drayson Center, a health and wellness facility owned by the town’s university. In a large sun-drenched studio overlooking landscaped gardens, a step-aerobics class is in full sweaty swing, and the women in attendance could give Helen Mirren a run for her money in a bikini contest. One, dressed in a loveworn Rebel Without a Cause T-shirt, performs squats, bicycle crunches, and bicep curls with the casual confidence of somebody who trusts the strength of her own body, regardless of its biological age.

In the back row, holding her own with a pair of dumbbells, is Marijke Sawyer—a member of the senior committee at Drayson—who helps run an annual over-55s triathlon every September. The race entails 20 minutes on a bicycle, a 1-mile run, and a 100-yard swim; after class, she tells me these activities “might not seem particularly impressive to a young person, but it’s a real achievement for the older people in our community, which is why everybody who crosses the finish line gets a medal.” The oldest participant to compete in 2016 was a gentleman in his 90s, which seems pretty damn impressive to this youngish person. It’s clear the people of Loma Linda take exercise incredibly seriously. In fact, it wouldn’t be overstating to say they’re religious about their health in general. 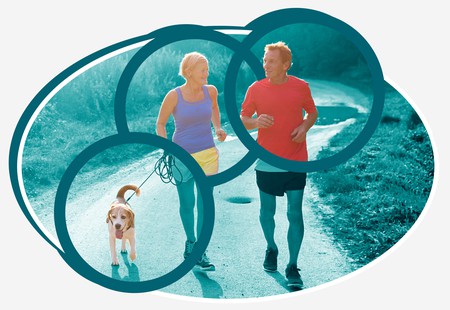 A large proportion of the town are Seventh-day Adventists—a Christian denomination underpinned by a belief that healthiness is close to godliness. Seeing a “clean” lifestyle as the best way to serve the Lord, they eschew modern vices and make healthy activities a central tenet of their routines. You will struggle to find a cup of coffee in some parts of Loma Linda, and bars are few and far between, which makes sense, because a hangover—as anybody who has experienced one knows—is truly the antithesis of holiness.

The bonus of keeping their bodies in tip-top condition for spiritual service is an extended life expectancy. Loma Linda is what is known as a “Blue Zone”—a location where the community lives to age 100 at 10 times the rate of the general population. The term Blue Zone was originally coined by writer and National Geographic explorer Dan Buettner, who teamed up with researchers, anthropologists, demographers, and epidemiologists to pinpoint the healthiest enclaves around the globe: The Barbagia region of Sardinia (Italy), Okinawa (Japan), the Nicoya Peninsula (Costa Rica), Icaria (Greece), and the Seventh-day Adventists of Loma Linda, California. Five very different communities from four separate continents that, according to Buettner and his team, live by a set of remarkably similar principles. They have unknowingly devised a blueprint that makes centenarian status possible for us all, in theory at least.

A short distance from the Drayson Center is the Loma Linda Market—a Wholefoods-like store full of fresh produce and supersized tubs of nuts, legumes, and grains. The range of niche “vege meats” is staggering even to a lifelong vegetarian like me, and it reveals a lot about the town’s approach to diet. Reasonable estimates suggest only around half of Adventists eat meat on a regular basis, defined as more than once a week. The other half fall somewhere on the vegetarian scale, from consuming meat just a couple of times a month to strict veganism. 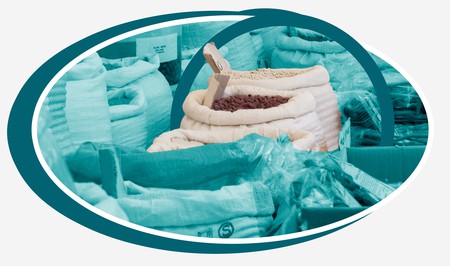 These stats are based on a study of 96,000 Seventh-day Adventists conducted by researchers at the Loma Linda University—the third in a series of cohort studies that began in the 1950s, comparing the health of vegetarian and non-vegetarian Adventists over time. Findings consistently suggest a correlation between a vegetarian diet, fewer health concerns, and a lower risk of mortality.

On average, the vegetarian Adventists have been found to have lower levels of cholesterol, lower blood pressure, and a decreased risk of becoming diabetic. They have less chance of developing cardiovascular disease and cancer, particularly colorectal cancers. They also weigh less. In fact, the more animal products in the diet, the heavier the individual tends to be. Most critically, though, the vegetarians appear to live longer. The average American woman will live to 82, but a vegetarian Adventist female from Loma Linda will reach 86. And while the American man lives until age 77, Loma Linda’s vegetarian Adventist males on average make it to 83.

But not everybody agrees that a vegetarian diet is longevity-enhancing. Earlier this year, a study comparing the health of Australians reported no difference in terms of life expectancy between those who ate meat and those who did not. Dr. Michael Orlich, lead researcher on the Adventist Health Studies II, believes this could have something to do with the motivations for choosing a vegetarian diet: moral versus health.

“Our vegetarians are a healthier-eating vegetarian group,” he explained. “In compensation [for abstaining from animal products] they eat increased amounts of a large variety of plant foods: more fruits, more vegetables, more nuts and seeds, more legumes, and more whole grains.”

Hepsie Gurusamy, an 86-year-old resident at a seniors’ housing facility Linda Valley Villa, became vegetarian six years ago for religious reasons. “[Adventists] are told that in the last days—and we believe these are the last days—the animals will be sick. And they are sick!” she exclaims. “They’re feeding them hormones, hay that’s sprayed with who knows what. If we eat them, we get sick too. Our body is a temple of God, right? And we have to keep it holy and healthy.”

The Adventists see good health as spiritually advantageous, but it appears that religion is simultaneously beneficial to health. All five Blue Zones are faith-oriented communities that prioritize prayer, meditation, and quality time with family members. For the Adventists, Saturday is the Sabbath, when they attend church service, take walks in nature, and hold neighborhood pot-luck dinners. Disconnecting from the internet and reconnecting with loved ones in this way is known as “downshifting,” and it forms one of nine key principles that Blue Zones LLC, Dan Buettner’s organization, is now attempting to roll out across the country in partnership with well-being improvement company Healthways.

Approximately 60 miles east of Loma Linda, a little south of Los Angeles proper, is a pretty stretch of coastline that encompasses the affluent communities of Hermosa Beach, Manhattan Beach, and Redondo Beach. Known collectively as the Beach Cities, this was the pilot location of the Healthways Blue Zones Project, which sought to provide the municipality with the funding and guidance to create Earth’s next official Blue Zone back in 2010. It was an ambitious and all-encompassing initiative that spanned the creation of new cycle lanes, “walking school buses” for kids, additional vegetarian recipes for local restaurants, and a conversational call line for the elderly, to name just a handful. 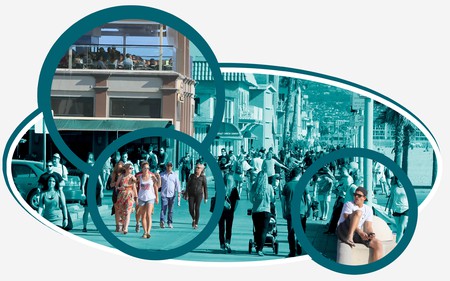 If the aim was to emulate the example set by Loma Linda, the pilot was a resounding success. Recent survey data collected by Gallup polls showed a 15 percent drop in obesity rates among Beach Cities residents; a 17 percent decrease in smoking; a 9 percent decrease in self-reported stress levels; and a nine percent increase in the number of residents exercising regularly (defined as at least 30 minutes, three times a week) since the inception of the project. Although it’s too early to tell if these improvements will equate to increased longevity, they’ve been significant enough to collectively earn the Beach Cities a Well-Being Index score of 65.9, outpacing all 190 metropolitan areas measured to officially become the healthiest place in America.

One of the ways the project successfully enabled these communities to stay active is by creating moais—a term for social support networks, coined by the Okinawa Blue Zone in Japan. One of these moais, the Birney Steppers, have been meeting twice a week for the last six years to share stories from their days and walk the Hermosa Beach shoreline. On the evening I joined four of its members, the weather was cool and gusty, but the ocean air and silvery moonlight felt like welcome respite from hours spent driving around LA in air-conditioned cars.

The Birney Steppers are a testament to the accumulative effects of small sustainable health improvements. Kathy Legler, 72, has come off blood-pressure medication completely and managed to cut her cholesterol medicine dosage in half. She’s about to embark on a hiking holiday to New Zealand.

Over a two-year period, Teri Cannon, 66, lost 35 pounds (16kg) and brought her cholesterol level back within a healthy range through a combination of diet (less meat, more plants), and regular walks. “My doctor always comments that it’s unusual for somebody my age to not be on any medication,” she says.

Mary Vassilakis, 57, who walks, does yoga once a week, and invests in regular sessions with a nutritionist, is the daughter of a mother from the Greek Blue Zone, Ikaria. “They grew up in villages … there was no junk food,” she explains. “There was a goat for milk and chickens for eggs. They walked everywhere, and they grew their own food—tended to their own olive trees.” 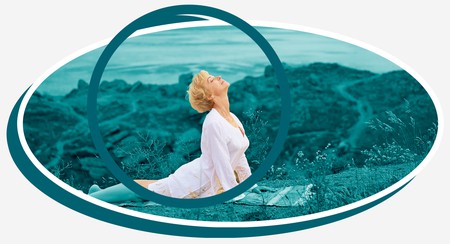 The Blue Zones’ Power 9 principles aren’t rocket science: eat mainly plant foods, move naturally and often, live life with a sense of purpose, downshift and de-stress, stop eating when you’re 80 percent full, drink alcohol regularly and in moderation, belong to a faith-based community, prioritize family, and find a tribe of friends who reinforce healthy habits. We’ve read or heard most of them, in various iterations, many times before, yet we can’t quite seem to assimilate the advice.

According to European research into the health and lifespan of identical twins, the factors that determine the age and cause of your death break down like this: approximately 25 percent is written in your genes, and a massive 75 percent is decided by your lifestyle. So while we will all certainly die, the when and the how is more within our control than most of us might have imagined. The secret to extending longevity is as simple as choosing common sense over convenience.