Everything You Need To Know About Lassen Volcanic National Park 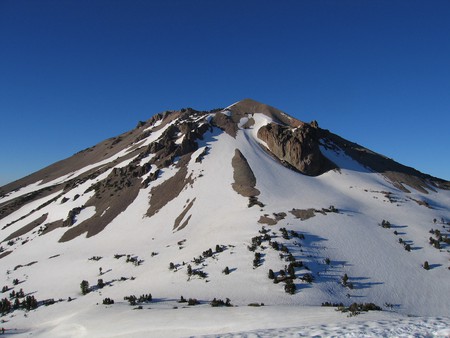 Boiling mud pots, pristine lakes and volcanic activity sound like a recipe for Yellowstone, but Lassen Volcanic National Park is a unique gem in its own right. With many of the same features found at world-famous Yellowstone, and a fraction of the crowds, this California park is primed for discovery.

As its name implies, Lassen Volcanic is a park with an explosive history.

Its centerpiece is Lassen Peak, a 10,457-foot (3,187.2-meter) volcano looming over the southern Cascade Range. The mountain also forms the heart of Lassen Volcanic Center, which began taking shape 825,000 years ago with a series of lava and ash flows that laid the foundation for a massive caldera. Lassen Peak and the surrounding mountains that comprise present-day Lassen Volcanic National Park didn’t emerge until the Lassen Stage of geological formation between 300,000 and 1,100 years ago. During this phase, another series of eruptions produced a field of plug dome volcanoes, so named for slow-moving lava that cools and seals the surface.

The peaks in Lassen Volcanic are still very much alive. Lassen Peak erupted in 1915, making it the only volcano in the Cascades to erupt after 1900 – apart from Mount St Helens. Though the eruptions were relatively small, the ash flows and glowing lava pouring out of the peak were a reminder of the region’s powerful geology. 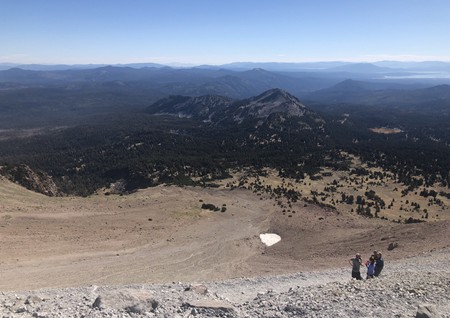 Visitors can hike to the top of Lassen Peak, which last erupted in 1915 | © Matt Kirouac

With soaring hikes, serene lakes and hydrothermal wonders, there’s plenty to explore at Lassen Volcanic National Park, and it’s easy to do thanks to the fact that fewer than 500,000 people visit annually. Compared to Yellowstone’s more than 4 million visitors, this is a place that feels like a hidden gem.

A hike up Lassen Peak is a great way to experience the park. It’s a steep, five-mile (eight-kilometer) round-trip excursion with about 2,000 feet (609.6 meters) of elevation gain. Along the way, the views get better and better, affording a vast panorama of the volcanic range and the forests and lakes that populate the region.

Kings Creek Falls serves as a beautiful example of just how diverse the landscape is in this dramatic land. The three-mile (4.8-kilometer) loop trail leads through a tranquil meadow and along a creek before culminating at a 30-foot (9.1-meter) waterfall surrounded by ferns. The mist pouring off the falls provides a living environment for lush vegetation not seen in the mountains, including lupines and lilies.

Manzanita Lake is another crowd-pleaser. In the northwest portion of the park, the shimmering lake sports an easy trail around the perimeter, and visitors can also rent kayaks or paddleboards to get on the water. It’s a great place to watch for birds, including bald eagles, and fish, specifically rainbow and brown trout.

No matter the vantage point, Lassen Volcanic National Park is a mountainous realm of sights, heights and smells. From its fuming thermal activity to the rocky apex of the world’s largest plug dome volcano, this is a park filled with discovery. 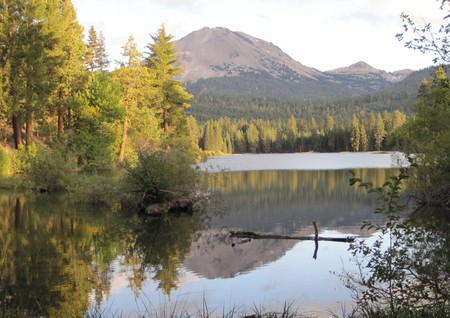 Lassen Peak soars over Manzanita Lake, a tranquil setting for hiking, paddle boarding and kayaking | © NPS
Give us feedback