L.A.’s “Museum of Selfies” Explores the History of Selfies 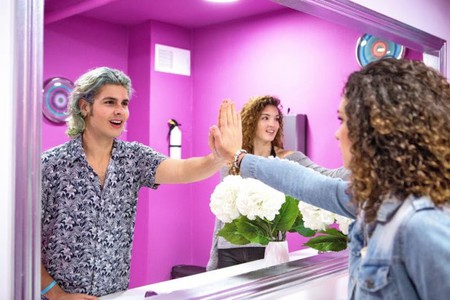 The Museum of Selfies, which opened on April 1, 2018, in Glendale, won’t judge if a guest simply must snap a selfie; indeed, that’s sort of the point.

Countless photo-friendly installations have opened in the Los Angeles area in the past several months, including Candytopia, The Museum of Ice Cream, and 29 Rooms. These exhibits essentially function like Instagram factories: get in, pose in front of or inside a visually spectacular backdrop, and then share on social media to the envy of all of your friends. Co-creators Tommy Honton and Tair Mamedov’s Museum of Selfies is an on-the-nose parody of such exhibits, while simultaneously being one of them.

Inside, guests will find a mix of photo backdrops and actual selfie knowledge, which includes a historical timeline of the selfie, from petroglyphs to present day. This is, of course, speaking liberally. Some inclusions are self-portraits, while others, like Leonardo da Vinci’s The Mona Lisa, is a portrait of someone else. In this particular section, guests can immerse themselves in a real-life replica of Van Gogh’s bedroom from his painting, Bedroom in Arles. As the exhibit progresses, another installation makes it look like guests are inside a 1920s black-and-white painting. 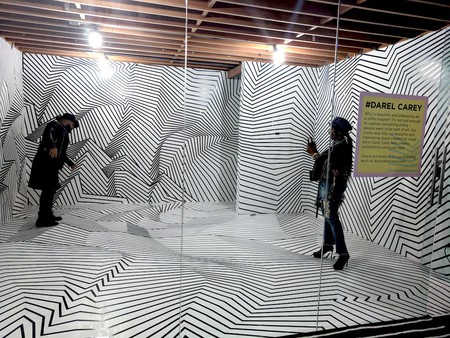 Elsewhere, placards discuss various types of popular selfies, with venues including the car, the gym, and the bathroom. A VW Bug plastered with mirrors serves as a photo station, as does a gym setting with funhouse mirrors and weights that look heavy, but are quite light.

Artist Colette Miller, the founder of the Global Angel Wings Project, provides a 3-D version of her often-Instagrammed street art wings made from painted tires, while an Iron Throne à la Game of Thrones made entirely of selfie sticks offers a critique on the battle for “social media dominance.” Artist Darel Carey created a room where zigzagging lines of black electrical tape on a white backdrop create a striking photo op, while artist Matt Elson’s Infinity Box allows guests to peer into a mirrored box and see their face reflected many times over. The museum also boasts a 90-foot (27.4-meter) selfie stick, which connects a tablet to a camera on a second-floor mezzanine.

Perhaps the cleverest installation pokes fun at the “bathroom selfie.” A bathroom with bright pink walls seems ordinary, until you realize that the mirror is absent. Instead, an identical bathroom sits opposite. Guests are encouraged to take photos high-fiving or posing in similar positions across from a friend, creating a curious illusion—or, if there’s no one there, acting like you’ve suddenly turned into a vampire.

Oops! An installation at the Museum of Selfies | © Juliet Bennett Rylah

Of course, the museum does highlight the possible danger of selfies. A screen keeping a running tally of selfie facts notes the number of people who have died trying to get the perfect shot, while another wall shows real signs warning guests not to selfie and drive or selfie on the edges of cliffs. Another installation features three statues: the first upright, the second tipping over, and the third shattered on the floor. This piece was inspired by The 14th Factory art exhibit, which opened in L.A. in 2017. During the show’s run, a woman posing for a photo accidentally tipped over several pieces of art, resulting in some $200,000 in damages.