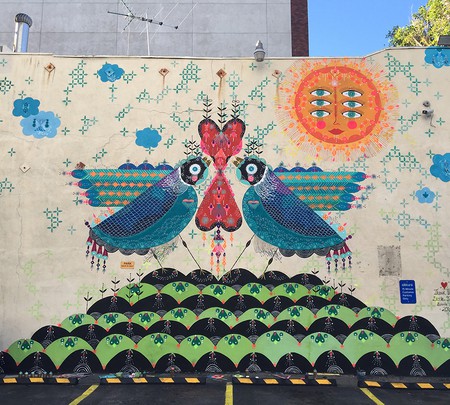 Mural in Little Tokyo Courtesy of the artist

Los Angeles muralist Bunnie Reiss sees walls as opportunities. In under a year, the artist has painted the town, with 14 murals to date and counting. After spending her formative years – artistically speaking – in the Bay Area, she has taken L.A. under a bright and colorful wing, covering the streets with fantastical geometric imagery, laden with nature magic and surrealist mythology. We caught up with Reiss over strong coffee in her Eastside studio where she mused upon her folk art influences, her secret to unlocking Los Angeles, and how artists can change the world for the better. 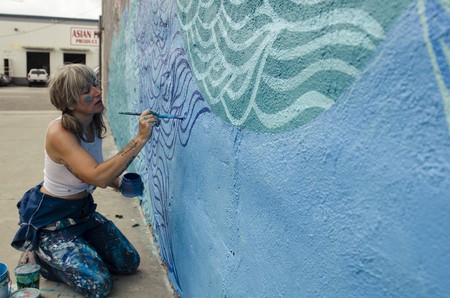 There is a lot of recurring imagery in your work. What inspires your motifs and your subject matter in general?

As I’ve gotten older, I’ve gotten more interested in my lineage and where I come from. My family is Eastern European Jewish, so I have a very heavy Russian and Polish folk art theme in my work. Polish folk art is saturated with bright color and Russian fairytales are full of magic, and a connection to animals and nature. And because I was raised in Colorado, with the blue skies and different colors of grass, flowers blooming— that vivid scenery also had an influence on me. I think the combination of those things has finally bubbled up to the surface. So much of art is about investigating yourself and your community.

Is your recent mural at Unique Space telling a specific story? What themes were you working with?

That piece is 120 feet, so it was a particular challenge. It’s about being in the boat that is your life: it might go back and forth; and at times the river will be so calm you can stand up in it because the water is so glassy; and this boat is attached to other boats because in the end, we’re all connected, pulling each other along the water. The only thing you can do is float down the river and just know you’re going to be safe because it’s not going to get easier.

I want people to feel good when they’re looking at my work, to simply have a nice emotional response. I don’t want to be an artist that is constantly force-feeding a heavy discussion down peoples’ throats. We have that every day. We’re inundated with fear, death, trash, dirt— every day. I really want to forcefully do the opposite.

You’re a multi-disciplinary artist, but it seems like your focus has re-calibrated towards painting these days.

Painting murals is my favorite thing to do. Mural painting has a real function in a community: it beautifies neighborhoods, shares stories, encourages people to interact and gather, helps people slow down their busy lives. Murals reach a large demographic because they’re accessible and free to everybody. The public has a right to beautiful things.

There are wasted spaces everywhere– that’s what’s brilliant about L.A. It is amazing to me how much space there is here. There is wall after wall after wall… you can spend a lifetime painting here.

What drew you to Los Angeles after being in the Bay Area for 14 years?

I noticed that artists were surviving here, but they were also doing really big things–big projects. This seemed like a place for larger thinking.

L.A. is in a renaissance right now— people are flooding here because there is no other city in the United States that is actually welcoming artists. It feels so electric. People are excited— excited about something and the fact that it hasn’t been defined is the most exciting part. I’m thrilled to be here and L.A. will be my home for quite a while.

The Bay is a remarkable place that teaches you about community. It’s a really intellectual, heady place— from the weather to the people to even the geographical positioning, being a weird sort of half-island. I was incubated as an artist there for a really long time, but that area is changing and it will take it a long time to recover. There’s a part of the Bay that doesn’t exist anymore—a wildness… But, my loyalty will always remain.

How is it different to operate as an artist in Los Angeles?

There is a loneliness in L.A. that’s contagious– it can eat you alive. When I first moved here, I had to start over. I went to a lot of art openings and I would meet people and they’d give me their business cards. They’d be really excited to meet me, but I would never see or hear from them again. Eventually, I thought, people like to eat together always, no matter what. So I started doing potlucks at my house and I’d invite some people I knew really well and some people I had just met that weekend. Nine out of ten times, the people I had just met would come to dinner. It was great cross-pollination.

You have to find community here and you have to work a little bit harder for it. That’s how L.A. is in general– if you show up here, it will show up for you. But if you think it’s going to come to you, you’re crazy. This is a city full of talented people trying to make it happen, and those who are making it happen are actually showing up for it. They are on time; they deliver above and beyond; they’re honest and compassionate. It’s a very easy place to be that, and it really works, but you have to put muscle into it. 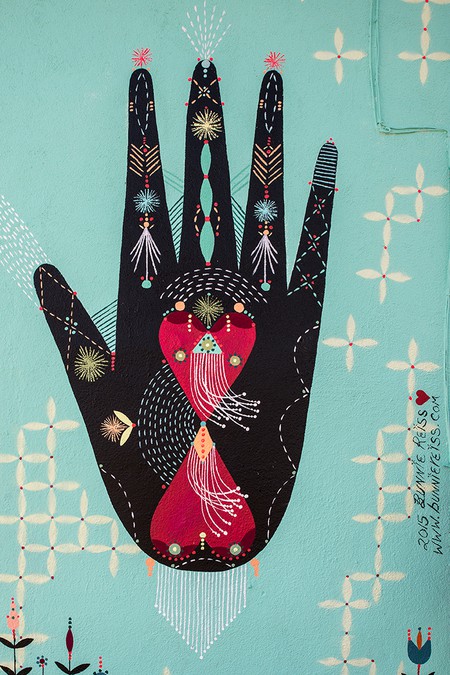 What advice would you give someone who wanted to be making a living from their art?

They should get a job and not make a living from their art for a long time. I think social media and the internet has taught young artists that there’s some kind of easy road. I love the idea of making a living off of your art, but it takes a really long time. There’s a process that you have to enjoy as you make your work, and you really cut yourself off if you’re just pushing to pay your bills with it. Enjoy the process, enjoy yourself— take a day to go to Death Valley, take a day to go the hot springs, talk to your friends, have dinner with people— enjoy your life no matter what you do, because it’s short. And don’t rack up too much debt.

I get up at 6am. I get to the wall by 7am. I put in my headphones and I paint super duper hard until 1pm. Then I have a little lunch, sit for 20 minutes and get up and start painting again. Usually in the afternoon, people stop by to say hi– it’s nice to have a visit from a friend. And then I paint until dark. When I get home, I take a shower and eat a little food. Then, I get into bed and do work emails until 9 or 10pm. And then if I’m lucky, I fall asleep to some kind of silly program. Sometimes I can muster going to an opening or doing something social, but I have to stay incredibly focused and I have to work 12-15 hours a day. I wouldn’t have it any other way. I’m the happiest I’ve ever been. 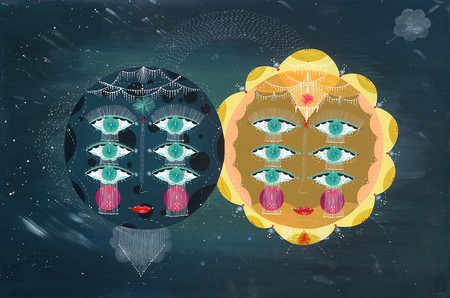 "The Parents" from The Cosmic Child collection. Courtesy of the artist.

Who of your artistic contemporaries are you most inspired by?

There are so many.

Miss Van–I’ve been watching her work for years. I love her female characters and how they’ve developed. There aren’t a lot of women working on the streets painting murals and she’s been at it working so hard for so long. And she’s a sweet, humble person— I really look up to people like that.

I love Mark Ryden’s paintings. I’ll never get over how much they slay me. His mythical, baroque style and rococo colors make me happy and excited. Any time I can, I go out of my way to see his work.

And I will always admire Swoon for taking the idea of being an artist and moving it to a space of pure humanitarian work that is smart and compassionate. She’s showing young people that being a successful artist can effect the world in a positive way that will last for generations. Her work is amazing, but what she’s doing with it is really powerful.

What do you think the role of an artist in society is?

A long time ago, a professor told me that being an artist is one of the most important jobs you can ever have. When you actually look back in history, you realize how important it is because artists communicate the perception of being a person in the world in a visual manner. For generations to come, that perception will be dissected and lead to political conversation and emotional conversation, it will lead to other artists and ideas and movements, and collective consciousness. When the country is in a state of fear or in a state of joy, when it’s in a state of emotional upheaval, when there’s war– we are collectively reacting to it. Artists express the human condition. Our role is as important as a doctor’s or a lawyer’s or an educator’s.

Everybody has an important role in this world. People aren’t told enough that what they’re doing is good –’You’re doing a really good job!’ It’s a very hard world, and we don’t have to be so hard on each other. Continue on the positive route. Ride your bike at 5am, give your neighbor a hug, ask a stranger how their day is going. It takes two minutes a time. 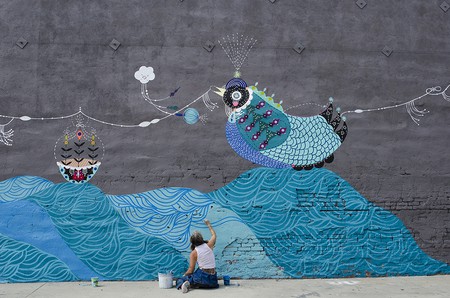 © Marnie Sehayek
Give us feedback