L.A. Is Officially the Most Vegan-Friendly City in America 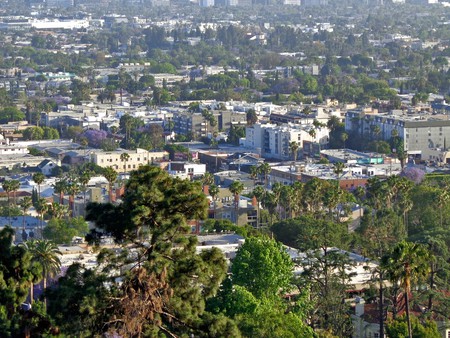 On May 15, 2018, PETA (the People for the Ethical Treatment of Animals) declared Los Angeles the “Most Vegan-Friendly City” in America for 2018.

To ring in the occasion, award-winning musician, restaurateur, and vegan Moby officiated a special soiree at Little Pine, his vegan restaurant located in Silver Lake. One of the first cities in the U.S. to embrace vegan dining on such a large scale, the “City of Angels” boasts thousands of vegan restaurants, unique vegan events and festivals, and opportunities for animal rights activism.

From the upscale celebrity hot spot Crossroads to the locally sourced dishes of Plant Food + Wine, there is a vegan dish for every taste and mood in Los Angeles. Cruzer Pizza in Midtown offers a vegan twist on a classic favorite. For a taste of Asian flair, stop in at the Bulan Thai Vegetarian Kitchen, or try the curry udon stir fry at Vinh Loi Tofu. Follow the unique pop-up Cena Vegan to its next location for the best vegan street food in the city.

There are also plenty of options for the indulgent vegan or timid first-timer. Satisfy a sweet tooth with vegan ice cream from Magpies Softserve, or build your own vegan doughnut at Donut Friend. With plates like fried avocado, mac n’ cheese or a peanut-butter-and-bacon sandwich, Doomie’s Home Cookin’ on Vine St. is a perfect place to bring your non-vegan friends for a satisfying sit-down.

Many vegans aren’t in it just for the food—the practice of veganism is rooted in protecting all living creatures. Los Angeles is home to many of the top anti-animal-cruelty organizations dedicated to the preservation of animal welfare.

Mercy for Animals, located on Sunset Blvd, is a top contender in the fight to protect farmed animals. A voice of compassion against the cruelty behind factory farming, they are the world’s leading farmed animal rights and advocacy group. L.A.’s branch of The Save Movement is a worldwide network of people bearing witness to farmed animals. They strongly advocate veganism and a love-based grassroots form of activism.

The 2018 Animal Rights National Conference is taking place in Los Angeles and is the world’s largest and longest-running animal rights gathering. The Official Animal Rights March L.A. is back for its second year, meeting on Beverly Blvd on August 25, 2018. With origins in London and put on by the animal rights organization Surge, they are looking to double participation from last year’s 800 activists.

Beyond the vegan-friendly restaurants and animal activism, L.A. hosts a variety of vegan-oriented festivals and events. Located at the Rose Bowl, Eat Drink Vegan is a plant-based marketplace showcasing over 500 vegan restaurants, vendors, and craft pours. Vegan Street Fair Los Angeles (VSF) is an all-ages, free-entry vegan fair located in North Hollywood and boasts the best of local vegan cuisine. For those seeking to curb the crowds in a more relaxed atmosphere, VSF offers a late-night 21+ boutique event called VSF: LA Nights.

For more information on eating vegan, check out the videos below: