Kurt Wenner: Classical Street Art for the Pope and Greenpeace 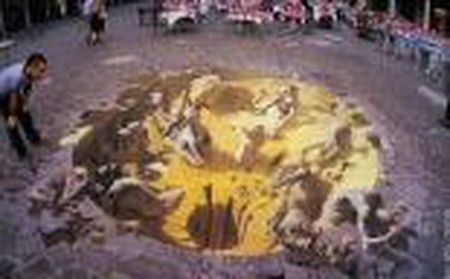 A career that has taken him from NASA to Italy and subsequently all around the world, Kurt Wenner combines the anamorphic skills of classical renaissance artists, with the contemporary medium of street art. 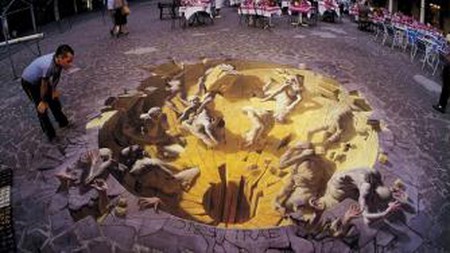 Kurt Wenner has had an extraordinarily varied career to say the least. After attending Rhode Island School of Design and the Art Center College of design, he worked for NASA as an advanced scientific space illustrator. However in 1982, Wenner left NASA to pursue his primary love of classical art. He states that his interest in Renaissance classicism began simply with the desire to draw well. He noted that the way in which artists drew 500 years ago far surpassed that of 20th century artists and teachers in terms of technical skill. Wenner therefore endeavoured to master drawing and painting within the realms of Western classicism, meanwhile isolating himself from 20th century art in order to totally immerse himself in the ideas and practices of the Renaissance period. Since then, it has become Wenner’s ongoing mission to rediscover classical traditions, communicating them to a contemporary audience. 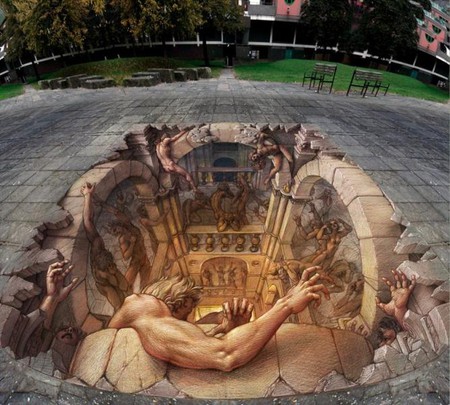 In 1984, Wenner invented his own art form that has since become known as anamorphic or 3D pavement art. This method is based on a form of perspective known as anamorphism that was used by the great European Masters to give the illusion of architecture and figures in ceiling frescos. Essentially turning the geometry of the compositions upside down, the art forms a new geometry to create images that appear to rise out of or fall into the ground. Traditionally, anamorphic perspective painted forms are perceived properly when viewed from a specific point, however Wenner’s geometry corrects the specific distortions that are encountered in viewing his large images from an oblique angle. This type of geometry has indeed become known as ‘Wenner’s hyperbolic perspective’. 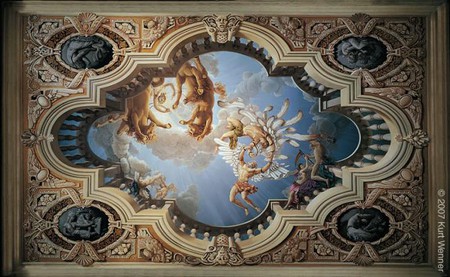 The majority of Wenner’s painted work has been done on commission; during his years abroad he created some highly classical works including altarpieces, family chapels and even an entire ceiling fresco measuring 6,000 square feet for the church of St. George near Lake Como, Italy. This work harked back to the Mannerist work executed in the High Renaissance period, during the 16th century. However these are not the only large scale permanent pieces in Wenner’s repertoire. Highly sought after, his work can also be found in corporate lobbies, hotels, museums, churches, government buildings, and private homes. 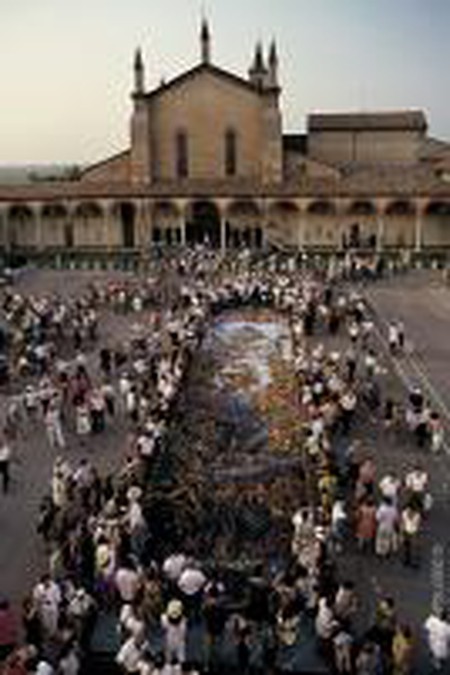 In 1990, Pope John Paul II visited the city of Mantua, Italy, and to mark the occasion, Kurt Wenner was commissioned to create an original composition based on the Last Judgement. The street painting was 15 feet by 75 feet, and was created over a stretch of ten days. Under the guidance and direction of Wenner, 30 of Europe’s best street painters worked solidly to complete the masterpiece. On the last day, Pope John Paul II signed the mural and thus officially sanctioned pavement art as an official form of Sacred Art. 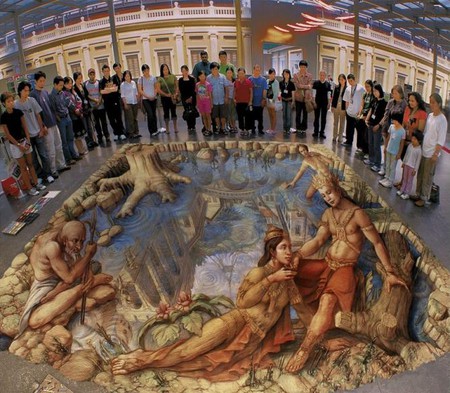 Iksandr, the Last King of Singapore

Created for the National Museum of Singapore for its reopening in 2006, ‘Iksandr, the last king of Singapore’ is an example of some of Wenner’s finest work. A narrative scene that depicts Parameswara, also called Iksandr Shah, who was the last king of Singapore and fled after a naval invasion in 1398. Little is known about the true history, but in legend it was said that he had a favourite consort of whom the other consorts were jealous. The narrative therefore depicts an aspect of this legend. Wenner took two weeks to sketch the draft but only 5 days to create the final piece, measuring 5.6 by 2.6 metres. 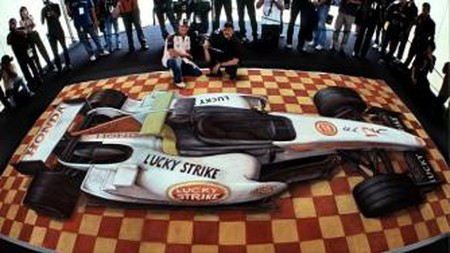 The bold and graphic nature of Kurt Wenner’s work lends itself perfectly to advertising, and a number of his commissions have been for product advertising such as for cars or food products. The 3D nature of the work is perfect to create eye-catching images that attract passers-by. 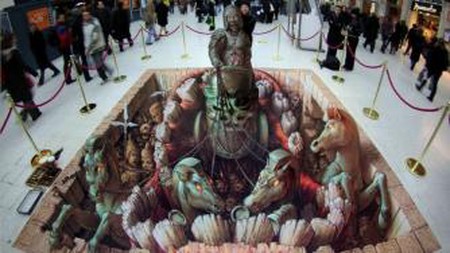 Wenner has also lent his talents to the film industry, creating eerily life-like pieces for films such as The Mummy at Waterloo Station, London. In addition to advertising a product or a film, these commissioned pieces are also bringing recognition to the art form given the public nature of the works. Often executed in areas with heavy footfall, more and more people are thus being exposed to anamorphic street art. 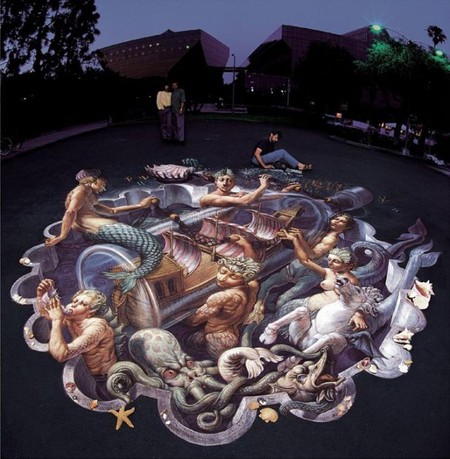 Wenner’s form of anamorphic art combined with a successful National Geographic documentary inspired many communities to create their own street painting festivals. One of the biggest and best known street art festivals is the ‘Absolut Chalk Street Painting Festival’, which has been held every June since 1992. Co-sponsored by Absolut Vodka and the Light-Bringer Project (a local non-profit arts organisation), the festival has grown to be one of the largest of its kind around the world. Professionals and amateurs alike create chalk illustrations on the pavements, for which prizes are awarded in a number of categories. 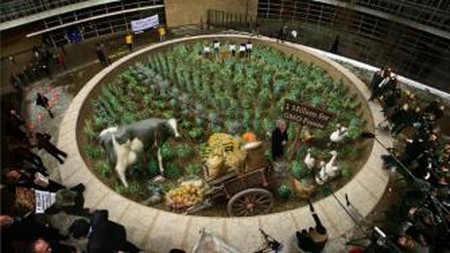 In addition to permanent works and advertising commissions, Wenner uses his inexhaustible talent to promote both good causes and important political issues. One such work was his piece for the Greenpeace petition against GMO, or GM Crops as they’re often known. This vast circular piece also contained the one million signatures on the petition against GMO, and was the first petition to be considered a ‘citizens’ initiative’. Wenner’s work utilises his anamorphic style to depict crops and livestock, as well as figures petitioning against GMO crops. An important work for Wenner, it shows how art can be used to strengthen a cause. 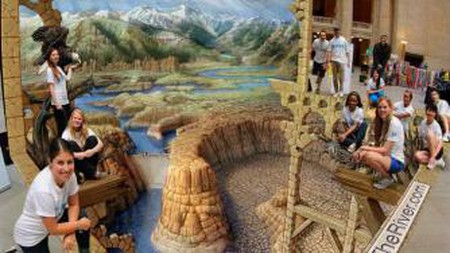 As recently as June 2013, Wenner has been involved in a project entitled ‘Reunite the River’ based around the Colorado River. The mural was to promote the initiative which is looking to donate water back into the river, which at one point reached the state of California, but no longer does. Executed in Chicago, the mural depicts an idyllic scene of the river winding its way through the landscape in the foreground, and shows a point where the river has dried out. In collaboration with ‘Silk’ soya products, ‘Reunite the River’ wishes to alter the landscape for the better, boosting eco systems and the development of natural habitats.