Kendrick Lamar Finally Answers Who 'HUMBLE.' is About 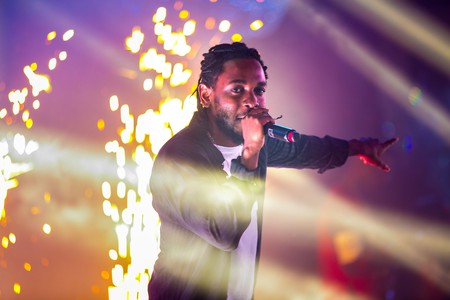 For being the most talked about rapper alive, it’s very rare that we hear Kendrick Lamar share his own thoughts outside of his own music.

However, Rolling Stone published their cover story with the DAMN. artist covering a wide range of topics from his ideal juice mixture (“a little kale, apple, spinach. Shit good.”) to who exactly he is talking about when he says, “Be humble / Sit down” on the album’s leading single.

Unsurprisingly, it isn’t some conjured nemesis (Drake). It’s himself:

“Definitely. It’s the ego,” Lamar says. “When you look at the song titles on this album, these are all my emotions and all my self-expressions of who I am. That’s why I did a song like that, where I just don’t give a fuck, or I’m telling the listener, ‘You can’t fuck with me.’ But ultimately, I’m looking in the mirror.”

Lamar also provided insight into how the track was crafted, stating that he believes Mike WiLL Made It’s provided production “feels like my generation.”

“It was the beat first, actually. [Producer] Mike Will sent the beat over. All I could think of was [Marley Marl’s] ‘The Symphony’ and the earliest moments of hip-hop, where it’s complex simplicity, but it’s also somebody making moves. That beat feels like my generation, right now. The first thing that came to my head was, ‘Be humble.'”

Check out a few more of Kung Fu Kenny’s excerpts from the interview below, and make sure to head over to Rolling Stone to read the full conversation.

On the importance of having his dad present during his childhood:

“It taught me how to deal with [pauses] … emotions. Better than a lot of my peers. When you see kids doing things that the world calls harmful or a threat, it’s because they don’t know how to deal with their emotions. When you have a father in your life, you do something, he’ll look at you and say, “What the fuck is you doing?” Putting you in your place. Making you feel this small. That was a privilege for me. My peers, their mothers and grandmothers may have taught them the love and the care, but they couldn’t teach them that.”

On why he rarely ever talks about Donald Trump:

“I mean, it’s like beating a dead horse. We already know what it is. Are we gonna keep talking about it or are we gonna take action? You just get to a point where you’re tired of talking about it. It weighs you down and it drains your energy when you’re speaking about something or someone that’s completely ridiculous. So, on and off the album, I took it upon myself to take action in my own community. On the record, I made an action to not speak about what’s going on in the world or the places they put us in. Speak on self; reflection of self first. That’s where the initial change will start from.”

On whether it is ever acceptable to use a ghostwriter:

On his collaboration with Bono:

We had a [different] record we were supposed to be doing together. He sent it over, I laid some ideas to it, and we didn’t know where it was going. I just happened to have an album coming out, so I just asked him, like, “Yo, would you do me this honor of letting me use this record, use this idea that I want to put together because I’m hearing a certain type of 808, a certain drum to it.” And he was open to it.

… Bono has so much wisdom and so much knowledge, in music and in life. Sitting on the phone with him, I could talk to him for hours. The things he’s doing around the world, of just helping people, is inspiring.