Is Silicon Valley Headed for a Social Reckoning?

In the mid-1990s, on the tree-lined campus of Stanford University, a small group of young men created an artificial intelligence that would, in their view, contribute to the profound betterment of society.

In the decades that followed, with Stanford as its academic and cultural nucleus, Silicon Valley and its mostly-male innovators created not only AI, but a hyper-individualistic, libertarian ideology that has metastasised into a social wrecking ball – or so argues former New York Times columnist Noam Cohen in his new book, The Know-It-Alls: The Rise of Silicon Valley as a Political Powerhouse and Social Wrecking Ball (New Press).

Through portraits of tech titans from Amazon’s Jeff Bezos to PayPal’s Peter Thiel, Cohen chronicles the making of Silicon Valley, proposing that the so-called ‘know-it-alls’ who created it have come to have an outsized and damaging influence on American culture, economics and politics.

‘In The Know-It-Alls, I look at the history of how we got here, and show that there were pivotal moments when Internet culture could have taken a turn for the better,’ says Cohen in a phone interview.

The author argues that two narratives transformed Silicon Valley’s promise into a model of ‘unthinking commercialism’ – an ‘unholy alliance between a hacker’s radical individualism and an entrepreneur’s greed’, and a commitment to ‘hyper-individualism’.

The know-it-alls ‘fell in love with, and then mainstreamed, radical individualism and libertarian capitalism,’ says Cohen. They ‘propose a society in which personal freedoms are near absolute and government regulations wither away, where bold entrepreneurs amass billions of dollars from their innovations and the rest of us struggle in a hypercompetitive market without unions, government regulations, or social welfare programs to protect us,’ he writes in the book. 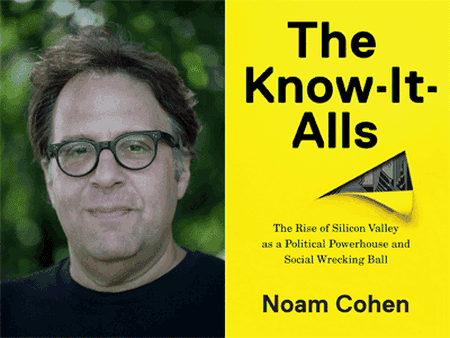 The ideology is compounded by a dangerous overemphasis on reason and logic over humanness. ‘In the digital spaces where the know-it-alls act, there’s this hacker’s idea that there’s a world that you’re creating, and you make your own rules,’ says Cohen. ‘But they don’t see themselves as part of the real world, or historical record, or a world where there is a history of things like racism and sexism.’

Instead of confronting those issues, argues Cohen, the techies ‘hide behind meritocracy’.

‘There’s this well-known Silicon Valley startup that has a big rug with the word meritocracy on it that they were very proud of,’ says Cohen. ‘And people would come in and be very offended by it. And they were like,”How can you be offended by meritocracy, we’re saying that we hire the best, and the best succeed, and it’s awesome.”‘

‘But the obvious implication is that that mean you think the world you have now is correct – and that there are very few women or minorities in these jobs because they couldn’t hack it. And that’s wrong, and so offensive. But to them, they just thought “We’re just taking this great idea, and we’re proud of it.” And that’s one example of how you can’t see your own blindspots. The lack of self-questioning is really vital.’

Cohen says he thinks the know-it-alls believe in the now-clichéd Silicon Valley mantra that their startups are all ‘making the world a better place’. ‘I think for techies it was, and still is, very tempting to think that they’re creating a utopia in cyberspace,’ says Cohen. ‘They like to pretend making money doesn’t matter to them. Clearly it does.’

Moving forward, Cohen advocates for stronger regulation. ‘I don’t think these companies are going to do it themselves, and I don’t think that the public will demand it. A lot of books that have been written recently ask the public to hold these companies to account – “value your time more,” and things like that. Well, that doesn’t work with tobacco either. But I resist the argument that it’s all inevitable,’ he says.

‘I like to think that there are periods along the way, and there will be periods in the future, where we can choose a different path. I’m pinning my hopes on there being some kind of shift election. Maybe I’m naive, but I like to think that things can be less commercialised, and we can have rules. There’s got to be some recognition that something’s got to change. And I think it’s on the horizon.’

Noam Cohen’s book, The Know-It-Alls: The Rise of Silicon Valley as a Political Powerhouse and Social Wrecking Ball, is available now.