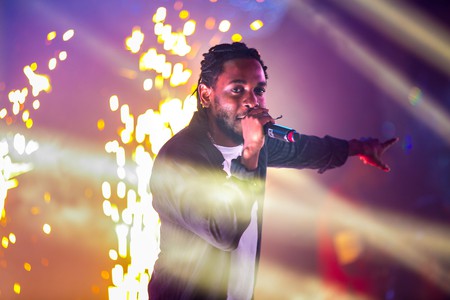 EDIT: Kendrick Lamar has released his first single of 2017, “The Heart Part 4,” a nearly five-minute track that details how Lamar’s life is entering a new phase and warns the competition to take a step back. Lamar closes the track with the line, “Y’all got ‘til April the 7th to get y’all shit together,” most likely alluding to the release of his fourth studio album in two weeks.

It’s expected that Kendrick Lamar’s follow-up to 2015’s To Pimp a Butterfly would drop at some point in 2017, but it appears that the Compton rapper’s new album will arrive sooner than later.

It’s not very often that Lamar takes to social media — he has only tweeted six times since the start of the year, and five of them were retweets — but on Thursday morning, he removed everything from his Instagram account and posted a picture with the Roman numerals “IV” and no caption:

Considering this will be Kendrick’s fourth studio album, we can only assume this post is alluding to its imminent release, or at least the release of its first single. The same image was also shared by renowned producer The Alchemist on his Twitter, leading to some speculation that the duo will collaborate on the record, but it was soon after removed.

The first details, albeit in minimum, of the new album arrived at the top of March in a T Magazine profile, Lamar calling the album “very urgent.”

“I think now, how wayward things have gone within the past few months, my focus is ultimately going back to my community and the other communities around the world where they’re doing the groundwork. To Pimp a Butterfly was addressing the problem. I’m in a space now where I’m not addressing the problem anymore. We’re in a time where we exclude one major component out of this whole thing called life: God. Nobody speaks on it because it’s almost in conflict with what’s going on in the world when you talk about politics and government and the system,” Lamar told T.

When asked to describe what urgency sounds like, Lamar provided the following explanation:

It’s nearly impossible to predict the rollout process of Lamar’s label, Top Dawg Entertainment, often dropping albums at random with no hype whatsoever, so we will just have to wait and see how this Instagram overhaul develops. If a new track or album doesn’t arrive by Friday, we will at least get a little new Kendrick via Mike WiLL Made-It’s Ransom 2.