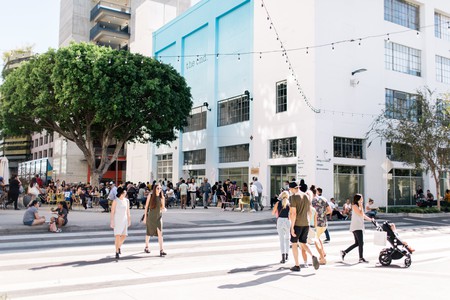 Beyond the glitz of Beverly Hills, the hotspots of West Hollywood, and even the hipsters of Silverlake is Los Angeles’ art district. Right in the heart of DTLA is an emerging hub of artists and their spaces—replete with an Urth Caffé, a Blue Bottle Coffee, and now an emerging outdoor space that will rival all of Los Angeles’ most iconic walking streets.

This is Downtown Los Angeles’ The Row. Now-branded as Row DTLA, this massive outdoor development of boutique stores, restaurants, coffee shops, and food trucks sits amid a renaissance bigger than the art district itself—Row DTLA is exploding in growth, and is the most noteworthy neighborhood in Los Angeles this year.

The space now called The Row was built between 1917 and 1923 along the Southern Pacific Railroad. Originally known as the L.A. Terminal Market, its roots and history were that of a produce market. The Terminal Market itself was an offshoot of earlier vegetable markets in the area, like the Hughes Market, which opened its stalls in 1901. When traffic grew and infighting got out of hand, the Los Angeles Market Company stepped in to develop the Terminal Market, designed to accommodate more people and even automobile traffic.

Renowned L.A. architect John Parkinson oversaw the project and expanded it through 1923, eventually constructing a massive campus of buildings and warehouses that spanned 30 acres along the Southern Pacific Railroad. This district is still known to Angelenos as Alameda Square.

With a skyline like this, we may never come back down. #ROWDTLA

“It’s really one of the most beautiful formal spaces on the West Coast, with a symmetry that could be a courtyard in Paris,” Row architect Mark Rios told the Los Angeles Times. “When I first saw it, I was blown away by the scale of it. I just thought it was amazing.”

With such praise, developers seamlessly pegged this space for the Row. The six buildings in Alameda Square, originally built to house offices in upper levels and warehouses for produce on the first floors, are now reimagined as a massive complex. The space currently houses retail shops, restaurants, and creative offices.

With a historic status and critical value to the residing arts community, the team tasked with this redevelopment took all concerns into account. From the start, developers planned to retain as much of the original look and feel of the area as possible.

“I told Jeffrey [A. Goldberger, principal at Atlas Capital Group, which developed the project] that what he had was such a gem, he had to be really careful not to ruin it,” Rios explained to the LA Times. “We really thought a lot about what happened in those buildings and how we could honor them while at the same time making places for all these new industries.”

While praise for the development of Row DTLA runs steady, many question and critique its intrusion into the community. A relatively autonomous neighborhood, the art district is home to low-income residencies and even office spaces. With spaces traditionally used as warehouses, residents have protested several renovation attempts that are causing local rents to skyrocket, pricing artists and other district residents out of their homes and work spaces.

The issue extends past just Row DTLA, as community boards took stances on multiple local developments that resulted in their termination, in an effort to remain as un-gentrified as possible. Local community leaders provide open doors to discuss potential new developments within the neighborhood.

Nevertheless, those community leaders are intent on moving forward with projects that will invigorate the community, and many hope that Row DTLA is one of those projects.

Row DTLA is currently open for business, but still growing as storefront continue to rent to different local and international brands and business owners. But, there are still highlights to visiting the budding complex, including the following:

The Row’s 10-story, 4,000-space parking garage includes a rooftop garden with unmatched views of DTLA. Go at sunset and be ready to Instagram.

Also on a spectacular rooftop garden, The Row invites Angelenos to marry the soothing view with a calming yoga session. Bender blends yoga and wellness with music, art, and culture.

Flow with the city at ROW & @bender.flow

Make your weekend a weekend well spent by digging in with your nearest and dearest at @smorgasburgla.

Residing in the heart of LA’s arts district, The Row is covered in murals, backdrops, and paintings commissioned by local artists. The campus corners offer a variety of Instagram bait to the more art-inclined visitors.