How to Spend a Week in San Francisco 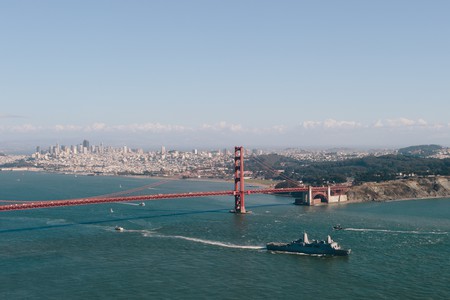 San Francisco is a city small in size at just seven miles wide by seven miles long. But, despite its compactness, there are countless sights to see and many years of history to take in. Here you’ll find an itinerary for seven days in The City by the Bay that will quickly have you planning your next trip back.

Take a walking tour around downtown

The best way to get acquainted with San Francisco is on foot and there are many free walking tours offered throughout the city. Free Tours by Foot offers tours of Downtown San Francisco, which includes the waterfront Ferry Building, the history of the 1906 earthquake and subsequent rebuilding, the historic Palace Hotel, and hidden parks of the city. The variety of other location options (including Nob Hill, Chinatown, and the Castro) allows you to choose the primary area based on your interests.

Eat lunch at the Ferry Building

After getting your bearings downtown, head back to the centrally located Ferry Building. Situated on the Embarcadero, a stretch of waterfront well-populated with joggers, tourists, and post-work happy hours, the Ferry Building is a San Francisco landmark, with its clock tower visible from Market Street, a main thoroughfare. Some of San Francisco’s best restaurants, artisanal goods and souvenirs can be found at the Ferry Building – arrive hungry and be prepared to sample a range of items.

A notoriously crowded public square in the heart of San Francisco’s downtown, Union Square is home to the city’s biggest shopping center. While an extended stay in Union Square is generally tiring, the area has major department stores, art galleries, boutiques, and souvenir shops. The Greek-goddess topped Dewey Monument in the center of the square is an ode to the Spanish-American war and the painted heart sculptures at the four corners of the square are inspired by Tony Bennett’s ballad ‘I Left My Heart in San Francisco’. 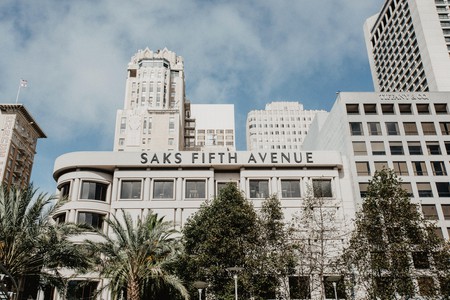 An entire morning could be spent exploring North Beach, the home of San Francisco’s Little Italy and several major city icons. City Lights Bookstore and Publishers was a key location for the Beat Generation that thrived in San Francisco in the 1950s. Today it’s a cherished city landmark, a bustling bookstore that publishes many local authors, and great spot to browse for books and souvenirs. Right off Washington Square Park in the center of North Beach are a number of Italian cafés and restaurants, perfect for a cannoli or espresso stop. Try Caffe Roma or Cavalli Cafe for an authentic taste of Little Italy.

Perched on Telegraph Hill in North Beach is Coit Tower, a 210-foot tall structure that has been a distinguishing feature of the San Francisco skyline since the 1930s. Visitors can take an elevator to the open-air observation deck that offers unbeatable views of the city and surrounding area. Another feature of Coit Tower is the Great Depression-era murals at the base that depict scenes of life in San Francisco and political commentary of the time. The highest part of Telegraph Hill’s Filbert Street leads you up a staircase flanked by lush vegetation and bohemian homes – look for the famous parrots that have been known to squawk at visitors.

Take an after-dark tour of Alcatraz

Sitting on an island in the middle of San Francisco Bay, Alcatraz was an early military fort turned maximum security prison in the mid-20th century. Nowadays, tours operate to and from the island regularly, transporting visitors by ferry (which also serves as a prime spot for pictures as you travel across the Bay). The Alcatraz night tour in is a good way to avoid the crowds of the day while experiencing the prison in a rather spooky setting – the tour offers both individual audio guides and group guided tours. Book in advance for tickets. 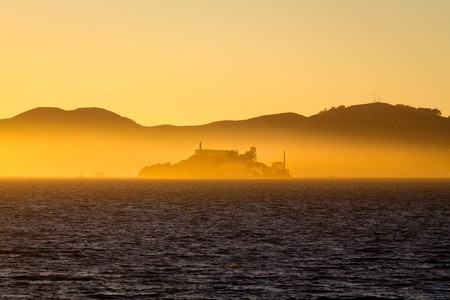 San Francisco’s largest park, Golden Gate Park, is a must-see that runs through the center of the city and has several notable attractions. Inside, you’ll find the San Francisco Academy of Sciences, which is a natural history museum with a planetarium, aquarium, and rainforest exhibit. Across the street, the de Young Museum of Art offers a more sophisticated experience with American, African, and Oceanic art, plus an extensive collection of sculptures. A stroll through the pagodas and lush flora of the nearby Japanese Tea Gardens, built in 1894, is a soothing experience.

At the eastern end of Golden Gate Park sits Haight-Ashbury, the counterculture neighborhood made famous by the influx of hippies during the 1960s. Haight-Ashbury is the spot for vintage shopping; the numerous clothing, costume, and record stores are all odes to the ‘flower power’ days of Haight Street. Check out the colorful Victorian homes of the neighborhood and the picture-worthy dangling legs of Piedmont Boutique. 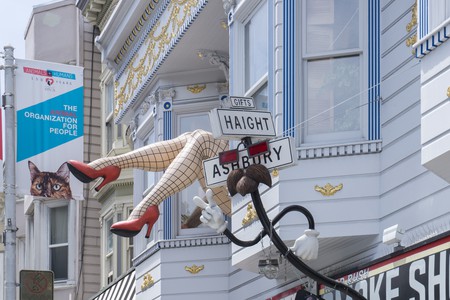 Explore the Marina and Fort Greene

The Marina neighborhood offers both easy access to some of San Francisco’s major sights and a charming atmosphere for a relaxed afternoon. Often populated with Lululemon-clad residents heading to a local juice press, both Union and Chestnut Street are perfect spots for leisurely popping into upscale boutiques or grabbing lunch at organic eateries. Easily walkable from the Marina is Fort Greene, an expansive palm-tree-dotted park, and Crissy Field, a popular spot for admiring the waterfront mansions along the marina that leads to the Presidio.

Bike across the Golden Gate Bridge

From the Marina, you’ll have easy access to one of the most iconic bridges in the US. The best way to venture across the Golden Gate Bridge is to rent bikes at Golden Gate Bike Rentals in Crissy Field. Along the bridge are clearly marked walking and biking paths with several lookout spots along the way for pulling over to snap photos. The experience is exhilarating, though windy; dress for colder temperatures, no matter the season, and exercise caution around pedestrians and other traffic. 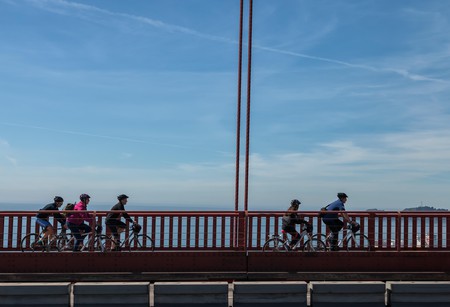 Across the bay from San Francisco is Sausalito, a sleepy waterside town with colorful homes stacked against the hillside like a Californian Positano. The slower pace of life in San Francisco’s smaller sister town is a nice respite from the buzz of the big city. Barrel House Tavern is a superb choice for dinner – floor-to-ceiling windows (plus balcony seating) allow for gazing at a lit-up San Francisco while enjoying classic Californian cuisine and craft cocktails. 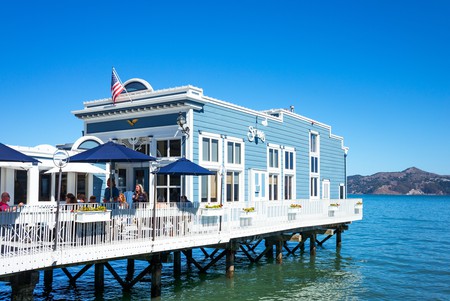 A restaurant on stilts in the waterfront of Sausalito. | © giuseppe masci / Alamy Stock Photo

With some of the best views in the city, Nob Hill is one of San Francisco’s most expensive neighborhoods. But for those not looking for real estate, it’s an ideal spot to explore historic hotels and ride a cable car down famously steep hills. Grace Cathedral looms over Nob Hill with its Gothic architecture and hidden backyard labyrinth while across the street Huntington Park is a quiet green space with locals going about their daily routines of dog walking and tai chi practices. Catch the cable car in front of The Fairmont (peek inside for a glimpse of the famously ornate lobby) or order a drink off the extensive martini menu at The Top of the Mark across the street at the Mark Hopkins. 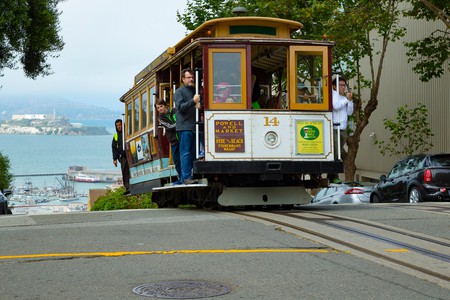 Though it won’t take you long, a visit to Lombard Street should be on every visitor’s list — the crookedest street in the world is another signature spot emblematic of San Francisco’s uniqueness. If you’re on foot, use the sidewalk to descend for a picture at the base. From there, head down to Ghirardelli Square, a chocolate factory turned shops and restaurants complex adjacent to Fisherman’s Wharf. Enjoy wine tastings at Wattle Creek Winery and Tasting Room, dinner at McCormick & Kuleto’s Seafood & Steaks overlooking the bay and, of course, end with a chocolate sundae at The Original Ghirardelli Chocolate Manufactory. 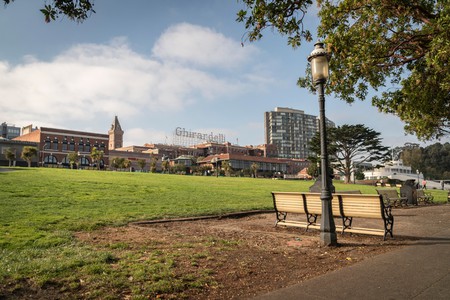 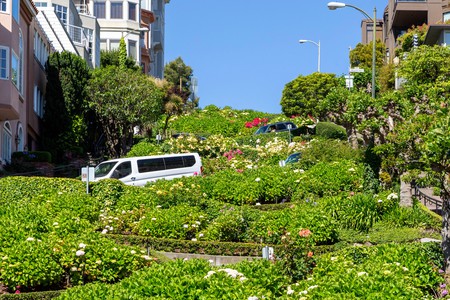 With rainbow flags flying high and an inclusive spirit that emanates from every street corner, The Castro has long been a hotspot for both LGBTQ nightlife and, on a larger scale, the gay rights movement in America. Catch a movie at The Castro Theatre and visit the LGBT Museum while you’re there. Nightlife in the Castro is a scene of its own – Twin Peaks Tavern, a neighborhood classic, and the open-air balcony at The Lookout are two solid choices for a night out in the Castro. 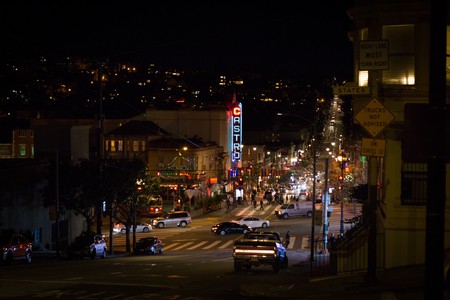 Go up to the top of Twin Peaks for views

Perched high above the city are two 922-foot hilltops known as Twin Peaks that offer 360-degree views of both San Francisco and the Bay Area. The peaks are accessible by car or on foot – the trailhead is about an eight-minute drive or, if you’re feeling adventurous, a 45-minute walk from Market Street in the Castro. 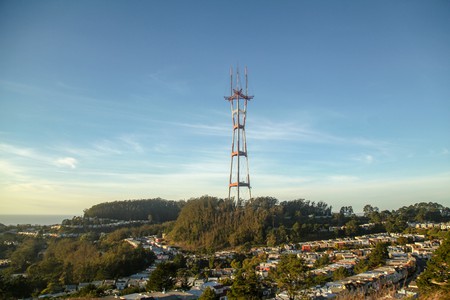 Hit the Mission for an authentic taste of San Francisco

The Mission District is known for its authentic vibe and its Hispanic influence. Many options for street food and taquerias (including the birthplace of the ‘Mission burrito’) are complemented by the Michelin-star restaurants, hipster mixology bars, and live music joints. Clarion Alley is worth a visit for its numerous murals done by the Clarion Alley Mural Project. Another neighborhood favorite is Mission Dolores Park, a green expanse perfect for picnicking on a mild San Francisco day. 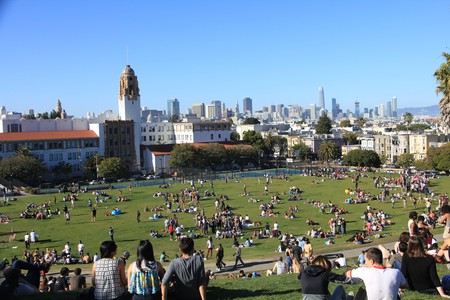 Eat lunch at the Cliff House and visit the Sutro Baths

At the western end of the city sits the Cliff House, an oceanside restaurant in the Outer Richmond neighborhood. A table near the large windows will provide you with endless Pacific views, made even more stunning at sunset. Adjacent to the Cliff House are the Sutro Baths, the ruins of a saltwater swimming area built in 1896. Wander through the crumbling walls and saltwater pools that are interesting pieces of San Francisco history. 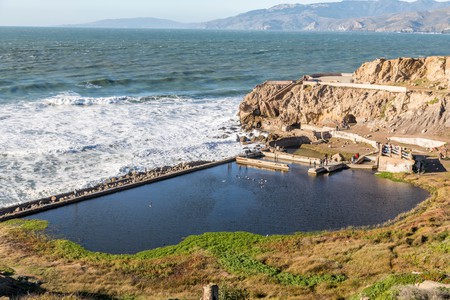 Remains of Sutro Baths along the sea front. | © Elizabethmaher / Shutterstock

For some of the best views in San Francisco, head to Land’s End Park within the Golden Gate National Recreation Area. The moderately strenuous coastal hiking trail leads you through both low-lying forest and out onto windswept cliffs – one containing a labyrinth made from rocks – and eventually ends with vistas of the Golden Gate Bridge. Some sections have stairs and rocky areas; be sure to wear sneakers and warmer clothing for the wind chill.