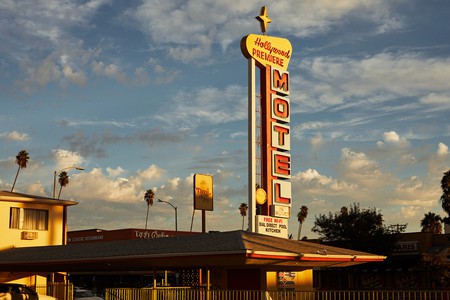 Hollywood is one of the biggest attractions in Los Angeles, but foodies are now heading Downtown for the best food in town | © Culture Trip

Once a neighbourhood best avoided, LA’s Downtown is now a must for visiting foodies. Colourful taco trucks and markets are the order of the day, making the most of the city’s year-round sun and taste for laidback dining. Whether you’re after Korean-Mexican barbecue or a spot of immersive drinking, things’ll be great when you’re Downtown.

It’s no secret that the Los Angeles food scene has exploded in recent years. From taco trucks and fusion concepts in the rejuvenated Downtown to long-established Hollywood staples, the city’s best dining spots offer a banquet of dishes reflecting LA’s diversity and ambition. Today, visitors to this showbiz-centric city are venturing beyond the glitz and glamour of Sunset Boulevard to find culinary delights in neighbourhoods on the rise. 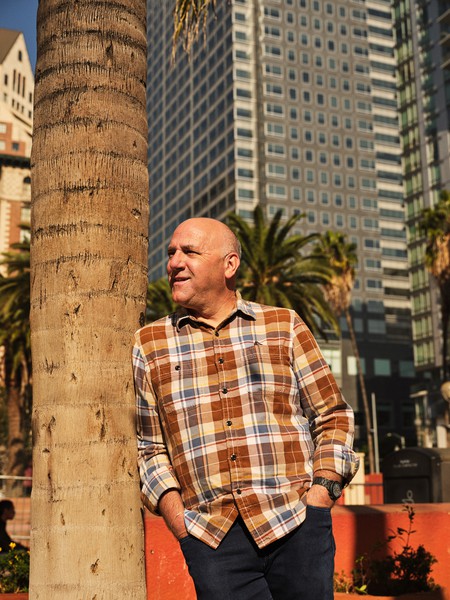 “I feel the food and restaurant scene in Los Angeles was very hot in the 1980s and early ’90s when Wolfgang Puck first opened Spago in West Hollywood,” says Tristan Daoussis, an LA-based location scout. “It was filled with celebrities night after night.” As well as working on Oscar-winning films such as La La Land (2016), Daoussis owns Heirloom Bakery & Cafe in South Pasadena. His passions for food and film are well served in LA, where the two worlds often collide.

One of Daoussis’s favourite restaurants is arguably as famous as some of the superstars who have dined there. “Musso & Frank has featured in so many films and TV shows. The service is amazing, and the food is classic old-school Hollywood,” he says. “The Rolling Stones dine at Musso’s when they are in town. Quentin Tarantino also eats here and prominently featured it in Once Upon a Time in Hollywood.” 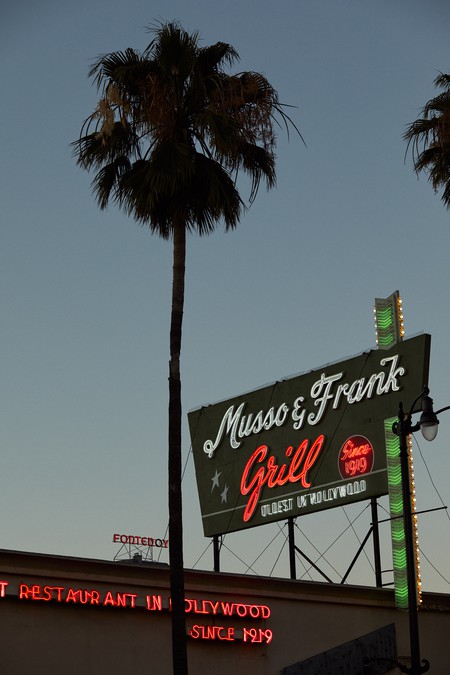 Musso & Frank sits on Hollywood Boulevard and has recently celebrated its centennial. A handful of other restaurants – Casa Vega, Cicada – also remain from Hollywood’s Golden Age, but most older establishments weren’t as successful in navigating the evolving trends and tastes of visitors. “The dining scene died for a while, but then there was the re-emergence of ‘celebrity chefs’ like Puck and Nancy Silverton in the ’80s, who put LA back on the map,” says Daoussis. ”And then this current moment: young, hip chefs like Jordan Kahn and Jessica Koslow taking the helm and leading the conversation.”

Daoussis’s job takes him scouting for film locations all over LA, but it’s a new district that has really captured his imagination. “If in Downtown Los Angeles, I love to get a French Dip Sandwich at Philippe’s [near Chinatown],” he says. “It’s incredible how quickly the area has evolved.” A string of new eateries, bars and food trucks have opened up Downtown, including a hugely popular outdoor food market, Smorgasburg. However, the transformation of this previously overlooked part of town into a place to see and be seen eating has not happened overnight. 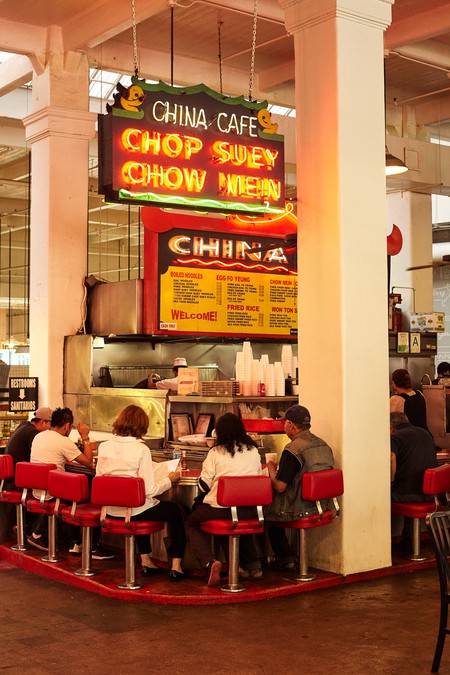 For years, Downtown’s primary attraction for foodies was Grand Central Market, a landmark that has been operating since 1917. Its packed covered walkways are home to countless food stands that have been featured on screen so many times they may already feel like local haunts.

But it was television that really introduced the Downtown area to a wider audience, specifically Anthony Bourdain’s food travelogue Parts Unknown. Bourdain showcased the best of LA’s food scene, including an in-depth segment on Koreatown, which was then rather unfashionable. Foodies had known about it and other districts for a while, but Bourdain’s energetic show stoked broader interest in Little Tokyo, Historic Filipinotown and Little Armenia. Roy Choi, the man who helped guide Bourdain around Koreatown, led the charge, and he remains the most recognisable name on the food circuit here with his Korean-Mexican concept Kogi BBQ. 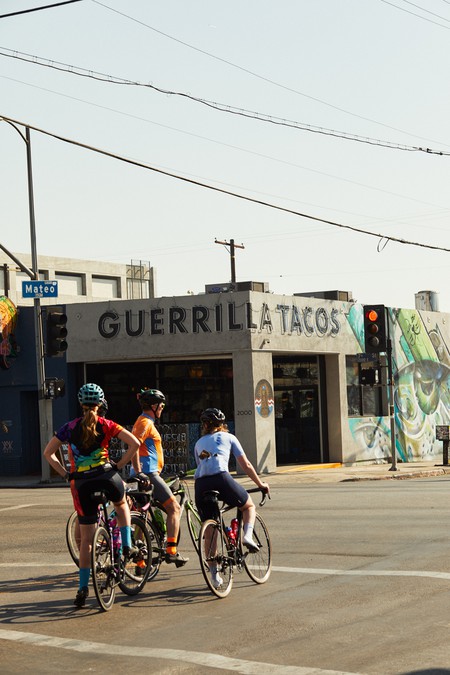 Colourful food trucks were also a major factor in the second wave of a dining revolution in LA over a decade ago. Colloquially known as taco trucks, these restaurants on wheels serve food that in reality spans a variety of cuisines. Following Choi‘s lead, hundreds of trucks have appeared on the streets of Downtown, and many travellers now venture into parts of LA that were previously considered to be out of bounds for tourists to sample the authentic, local dishes they’ve heard so much about.

“Food trucks are here to stay. LA will always have a need for them,” says Wes Avila, chef-owner of popular Downtown restaurant Guerrilla Tacos. And he should know: the Los Angeles native has set up a bricks-and-mortar venue after a successful run on wheels, taking his fresh take on Mexican classics from the streets to a popular shop.

A recent surge in infrastructure development, partly in preparation for the 2028 Olympic Games, has sped up revitalisation. Improved public transport has made previously inaccessible parts of LA fall within the reach of all visitors to the city. The knock-on effect is that vast warehouses, which not so long ago sat empty, are now being turned into luxury apartments and boutique hotels. The defining symbol of the Downtown revival is ROW DTLA – a redevelopment of half a dozen 1920s buildings encompassing shops, workspaces, pop-ups and restaurants, including the former LA Terminal Market. 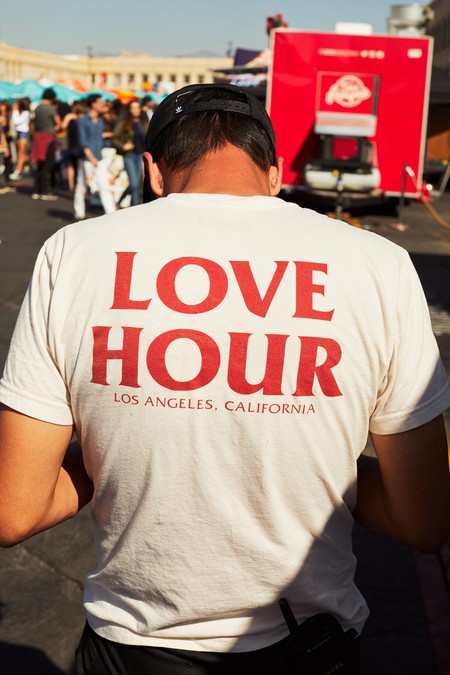 This is where you’ll find Smorgasburg, an offshoot of the Williamsburg, Brooklyn, original. Described as the “Woodstock of Eating” by The New York Times, this marketplace of street food vendors reflects the ever-changing trends in dining and drinking, and has attracted millions of visitors since it opened in New York in 2011. The LA version opened five years later and has proved equally successful.

If you head down on a Sunday you will come across the popular Hawaiian food stall Shrimp Daddy, founded by June Quan. A former attorney, Quan found fame as a food blogger before opening her own business. Smorgasburg’s array of eateries made it the perfect launch pad. “One of the things I love most about living in Los Angeles is that I can find authentic food from so many different cultures,” she says. “LA is a melting pot, which brings not only people together, but our food too.” 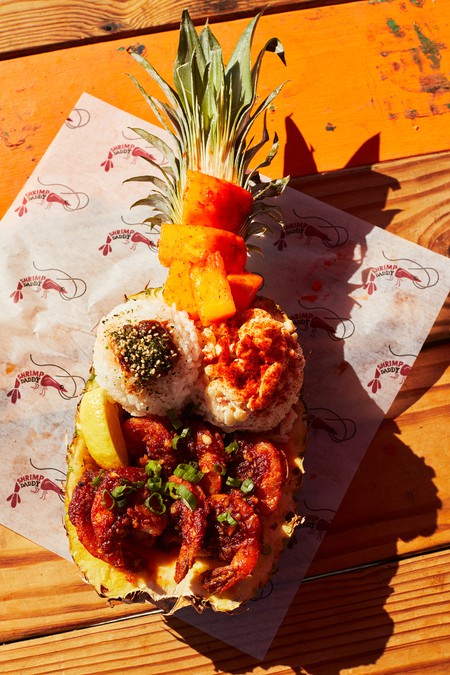 Another business flourishing in Downtown’s thriving scene is the Lost Spirits distillery. It offers a unique concept that combines Hollywood’s signature theatrics with the finest spirits to create an immersive experience. 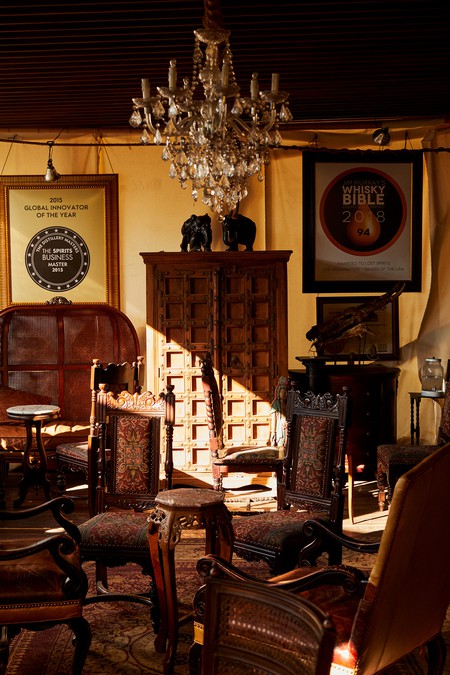 “Downtown has been in flux for 30 years,” he says. ”I’m not old enough to remember it when it was crazy dangerous, or its punk rock days, but today it’s a fun mix of the obligatory coffee shops and great bars, salt-and-peppered with the time-worn grit of its historical layers.” Lost Spirits could only have thrived in a place as diverse as LA, says Davis: “It’s the creative capital of the world. And we discovered it was pretty easy for us to fit in with a city of creatives.”

Downtown is now leading LA when it comes to food and drink. This once overlooked part of the city is an essential stop for those in the know.