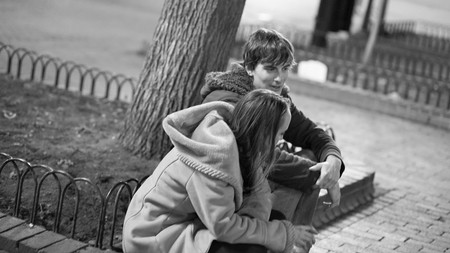 The Overheard Instagram scene is a phenomenon of compiled conversational snippets submitted by real eavesdropping citizens. Growing more popular with every post, it has finally emerged in San Francisco.

Cities across the world have set up Instagram accounts that set the stage to catch people mid-conversation, out of context, for the sake of pure entertainment. The first Overheard feed started in Los Angeles as @overheardLA. Shortly after gaining hundreds of thousands of followers, the East Coast mustered up @overheardNewYork.

Now entering the scene to listen in on random city people coming out of spin class, or catching part of their conversation as they turn down Montgomery Street, comes San Francisco. And not only does the city itself have an Instagram, but Overheard is starting to spread into the each of the city’s unique districts.

With a following of nearly 30,000, San Francisco’s Marina District— known for its shopping boutiques and Golden Gate Bridge views—@OverheardMarinaSF is letting everyone in on the district’s chit-chats.

But we have two movie theaters on Chestnut St 🙄 O.h. by @mirkatzzz

While it’s unfortunate the Marina District doesn’t have a Trader Joe’s, at least it can say it’s one of the first districts to get an Overheard Instagram account. The page boasts its amity with the neighborhood with a funny quip as its bio: “Blue Barn on the streets, Blue Light in the sheets.” The tagline refers to acting as appropriate in public as Blue Barn—one of the Marina’s top gourmet eateries— but in the privacy of the Marina homes, act as rowdy as Blue Light—one of the district’s late-night sports bars.

When he doesn’t make you split the bill but you still make it rain. O.h. by @chalmce_the_rapper

With a number of followers that just broke into triple digits, @OverheardMissionSF is still getting its footing in the Instagram world. With that said, it doesn’t mean the eavesdropped tête-à-têtes aren’t any less colorful.

We'll eventually be able to afford real bedrooms one day, right? Like the ones on Valencia. #overheard #overheardmissionsf #sf #sanfrancisco #missiondistrict

The posts, are variously colored, too—extraordinarily fitting for the artistically expressive district. The vibrant posts and floral street-art design logo reveals that the mastermind behind the account knows the Mission well—even its quirks.

Nothing like the start of Friendsgiving season. #overheard #overheardmissionsf #missiondistrict #themission #sanfrancisco #friendsgiving

The city as a whole has @SFOverheard. With a modest (by social media’s standard) following of under 8K, the page is picking up momentum as the leading Overheard San Francisco account. It’s easy to see why, with the amusing overheard tidbits that make up the feed, and how the posts effortlessly adhere to what life is like as a San Francisco resident.

The classic Eat, Pray, Code ⌨️ Another option is to jump into a new relationship so you never have to self-improve – that’s how I do it! 🌱 o.h. by @lavidavino ✨

@SFOverheard’s feed comes from submissions all over the city—from the Tenderloin, North Beach, Financial, to the Castro—there’s a post that briefly opens the curtain to what’s happening at any given place in the city, at any given moment. If enquiring minds ever wanted to take a peek at the funny, out-of-context stuff people are talking about on the crosswalk between Columbus Avenue and Washington Street, or at the local café, bar, or roller rink, @SFOverheard is the one-stop shop for that.

I would spend that $130 on a @warriors ticket even if I need a telescope to see the game 🏀 o.h by @jtissy ✨ #fixedthetypo #brunch #notbunch