How Los Angeles’ Muscle Beach Got Its Name 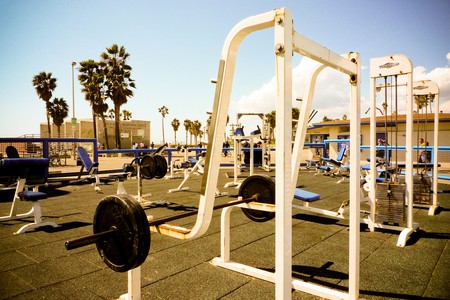 Those who visit Los Angeles’ beaches today can find Muscle Beach Venice alongside the famed Boardwalk. It’s an open-air gym where people pump iron on a regular basis. However, the original Muscle Beach was not located in Venice. It began in the 1930s in Venice’s neighbor, Santa Monica.

In the 1930s, President Franklin D. Roosevelt’s Works Progress Administration (later called Works Projects Administration) was putting people back to work after the Great Depression. Several Los Angeles-area projects evolved out of the WPA, including the Griffith Observatory and improvements to Griffith Park. One project was the installation of a variety of fitness equipment south of the Santa Monica Pier. Visitors could come and freely work out, mostly participating in gymnastics, acrobatics, and weightlifting. The fit bunch of regulars also drew spectators, who came to see them perform their feats of strength.

Abbye “Pudgy” Stockton and her husband, Lee Stockton, were well-known regulars there. Lee Stockton told the LA Times, “We were all young and innocent back then. We didn’t know we were creating the physical fitness movement. We were just having fun.”

Harold Zinkin, the author of Remembering Muscle Beach, echoed that sentiment, telling the newspaper, “By observing the athletes’ exercise routines and their impromptu shows, people picked up the not-so-subtle message of fitness. Besides, it was great free entertainment, something Americans needed in those days.”

By the ’40s, the area had earned the moniker “Muscle Beach,” due to its toned performers. Bodybuilders such as Joe Gold (of Gold’s Gym) and Jack LaLanne worked out there. Some would come to stay in a nearby boarding house known as Muscle House. “Muscle Beach” wasn’t the only nickname along the shore. There was also a “Brains Beach” on the north side of the pier—so named for the UCLA students that would frequent the area.

By the ’50s, Muscle Beach was drawing huge crowds, which only drew the ire of the City of Santa Monica. They felt like the attraction was bringing in unsavory types, and when a group of weightlifters was accused of statutory rape, it fueled that notion. The city removed much of the equipment overnight. Muscle Beach was gone as of 1959, and bodybuilders moved two miles (3.2 kilometers) or so down the beach to a weightlifting pen, built in the early ’50s, in Venice. 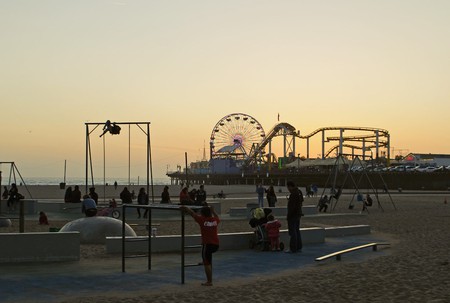 As the outside gym in Venice grew, it also attracted celebrity bodybuilders, including Arnold Schwarzenegger and Danny Trejo. Today, the City of Santa Monica retains the name Muscle Beach, and it revitalized the original area in 1999. It mostly consists of gymnastics equipment these days. Meanwhile, the City of Los Angeles declared their own Muscle Beach “Muscle Beach Venice” in 1987 to differentiate the two. Today, you can find people working out while taking in the ocean breeze and participating in the occasional competition. A day pass is $10 if you want to get buff yourself; spectating is always free. 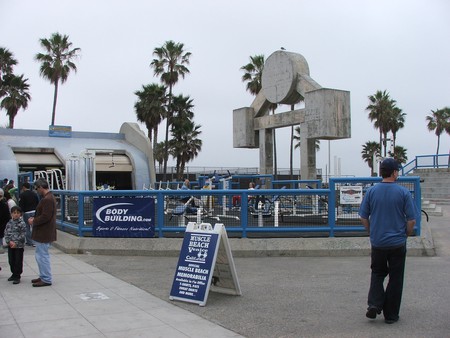