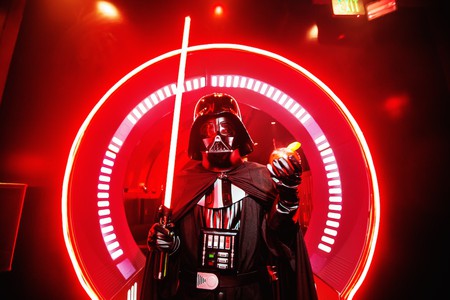 Sometimes, even Vader needs to unwind | Courtesy of The Dark Side Bar

Hollywood moviegoers may want to cap their viewing of The Last Jedi with a stop at a Sith-approved watering hole. The Dark Side Bar is open now through January 14, 2018, offering a scarlet-hued place to toss a few back while waxing about the days of Palpatine.

The pop-up sits on the third floor of the Hollywood & Highland mall within the TCL Chinese Theater—the same theater where Star Wars: A New Hope premiered in 1977. Both food and cocktails will be available. Expect vegan sushi egg rolls (they appear on the menu as “bantha fodder,” a term used to describe the type of food a bantha might eat) and BBQ octopus skewers. Cocktails come with franchise-appropriate names such as Red Force, The Mind Trick, and The Imperial.

The Dark Side Bar is actually Hollywood’s second Star Wars pop-up bar. The first, Scum & Villainy, played on Chalmun’s Cantina, the Mos Eisley bar where Obi-Wan and Luke first encounter Han Solo. Obi-Wan famously described the scene as “a wretched hive of scum and villainy.” This bar, however, takes its cue from Imperial starships and Sith color palettes, so a lot of black and red and circular doorways. 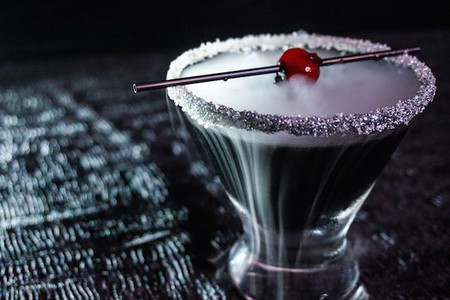 The Galaxy cocktail | Courtesy of The Dark Side Bar

Guests are encouraged to come to The Dark Side in costume—a black cowl usually does the trick—though it’s not mandatory. Nightly activities may include burlesque, alien speed dating, DJs, and games. You’ll probably want to bring a friend because everyone knows that Siths always come in pairs. You’ll have to figure out who’s the master and who’s the apprentice on your own, though.

The bar is open Wednesday through Saturday, 6 p.m. to 2 a.m., and Sundays from 6 p.m. to midnight. Reservations are $33 in advance or $40 at the door; both include two cocktails per person.