A Tour Of The Mission’s Best Street Art

With the largest concentration of street art in the world, San Francisco’s Mission District is home to murals as diverse as its multicultural population. The neighborhood’s 500 murals are virtually a free outdoor art museum full of powerful political messages in a community experiencing immense socioeconomic change. Because navigating the whirlwind of colorful storefronts and alleyways can be overwhelming, check out this helpful do-it-yourself tour.

In the 1930s, as a part of the New Deal, Franklin D. Roosevelt set up the Works Progress Administration to assist in economic revival. The WPA funded artists in all fields to create works that would boost morale and national pride. Some of San Francisco’s greatest landmarks were WPA projects, including the Golden Gate Bridge, and the city now has more WPA projects than any other city in the country besides New York City.

The first WPA mural ever was created in 1934 in the interior of Coit Tower by a group of artists depicting the harsh realities of living in California during the Great Depression. The style of these WPA artists, which drew on Mexican artists like Diego Rivera, heavily influenced the style of many of the murals we see today in the Mission District, the oldest of which are from the 1970s. In the 1990s, the modern mural scene exploded with what has been dubbed the “Mission School,” a group of artists with influences in graffiti art, pop art and hip-hop in what became known by many as the most significant late 20th century San Francisco art movement. This movement gave birth to many of the mural projects that adorn the neighborhood to this day, including the famous Clarion Alley. 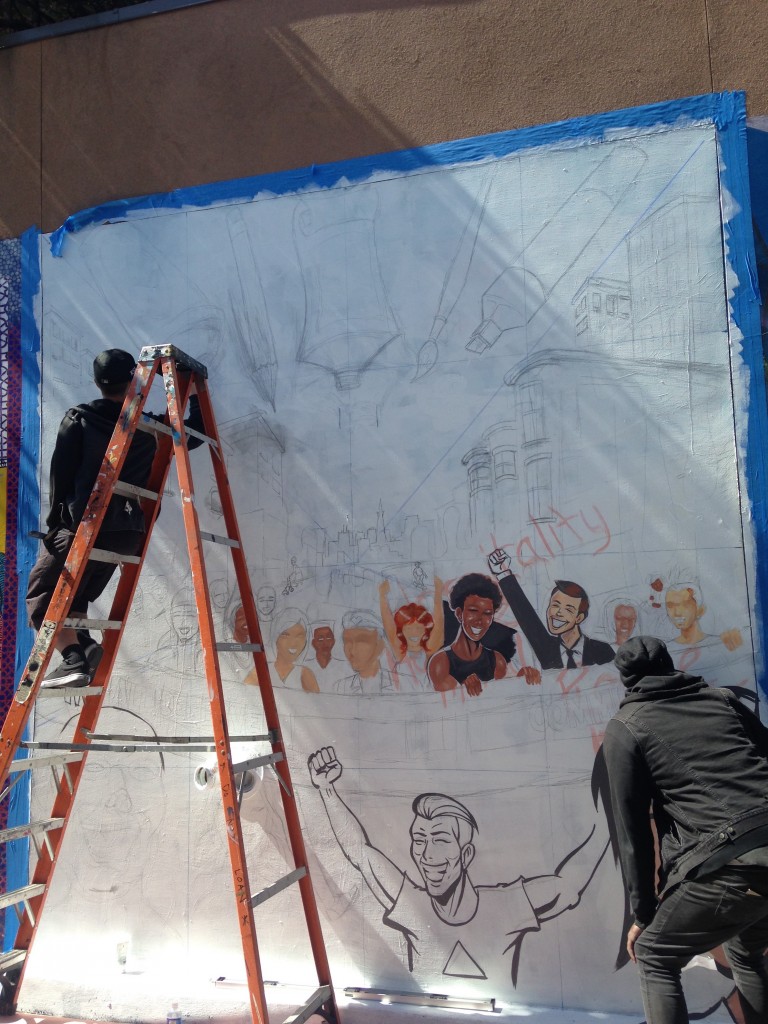 Take the BART to the 16th and Mission Street station. Walk up Mission Street towards 17th Street. In between 17th and 18th Street, our first stop is on the right and one of the most iconic of the Mission’s street art scene: Clarion Alley.

The Clarion Alley Mural Project is an evolving artistic collaboration that runs the length of one city block. The project was founded in 1992 by a group of Bay Area artists and has since been home to over 700 murals. Because the murals are always changing, each visit can offer a different experience for locals. Wandering through the alleyway offers artistic perspectives on some of San Francisco’s most controversial issues: rising income inequality, police brutality, corporatization and others. Murals have also cropped up to honor specific individuals, for example, Mel Waters’ Rest in Purple is a beautifully detailed black-and-white portrait of Prince, with purple paint dripping on its side. 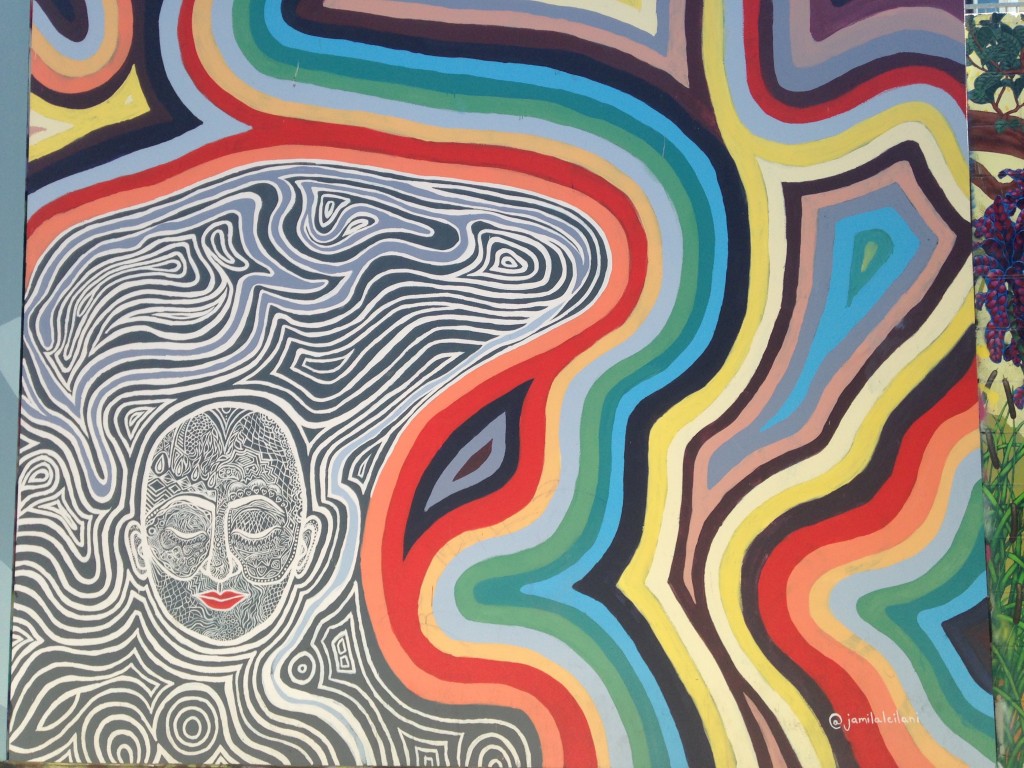 Next, get back onto Mission Street and turn right on 18th Street. About a block past Valencia Street is the Women’s Building. The building’s exterior walls are adorned with the MaestraPeace mural, a massive work that pays homage to famous women. The work was painted in 1994 by seven Bay Area female muralists and was restored in 2012. The building is painted on two of its sides – the front entrance, facing 18th Street, and the side facing Lapidge Street. Its front entrance features a naked, pregnant goddess with butterfly wings, grasping the sun as its rays shine down. Rigoberta Menchu, an indigenous people’s activist, towers over the Lapidge Street side, with Georgia O’Keefe and a slew of other famous faces below her. 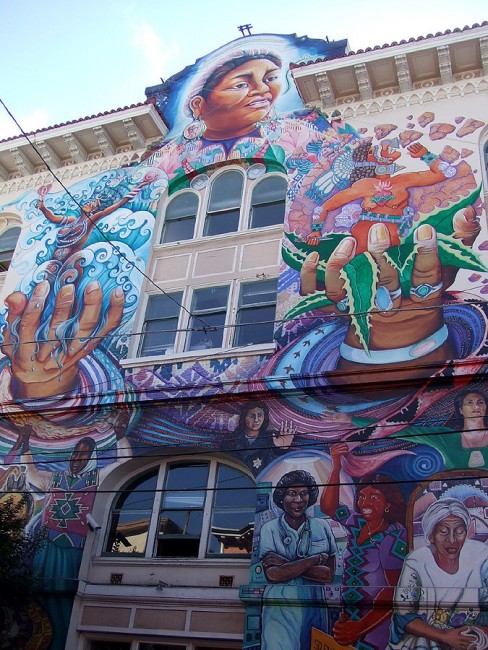 Walk up to 24th Street and turn left. Murals cover storefronts and walls everywhere in this epicenter for business for the community’s traditional Latino residents. Many of the buildings have been there since the arrival of Mexican immigrants to the neighborhood in the 1940s and 1950s.

Turn onto Lilac Street on the right. Lilac Alley, along with neighboring Cypress and Osage alleys, was organized by Mission Art 415, which gives supplies to local and international street artists and provides them with a safe environment to produce their work. Though the work in this alley is also constantly changing, many of the current murals feature complex and colorful calligraphy. Cypress Alley is another two blocks down, right before South Van Ness.

The House of Brakes stands at the intersection of 24th Street and South Van Ness Avenue. Above the repair shop is a recently restored, lifelike mural based on photographs of the first Carnaval Parade in 1979. The mural morphs into the houses whose sides it adorns, incorporating the windows into the art. The realistic colorful dancers in elaborate feather getups march down the street joyfully and almost seem to be heading straight towards the viewer.

On the side of the building next to the House of Breaks in the same parking lot, there’s another mural in the much more traditionally colorful Mexican style, depicting drummers and dancers in mostly red and orange tones. 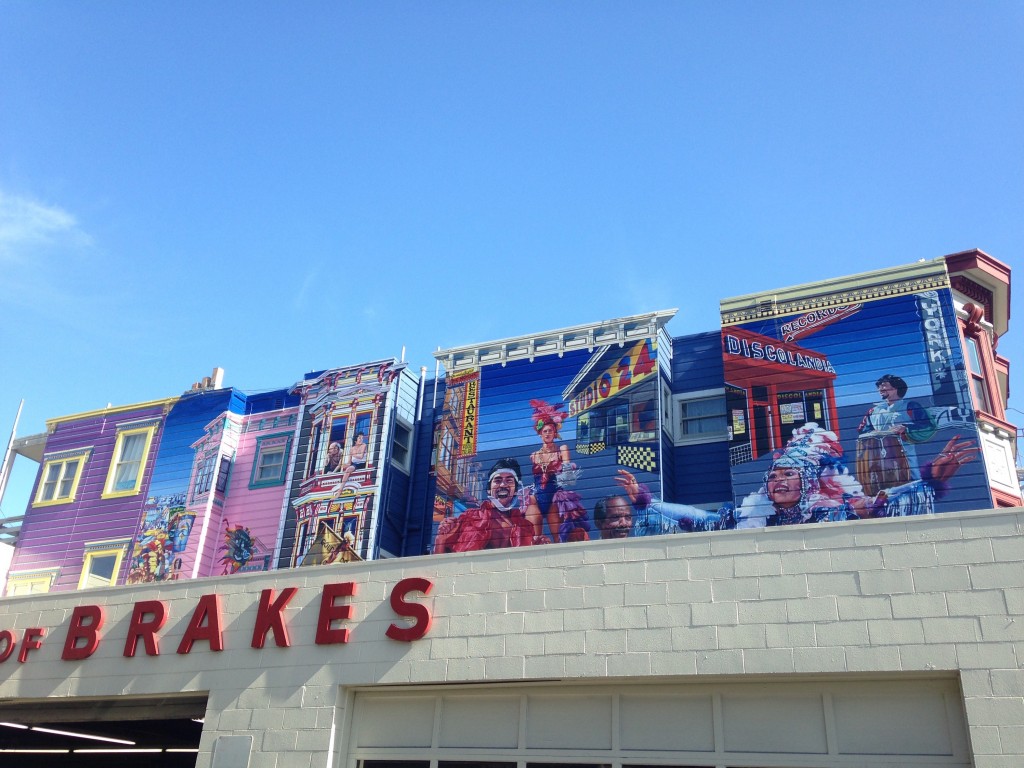 Next, head back onto 24th Street and walk up to Balmy Alley, located right before the intersection with Harrison Street. Balmy Alley is the oldest of the mural projects–the first artist painted on the back of a building there in the early 1970s. It became a prominent place for artistic activism in the 1980s, depicting images of human rights and political abuse in Central America. Now, the alley’s art still has a focus on human rights but also includes topics of gentrification, police brutality and many of the issues commonly addressed in San Francisco’s street art. 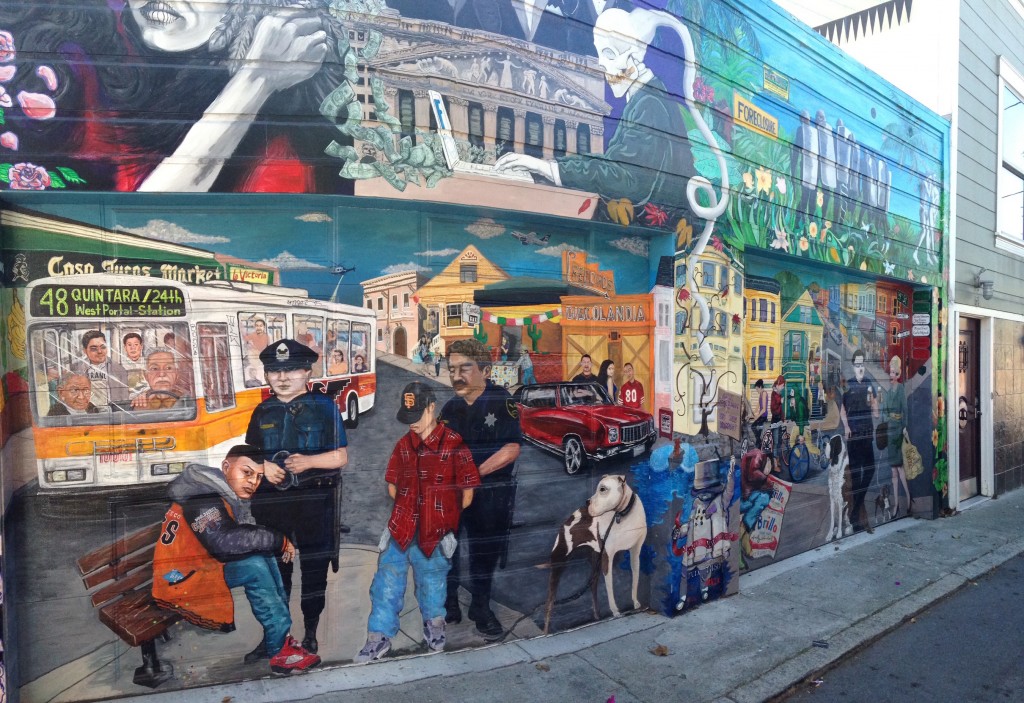 Turn on Harrison Street and then right on 25th Street to make a circle back around past Lilac and Cypress alleys towards the BART station. One block past Mission Street is the two-block long Osage Alley, one of the previously mentioned street art collections organized by Mission Art 415. It currently features one of four murals painted around the Mission in February of 2016 for Black History Month. This installment is a black-and-white portrait of Nelson Mandela next to words celebrating the date of his release from prison.

Head two more blocks down for the last stop on the tour: Orange Alley. In addition to being home to more vibrant street art, the alley is famous for Peephole Cinema, which shows silent films 24/7 through a tiny peephole in one of the alley’s walls.

Finish the tour by walking through Orange Alley and turning right to get back on 24th Street, where the 24th Street and Mission BART station can be found a few blocks down.