Gold and Chocolate: Everything to Know About Ghirardelli Square in San Francisco 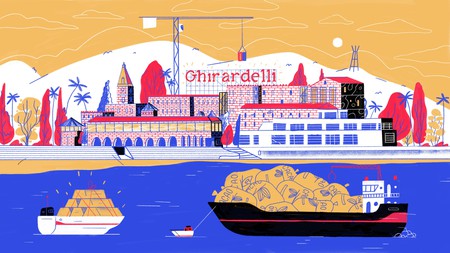 The popular and lively Ghirardelli Square in San Francisco has a history founded in a famous chocolate brand, the gold rush, and one of the first recyclable building concepts in the USA.

Like other west coast cities in North America, San Francisco boomed after gold was discovered “in them ‘thar hills” near Sutter’s Fort in 1849. Overnight (OK, more like two years), the city transformed from a backwater of 1,000 residents to more than 20,000. Among them was Domenico Ghirardelli.

The Italian native was not yet known for his name, which would eventually become famous thanks to the Ghirardelli Chocolate brand. Initially, Ghirardelli was living in Peru in the 1840s, working in the local chocolate and coffee trade. Ghirardelli chocolate, however, arrived in San Francisco before the man himself. James Lick, an American businessman, philanthropist, and Ghirardelli’s friend, left Peru in 1847 and headed for a fresh start in San Francisco. He is the name behind Lick Observatory and the Conservatory of Flowers, among other San Francisco institutions. Lick brought 600 pounds of Ghirardelli’s chocolate with him, establishing a marketplace for the chocolatier and his singular product.

From gold to chocolate

Lured by Lick, Ghirardelli moved north to San Francisco in 1849. His intent, like so many others, was to dig his fortune out of the golden hills, but his skills as a chocolatier and merchant triumphed over a mining career. By 1852, Ghirardelli had shops in San Francisco and Stockton and was importing hundreds of pounds of cocoa beans from South America. By 1893, Ghirardelli was importing upwards of 450,000 pounds of cocoa beans annually and employing more than 30 people at his chocolate factory. Seeking a bigger space for this bustling business, Ghirardelli purchased the Pioneer Woolen Building, the present-day site of Ghirardelli Square, moving the Ghirardelli Chocolate Company and factory into the two-story brick building.

The building remained a chocolate factory and home to the Ghirardelli family business for another 66 years. The famous illuminated sign over the building was added in 1923, around the same time that the building expanded to four floors. But by 1960, the factory was shuttered when production moved to a modern, custom-built facility in the San Francisco suburb of San Leandro. The now-abandoned edifice at the corner of North Point and Larkin streets was soon purchased by a group of San Francisco-based investors who saw the building’s potential beyond its life as a factory. It was the beginning of a reuse movement that re-animated buildings in cities around the US and the world.

In support of the National Historic Preservation Act

In the United States, repurposing existing buildings from industrial to retail and housing soon became a federal effort at preserving the country’s communal heritage. The National Historic Preservation Act, passed in 1966, standardized the process for historic preservation of landmark structures and set up a list of significant monuments.

Though Ghirardelli Square was ready for its new life as a retail and dining hub, reopening in 1964, the Act created an incentive to rebuild instead of tear down, encouraging investors to preserve and revitalize projects in Boston (Faneuil Hall), Arizona’s Grand Canyon (Desert View Watchtower) and Saint Louis (Union Station), among many, many others. Perhaps inspired by the effort in the United States to preserve this cultural heritage, Tokyo undertook a series of urban renaissance projects beginning in the 1980s, as did Glasgow in Scotland, Delhi in India, and Seoul in South Korea.

Preservation and reuse are a crucial part of the culture and the unique identity of any city. Not only are historical buildings a link to our past, they contribute to a city’s economic well-being and boost the vibrancy of street life. In San Francisco, Ghirardelli Square showcases the neighborhood’s early roots as a hub of industry and supply center for the city. It acts as a daily reminder of the immigrants and laborers that built the town into what it is today. And as a hub of restaurants and shops, Ghirardelli attracts locals and tourists – and their dollars – to the neighborhood.

What to do today at Ghirardelli Square

After years (and years) of tourist-friendly fare (read: not that great), Ghirardelli recently went through a reboot, bringing in new local businesses and eats that are as good as any in the city. The Cheese School recently moved here from the Mission, with hands-on classes upstairs and cheese-centric fare downstairs in the café (go for the grilled cheese sandwich made with three distinctly local kinds of cheese). Latin street food with a focus on Central America is on the menu at Pico (try the spicy grilled chicken torta). There is a brewpub with a chill, totally local vibe and a place for barbecue along with a winery. Of course, there is chocolate. Ghirardelli maintains a threefold presence at the Square, including the flagship of the Original Ghirardelli Ice Cream and Chocolate Shop. The lines, as ever, are insane.