A fact known to few from beyond the neighborhood, the infamous OJ Simpson is from San Francisco’s very own Potrero Hill. Since the 1990s, the neighborhood has experienced high levels of gentrification, becoming a popular area for upper-middle class families, but back in the 1950s in 1960s, during Simpson’s formative years, it was populated primarily by a low-income, working class community. Simpson’s journey to professional football and fame represented a rare success story for the neighborhood’s citizens.

In 1987, Nicole Emanuel memorialized Potrero Hill’s culture at the time in a mural on Connecticut St. The mural features colorful scenes from around the neighborhood, and in the center is an image of OJ himself, decked out in the very symbol of his success – his football uniform. 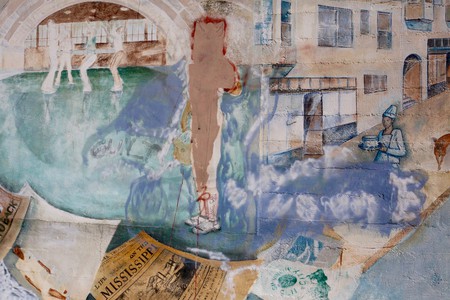 Along with Simpson’s career and fame, the mural has changed quite a bit since its creation in 1987. After Simpson’s infamous murder trial, Potrero Hill citizens rebelled against his association with the neighborhood by defacing his representation in the mural. Les Carpenter of The Guardian described the vandalism that has appeared on the mural: “One painted a red circle and a slash through OJ’s head. Another added devil horns and a knife. Someone scrawled the word Guilty beside his legs… The most famous football player from this year’s Super Bowl city is completely gone from her mural. Someone has doused Simpson in paint the color of a Band-Aid, leaving OJ an empty, faceless shell with the silhouette of horns on its head.” 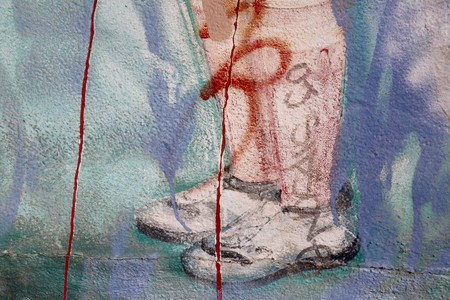 Emanuel has allowed this vandalism to remain. “He was supposed to be a good piece of the puzzle,” Emanuel asserts. “Now he’s a bad piece.” As Carpenter declares, “Such a work of public art is an open statement of its community. In the case of hometown hero OJ Simpson, the people of Potrero Hill had spoken.” 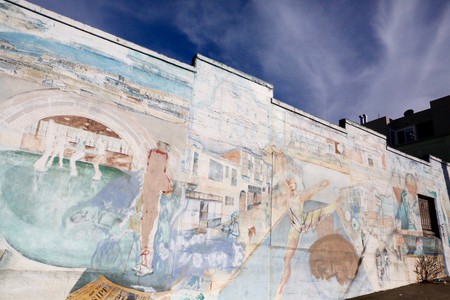 Other members of the community seem to be wilfully accepting this dismissal of Simpson from their history. Edward Hatter, Potrero Hill Neighborhood House director, chooses to minimize Simpson’s significance to the Potrero Hill community. “He’s another one who came out of the housing to end up in prison. There was a bunch of big stuff in between, but he was just a guy from the Hill who did something dumb and wound up in prison.”