The Top 10 Things to Do in the Castro, San Francisco 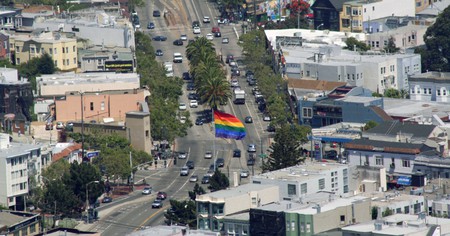 The Castro District has something for everyone, from glorious Bay views to scores of stores with locally made goods and sing-along musicals in one of the oldest movie palaces still operating in the city.

It’s pretty much impossible to confuse the Castro with any other part of San Francisco. The rainbow banners hanging from the streetlights help identify it immediately. Then, of course, there’s the occasional nude guy ambling by, as well as the scores of signs overhead advertising double-entendre business names (for example, there’s a laundry called Sit & Spin). It’s all part of the local culture, committed to pride for its identity and the freedom that is indelible from love. Read on for the best attractions the district has to offer.

Ride in on the F-Line

Anyone who’s seen a box of Rice-A-Roni knows that streetcars are a big part of the San Francisco experience. It just so happens that the F-Line streetcar terminates at the northern border of the Castro District. Granted, these won’t be the lumbering red coaches that ferry folks from the waterfront to Union Square. But who cares? Streetcar rides are best when they’re romantic, quaint and even whimsical. At a minimum, they should be a lot more fun than an Uber. The green variety that brings you to the Castro fits that bill and should earn a bit of your spend and attention. 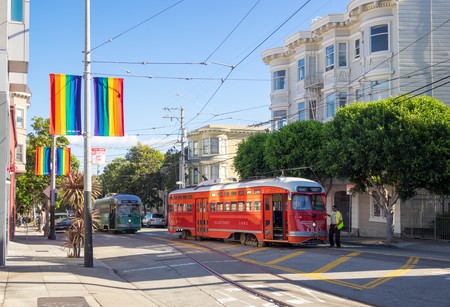 The Castro Theater is the city’s last remaining movie palace. It’s also one of the beating hearts that unites the neighborhood. New and newish movies play regularly, but the Castro Theater is at its best when putting on one of its signature special programs. The Midnight for Maniacs series, for example, shows weird and obscure flicks that variously confound and titillate. Double and triple features regularly play on the weekends, and the theater hosts several of the area’s top film festivals. Most notably, perhaps, the Castro will put on sing-along showings of classic and contemporary musicals, as well as special screenings with filmmakers on hand for Q & As. Check the theater’s calendar for the latest on what’s playing. 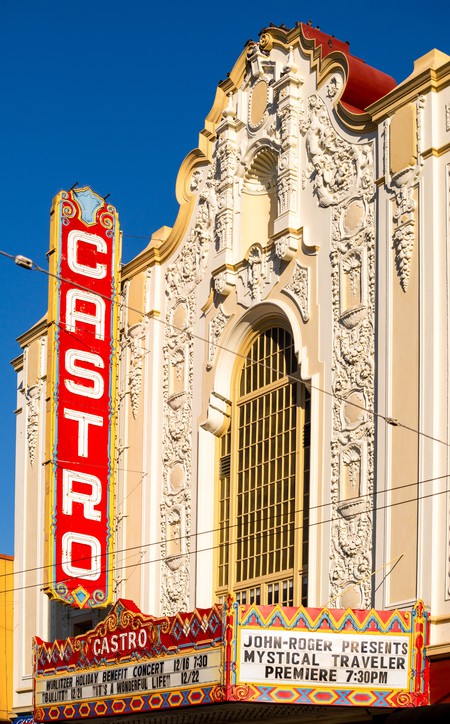 Bargain hunters visiting the Castro are in for a treat. Second-hand stores are all over, and usually look like they’re filled to capacity. With so many stores to choose from, the trick is to do a little research and be picky about where you spend your valuable time. Siu Generis is a designer consignment store with very discerning tastes. Their website lists which brands they’re willing to take, and it reads like a list straight from a fashion week. From McQueen to Murad, they have it. Anyone who wants something a little more lowbrow should gravitate toward Local Take, which stocks locally made pieces that celebrate the city of San Francisco. It’s all very custom, and very unique.

The Castro comes with a potent combination of extreme walkability and great bars. Each venue offers a different vibe. Moby Dick on 18th is a longtime local favorite and features an enormous saltwater fish tank above the bar to facilitate conversation between strangers. Midnight Sun is more interactive, with live entertainers and plenty of theme nights, as well as a two-for-one happy hour that lasts until 9pm. HiTops has a sports-pub vibe, along with the following motto: Cold pitchers, hot catchers. Regardless of where you choose to hang out, be prepared to socialize. 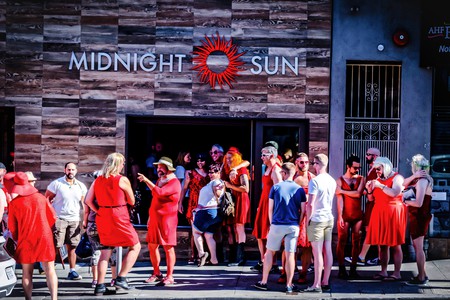 Harvey Milk is a San Francisco icon. He was the first openly gay elected official in California, winning a seat on the city’s board of supervisors to represent the residents of Castro and other areas. Milk was assassinated in 1978, along with then-mayor George Moscone, by fellow supervisor Dan White. This photo center is dedicated to Milk’s memory, honoring the man for one of his life’s passions: photography. The Harvey Milk Photo Center is the “oldest and largest community wet darkroom in the United States,” offering visitors the chance to view exhibitions of work by prominent photographers, as well as classes for all skill levels. Taking one of their classes is the perfect way to get acquainted with this part of the city while learning a new skill.

The Castro Street Fair was founded by Harvey Milk in 1974 to celebrate the creativity of the Castro community, with all proceeds going to charity ($55,000 was donated in 2017 alone). Artists, organizations and live entertainers flood the streets to connect with locals and visitors while promoting causes dear to the LGBTQ community. Four separate stages offer music for various tastes, like the groovin’ house music in Dance Alley or the country and western stuff played at Sundance Saloon. If you’re in San Francisco during early October, the Castro Street Fair should be on your radar. 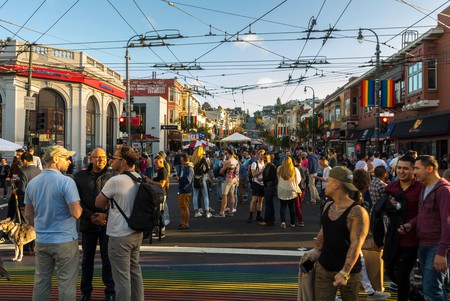 This small wonder has been bringing joy to the residents of the Castro for decades. Back in the ’60s, there was a small plot of land slated for development, but local activists convinced the city to designate the area as a community park. They installed a garden and local artist Ruth Asawa hosted a competition to figure out another use for the space. A 14-year-old named Kim Clark submitted the design for a slide and won. Today, the Seward Street Slides are open daily except for Monday, from 10am to 5pm. Cardboard is recommended for maximum speeds. Don’t worry if you didn’t bring any, as a good piece can usually be found at the bottom of the slides.

Hang out at Mission Dolores Park

Mission Dolores Park sits at the confluence of several disparate neighborhoods, attracting a diverse crowd that has been described as a cross section of San Francisco life. The park is so popular that one of the benches – situated near the southwest corner widely known as “Gay Beach” – has its own Yelp page, and a five-star review, no less. The park is San Francisco’s Spanish Steps. It’s a place to see and be seen. It’s where people go to unwind, sitting under the sun with a bottle of rosé or a beer in a paper bag. But it’s also where residents and visitors alike can go to see in real time the changing demographics of the cultures that comprise the city. 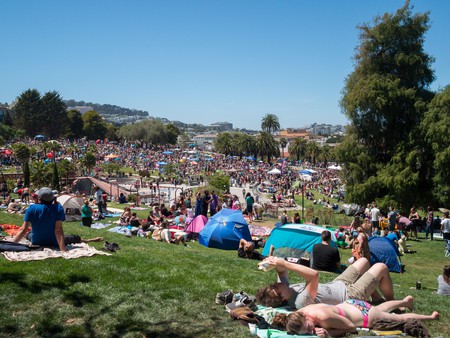 Ring in Christmas at Tom and Jerry’s House

Of all the reasons to visit the Castro, Christmas rarely comes to mind. It should, though, if only for one couple’s devotion to wild decorations. The Tom and Jerry House is a local holiday secret. Owners Tom and Jerome deck the exterior of their home with stuffed animals, wreaths, garland, enough lights to be seen from space and a gigantic pine tree with larger-than-life presents sitting underneath. Two overstuffed stockings are placed above their garage to make the whole front of the house seem like a giant fireplace. Santa even appears nightly to listen to what everyone wants for Christmas. It’s as extra-special as Christmas gets, and it’s worth a visit if you happen to be in town around the end of the year.

Paying respect to a tragic history

The Castro has become a center and a haven for the LGBTQ community. There are several monuments and organizations located in the district that are worth a visit to learn more about the community’s struggle for equality. The Rainbow Honor Walk is a series of bronze plaques in the sidewalk that honor and highlight LGBTQ individuals who made the world better. The Pink Triangle Memorial Park is a set of granite pylons that signifies the atrocities, the murder and the persecution inflicted on homosexual men in Europe by the Nazis. It reminds us so that we may never forget. The GLBT Historical Society and Museum leverage the society’s archives to mount exhibitions that “demonstrates the importance of queer history to the public.” 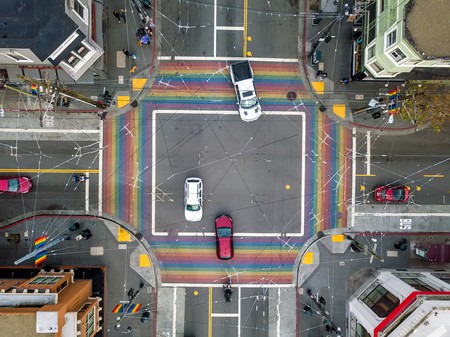